The Birdwatcher by William Shaw: A review 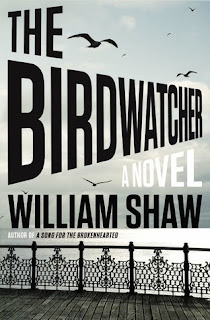 This one wound up on my reading list, I'm sure, because of its name. But there it has sat for many months. Now I'm trying to read some of those books I have neglected before the end of the year. It's The Birdwatcher's turn.
The birdwatcher of the title is Kent Police Sergeant William South. When it comes to his job as a detective, he would definitely rather be birding. He prefers to do his detecting from behind a desk. He doesn't want to be out in the field actually investigating. He particularly does not want to be asked to investigate a murder. He has his personal reasons for feeling this way. They go back to his childhood and the narrative goes back and forth between his childhood in Belfast and the present in Kent to give us all the backstory.
But then necessity causes his superior to team him with a strong-willed Detective Sergeant just transferred from London named Alexandra Cupidi. Together they discover the body of a man who had been savagely beaten and stuffed into a wooden box. It is South's worst nightmare - a murder to investigate. And making it worse still, the victim is his friend. Maybe his only friend, a passionate birder like himself.
He declares his relationship with the victim, hoping it will get him taken off the investigation, but there is no one to take his place. He will have to continue. Soon though, they have a suspect. He is Donnie Fraser, a drifter from Northern Ireland. South is disturbed by this because Fraser is very familiar to him. He and his mother left Belfast after his father was murdered. He was still just a child at the time. But now he recognizes that Donnie Fraser is the man who was convicted and sent to prison for murdering his father and he suspects that the man had come to Kent looking for him. He'll never know for sure because soon they have another murder to investigate. Donnie Fraser's. At first, it looks like Fraser's death might have been suicide, but, no, it was murder.
Now William South is in the deep end of a place he didn't want to be - the investigation of a double murder. This, however, is exactly where DS Cupidi wants to be. She is hard-driving, intelligent, ambitious, and wants to make a name for herself in her new assignment. She sees the chance to solve two murders as a golden opportunity for her career. At the same time, she is sensitive to her partner's connection to the case and careful to ensure that his personal relationships are not affecting the investigation.
The best times for South are when he can get away from all this and find himself outdoors with the birds. Those were also my favorite parts of this book as the birds he is seeing are described. I'm not familiar with the birds of Kent, so I can't say if the species listed are accurate, but they sounded plausible to me. A birding detective is certainly an interesting literary creation. The two activities are not that dissimilar after all. Both require patience and an ability to notice details.
I've never read books by William Shaw before but this one displays a good ability at developing characters and plot. We get to know both South and Cupidi very well, and evidently, there is a continuing series featuring Cupidi. As for South, the ending of this story represents relief for him as he is able to confess and, in a sense, expiate a guilt he has carried with him since childhood. Overall, I found this to be a worthwhile read. I'm glad I finally got around to it.
My rating: 4 of 5 stars
books reading reviews William Shaw