The Reading List by Sara Nisha Adams: A review 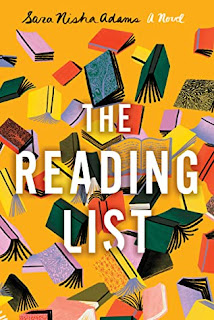 The list of the title is a series of eight well-known books. It was a list written by an unknown (until near the end of the book) hand and tucked into several different books at the struggling public library in Wembley which the lister frequented. The list read as follows:

As it happens, the people who find one of the lists need it very badly indeed. The first one who does is Aleisha, a seventeen-year-old teenager working at the library.

Aleisha is not a reader. She's only working at the library because she desperately needed a job and her beloved brother, Aidan, a book lover who had previously worked at the library, recommended it. Between shelving books and working at the front desk, she is bored senseless and spends much of her time looking at her phone. That's what she is doing the day that Mukesh comes to the library.

Mukesh is an eighty-year-old Indian immigrant from Kenya who had lived in England for most of his life. He is a widower, having lost his beloved Taina two years earlier. He is stuck in the early stages of grief still and has not been able to move on with his life. Taina was an avid reader who always had a book going. Mukesh is not a reader. He is a devoted viewer of David Attenborough documentaries. His three adult daughters have been directing and organizing his life since their mother died. Now, his oldest daughter insists that they need to clear out her mother's clothing and other things. Some things are stored under the bed and when the box is pulled out it pushes out a book that was there.

The book is The Time Traveler's Wife by Audrey Niffenegger. The library book is two years overdue. It was the last book Taina was reading when she died. Mukesh had never understood his wife's love of books, but when he finds this book and remembers seeing her reading it, he is drawn to try to find out what fascinated her. He opens the book and begins to read. He is soon completely absorbed in the story, feeling as though his wife is talking to him. He is surprised to learn that he finds great comfort in reading. When he finishes the book, he decides to return it to the library even though it is so long overdue and to ask for other books that he might read. That is how he comes to meet Aleisha.

Aleisha was having a bad day. In fact, there is very little about her life at the moment that is good. She and her brother are trying to care for their mentally ill mother at home after their father abandoned the family. It is not going well. When Mukesh, who had never been to the library, tentatively approached her at the front desk and asked for her, she was rude and abrupt and had no time for him. She pointed him in the direction of books but didn't help him. He decided on the spur of the moment that he would keep The Time Traveler's Wife. He left the library, unsatisfied, without another book to read. When Aleisha's boss learned what had happened, she was warned that she was on shaky ground and there were other people who would be glad to have her job. She must make an effort or be fired.

Meanwhile, Aleisha had found that reading list in the back of a returned copy of To Kill a Mockingbird. On a whim, she decided to read the first book on the list to see what all the shouting about reading was about. She found out. She was completely mesmerized by the story of Scout and Jem and Atticus Finch. In an effort to atone for her treatment of Mukesh, she recommended the book to him as well. When he read the book and returned it, she was eager to discuss the book with him. That was the beginning of a beautiful friendship. She recommended the next book on the list to him and the pattern of the friendship was laid.

Reading helped Mukesh to get closer to his young granddaughter, who like her grandmother was an avid reader. It also opened the world to him and helped him to finally step out of his grief. Reading aloud to her mother became a way for Aleisha to connect with her and to help her begin to emerge from her depression. Reading changed the lives of these two people. But we learn that it had a similar effect on the other people who found "the list." The books all had something of value to say to their readers.

This book is really a love letter to books, libraries, and to readers. The writer, Sara Nisha Adams, is a British Indian editorial director at a publishing house in London. This is her debut book. Adhering to the dictum of writers to write what they know, the book is steeped in British Indian culture and, of course, the love of all things bookish. There is no magic in the book, other than the magic of good writing. At one point, Aleisha's family suffers a crushing tragedy which leads her to turn against books and regret the time she spent with them, but her friend, Mukesh, gently reminds her, "Please try to remember that books aren't always an escape; sometimes books teach us things. They show us the world; they don't hide it."

Yes. What he said.