No Country for Old Men by Cormac McCarthy: A review 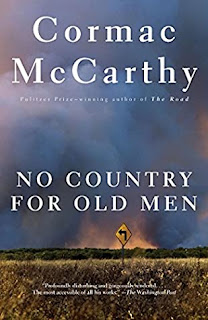 "Don't read Cormac McCarthy," they said. "He's too bloody and violent. You wouldn't like him," they said. And for years I heeded that warning. But finally, this year in thinking about ways to challenge myself with reading, I considered McCarthy again. After all, how bad could he be? How much worse than some of the other bloody stuff I've read? (I'm looking at you, Jo Nesbo.) So, I picked up No Country for Old Men and began to read. What I learned was he's not bad at all. In fact, he's very, very good. Oh, he's bloody enough all right. I quickly lost track of the body count that continued to rise throughout the book. But the violence was never particularly explicit. It was just reported rather matter of factly.

You've probably read the book or seen the popular 2007 Coen brothers movie based on the book. There was, of course, a lot of talk about the movie after it came out and especially after it won the Oscar for Best Movie, so even though I hadn't read the book or seen the movie, I was already fairly familiar with the plot. My memory of the plot may have been a bit faulty though, or maybe the emphasis of the movie was different from the book. Mostly what I had remembered was the killer Anton Chigurh and the trail of bodies he leaves behind. The book, however, featured a narrative by Sheriff Ed Tom Bell which gave a lot of exposition and moved the plot along.

The other central character was Llewelyn Moss who initially sets the plot in motion. While out hunting pronghorns, Moss stumbles on the aftermath of a drug deal that went awry, somewhere along the Mexican/American border in remote Terrell County, Texas. Moss finds everyone dead except for one badly wounded Mexican who pleads with him for water, but Moss has none to give. When he searches the vehicles, he finds a truck full of heroin. Some distance away from the other bodies, he finds a dead man with a satchel that contains $2.4 million in cash. He takes the money and goes home, but then he returns to the scene with a jug of water for the wounded man. He finds that the man has been shot and killed in the interim. He is seen by the apparent killers and they chase him across a desert valley. He manages to escape but for most of the rest of the novel, the killers are chasing him.

Returning home, Moss sends his wife, Carla Jean, to her grandmother in Odessa, hoping to keep her safe, while he takes the money and runs.

Sheriff Bell investigates the drug deal gone bad and the resultant deaths. Learning of Llewelyn's involvement, he attempts to protect him and his wife. They are residents of his county and he feels responsible for them. But his attempt to keep them safe is complicated by the arrival of ruthless hitman Anton Chigurh on the scene. He has been hired to find and return the money. He will go to any lengths to accomplish the task he has been hired for and will kill anyone who stands in his way. The reader intuits pretty quickly that this will not end well for Llewelyn Moss.

This book was published in 2005. The story was originally written as a screenplay. I looked at some of the reviews of the novel that appeared at the time of its publication and saw that some of the professional critics who did not like it, and there were a few, complained about the book being "too cinematic." Huh? Is that really a bad thing? Not being a professional critic, maybe I'm just not sophisticated enough to see the problem with that. I loved McCarthy's vivid exploration of the darker side of human nature, not only in Anton Chigurh but in Sheriff Bell as well. Bell is haunted by his actions in World War II. (This book takes place in 1980 when he is in his 50s.) He received a Bronze Star for action in which he feels that he failed his unit and left them to die. He has spent the rest of his life trying to make up for that failure.  I particularly enjoyed Bell's narrative in the book and felt that it was both the glue that held the plot together and the engine that moved it along.

Llewelyn's actions, too, have their dark side. He could have turned the money in. He didn't have to run with it and focus the attention of a professional killer on himself and his wife, putting her as well as himself in mortal danger. And, of course, Chigurh is darkness itself. He is essentially a psychopathic killer who takes a lot of pleasure in his work.

McCarthy is an extremely gifted writer and I enjoyed this book quite a lot. Several of the critics that I read said that it is inferior to his other work. Now I need to read some of that other work and make my own judgment.