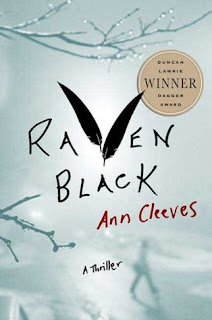 I had seen the "Shetland" series on television but had never read any of the books, even though I am a big fan of Ann Cleeves' writing. So I decided to remedy that starting with the first book in the series. It was a creditable beginning.

Raven Black takes place in the fictional town of Ravenswick, Shetland, where on New Year's Eve a simpleton loner named Magnus Tait is visited by two teenage girls, Sally Henry and Catherine Ross. When the girls turn up at his door, he invites them in to toast the New Year. The girls then leave but they, especially Catherine, have left a vivid impression on Magnus. A few days later when he's riding a bus, Catherine gets on. When they both start to leave the bus, Catherine offers him her hand to help him down and he invites her in for a cup of tea.

A deep layer of snow covers Ravenswick but the next morning a local artist on her way home sees some bright colors in the distance on the snow and ravens circling around the area. She goes to investigate and discovers Catherine Ross's strangled body which the ravens have already been feeding on. The body is quite near Magnus Tait's home. The police come to investigate, led by Inspector Jimmy Perez.

Perez is another strong and realistic detective creation of Cleeves. His name comes from a Spaniard who had been shipwrecked on Fair Isle and subsequently made it his home. It was there that Perez was born and raised. He went to school at Ravenswick and Lerwick on the main island, so he is very familiar with the area. Soon, a high-powered team of detectives from Inverness is sent in to head up the investigation and Perez is relegated to a relatively minor role. But he establishes a good working relationship with the head of the new team and they begin working well together to try to solve the crime.

The community is sure that they know who killed the girl. Several years earlier, a young girl went missing in Ravenswick and she was never found. The neighbors were sure that Magnus Tait was responsible. Now they have jumped to the conclusion that he is responsible for this death also. The investigators are interested in him but can find no physical evidence linking him to the crime and Perez follows the evidence. Moreover, he finds himself feeling sympathetic toward the lonely man who is an outcast in his community. It soon develops that there are other potential suspects in the murder.

Then a complication arises. While out walking, Fran Hunter, the woman who had found Catherine's body, finds another body that had been buried under some rocks. It is the girl who had gone missing years earlier, Catriona Bruce. This body also was found in the vicinity of Magnus Tait's home. Now Perez must determine whether the two deaths are connected and if indeed Tate is responsible for two murders.

I found that I liked this book much better than the television series. I sometimes found the series perhaps unnecessarily complicated with story lines that were difficult to follow. It's much easier for me when I see it all in print.

One of the strongest parts of the narrative, in my opinion, is Cleeves' evocation of this small, close-knit Shetland community. Everyone knows everyone else and many of the people are related in one way or another. One can feel the claustrophobic context of those relationships.

It's not just the community relations that are a strong element; Cleeves also gives us a powerful picture of the unique Shetland culture, for example their upcoming celebration of a holiday called Up Helly Aa. It is a festival that marks the end of the Yule season and involves a torchlit parade of costumed participants that ends in the burning of an imitation Viking galley. We are given to understand that this is an important holiday for them and there is much discussion of it througout the book. The Viking influence and heritage is strong on the island.

As usual, Cleeves hid the solution to the mystery(ies) of the two deaths very well indeed. I admit I was totally flummoxed and surprised by the conclusion. And that, I suppose, is the mark of an excellent writer of thrillers, a description that fits Cleeves to a T.