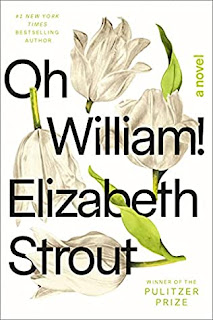 Having read and loved Elizabeth Strout's two previous books featuring Lucy Barton, I was excited to hear about this third Lucy book. I pounced on it as soon as it was available and read it right away. It did not disappoint. In fact, it may be my favorite of the three.
The William of the title is Lucy's first husband with whom she had two daughters. William was serially unfaithful in the marriage and finally, Lucy took her two daughters and left him. This was especially traumatic for the daughters who loved their father, but they survived, and eventually, Lucy married again to a man who was just what they needed. He provided stability and love and he and Lucy had a very happy marriage. Sadly, he had recently died at the time that this story begins.
Meanwhile, William also remarried a couple of times and he and his third wife had a daughter. Then his history repeated itself. His wife took their daughter and left him.
One of Lucy and William's daughters had given her father a membership in one of the DNA matching organizations that identify one's relatives and ancestors. Through it, he had learned that he had a half-sister that he never knew about. She lived in Maine. At loose ends after his wife and daughter left, he decided to go to Maine to meet his sister. But he didn't want to go alone. He and Lucy had always maintained an amicable relationship and he asked her to go with him. Most of the narrative details their trip.
Loneliness and grief are the overriding themes of that narrative and it is richly mesmerizing. Lucy is the narrator of the story. She is now a very famous writer and she says the only way she can tell the story is as a novel/memoir. She tells us a lot about her life with William and weaves it into her history with her second husband. We learn that her current relationship with William is deep and complicated, based upon their history together and the two daughters they share. Her portraits of those daughters, too, are vibrantly drawn. We hear less about William's third wife, Estelle, and their daughter but all of these people, including Lucy's recently dead husband, serve as a palpable background for the ebbs and flows of the Lucy/William relationship at center stage.
The intimacy and fragility of close human relationships are the continuing themes of the narrative and it makes for breathtaking reading. But even in the most intimate relationships the possibility of being completely open and honest is problematic. As Lucy says near the end of the book, "People are lonely, is my point here. Many people can't say to those they know well what it is they feel they might want to say." In this book, though, the amazing Elizabeth Strout accomplishes that.
My rating: 5 of 5 stars
books Elizabeth Strout reading reviews