Wayward by Dana Spiotta: A review 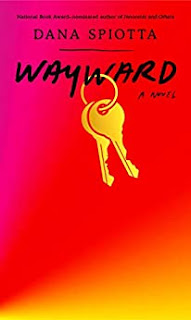 "It was wrecked. It was hers." So thinks Sam Raymond about the derelict old house with good bones in a poor neighborhood in her hometown of Syracuse that she has bought on a whim. She might also think that about herself - her body and her life. She is fifty-two years old and beginning to experience the effects of the mid-life climacteric; the sleepless nights; the unexpected and embarrassing hot flashes; the sudden realization that she has become invisible to much of the population, that they no longer "see" her. This is making her question everything about her life.
Sam's life has been a comfortable one as a suburban housewife married to a successful if dull lawyer. They have a sexually active teenage daughter who is becoming distant and uncommunicative. Sam works part-time as a guide at one of the local tourist attractions. She has just learned that her mother is terminally ill. In the long wakeful hours of the night, as she contemplates her life as a daughter, wife, and mother and her new sense of mortality, she realizes that the life she has is no longer fulfilling and she decides to change it.
The events of this book take place after the 2016 election and the state of an unraveling nation also contributes to Sam's mid-life reckoning. She is appalled at the prevalence of misogyny that the election exposed. Her oblivious husband tells her she shouldn't take it personally.
When Sam first sets eyes on that run-down house in the run-down neighborhood, she has an epiphany. This is what she's been looking for. She will buy the house and restore it and by restoring it perhaps restore her life. She's in the fortunate position of being able to manage that financially and so that is what she does; she buys the house, leaves her family home, and moves into it to work at the restoration.
But this is not the only change that Sam makes to her life. She seeks community with other women in her position and looks for ways to resist what she sees happening to her country. She makes new friends, some of whom she meets through a Facebook group called "Hardcore Hags, Harridans and Harpies." (I want to join that group!) She tries to become a part of her new neighborhood and the diversity of people who live there. She has stumbles and encounters problems and setbacks but as she makes progress on the house, she feels that she is making progress on her life.
If I'm making all of this sound a bit morbid and maudlin, be assured it really isn't. It is a funny - sometimes laugh-out-loud funny - story of one woman's transition through this unavoidable phase of a woman's long life. I found it thoroughly engrossing, perhaps because I identified completely with Sam. (Been there, done that. Didn't buy the wreck of a house to restore but did do other things to change aspects of my life, including starting a blog.) Dana Spiotta's writing is sharp and moving, as when she describes Sam's remembered pleasure at holding her daughter as a baby and her longing for that now as her daughter becomes more distant from her. Her ability to invoke and fully describe such feelings is an unadulterated pleasure to read.
It's a lot to cover: the life of a wife, mother, and daughter in middle age and her disenchantment with the consequences of choices made; disenchantment with life, in general, made more intense by political, social, and cultural issues. But ultimately what Dana Spiotta's book serves to remind us is that there can be beauty in ruins.
My rating: 5 of 5 stars
books Dana Spiotta reading reviews