Intimacies by Katie Kitamura: A review 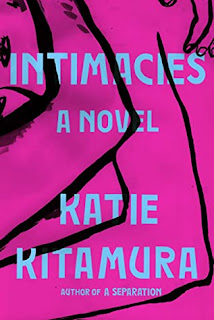 Katie Kitamura's new novel is definitely not plot-driven. It could be argued that nothing much happens in it, although that's only on the surface; underneath there is a lot going on. The story is character-driven, presented to us in the first person by an unnamed narrator. She is a narrator who is in some ways unreliable, not because she lies to us but because she only has access to fragments of the reality around her. We struggle along with her to interpret people and happenings and understand how they relate to her.
Although we don't know the narrator's name, we know quite a bit about her. We know that she is fairly young and single. She has recently come to The Hague in the Netherlands fleeing New York after the death of her father there. She is an experienced global traveler. Her mother lives in Singapore. Her passport is well-stamped with various destinations and she speaks several languages, but where is she actually from? Where is home? It's a question that is never really answered but she tells us that she has spent long stretches of her life in several different European cities and she finds that The Hague bears a "family resemblance" to them.
The narrator has come to The Hague to work as an interpreter at one of the international courts there. In her position, she often interprets for people who have been accused of heinous crimes. To do this, she finds she must get inside people's heads and translate not just their words but their tone. And to accomplish that, it is necessary to find within herself a source of empathy for the person she's interpreting, even those who are notorious criminals. Her superiors find her to be very good at her job.
Outside of work, she starts up a relationship with a man who is separated from his wife but still married. His wife and teenage children now live in Lisbon. As his affair with the narrator intensifies, he tells her that he is going to Lisbon to ask his wife to end their marriage and that he will be gone for a couple of weeks. He invites her to move into his more spacious apartment and stay while he is gone. She does so, anticipating that their relationship will move to a new level. He goes to Lisbon and after a few cryptic texts, he essentially disappears. Two weeks go by, three weeks go by and his absence and silence continue. After several weeks, she decides to move back to her own apartment.
Meanwhile, back at work, she has been assigned to interpret for a former West African president on trial for genocide, euphemistically referred to as ethnic cleansing, in his country. As she accepts this assignment, she meditates on the fact that most of the defendants before the court tend to be Black. The court primarily investigates crimes and arrests the accused in African countries, even though crimes against humanity are occurring right around the world. She is surprised to find that the former president is a very charismatic man and that he likes her. She finds a perverse sense of pleasure in his approval even as she is appalled by the acts of which he is accused.
This story makes clear that the translator's job is one of intimacy with the person for whom she or he is translating and intimacies of various kinds are a theme throughout this book. One usually thinks of the word in the context of sexual intimacy but that really isn't what is meant here; rather, it is that sense of getting inside another person's head, understanding what they are thinking in order to interpret their words and tones. It's all about understanding language, body language as well as words. Only with such intimacy can one accurately interpret the individual's entire persona.
When I turned the last page on this book, I gave it four stars in my mind but that was eleven days ago and I've had plenty of time to reconsider. This is an absorbing and taut novel that is hard to put down. It explores a world that I have little knowledge of and yet it delivered an intimate exposition, one might say translation, of that world that gave me a clearer understanding of it and how it works. Like the narrator of the novel, perhaps I see only fragments of reality and don't have access to the entire context, but what I see allows me to better interpret events. That's quite a remarkable achievement by this author and is worthy of five stars.
My rating: 5 of 5 stars
books Katie Kitmura reading reviews