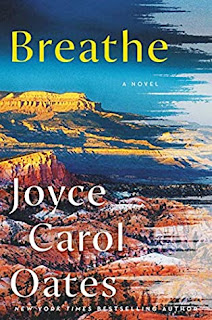 It's been years since I read a Joyce Carol Oates book. I'm not sure why really. Maybe I was intimidated by the last one I read. She can be an intimidating writer. But when I read about her newest one, I was intrigued and knew I had to read it. Breathe is about grief and about how it can disorient a person and upend their life.
Forty-eight-year-old Gerard McManus and his second wife 37-year-old Michaela have come to New Mexico to the Santa Tierra Institute for Advanced Research from their home in Cambridge, Massachusetts where Gerard had been a professor of the history of science at Harvard. He was invited to spend an eight-month residency at the Santa Tierra Institute and his wife found employment teaching a weekly memoir workshop at the University of New Mexico. It was to be an adventure for them, but it was an adventure that quickly went wrong when Gerard became ill. At first, it was thought to be nothing too serious but that diagnosis quickly changed and by the time we meet him at the Santa Tierra Cancer Center, he is already on his way out. Soon he is transferred to hospice care and Michaela's vigil begins.
The book is divided into two parts, "The Vigil" and "Post-Mortem." Gerard is the dominant presence in each of them as Michaela sees her own life as inconsequential in comparison to her husband's. After her husband's death and cremation, a representative of the institute suggests to her that she should go home to Cambridge but she refuses. She can't bring herself to leave the place where Gerard was last present. She feels him everywhere and she begins to see him everywhere.
Perhaps it isn't unusual for a grieving spouse to continue to feel her partner's presence but soon Michaela's distress leads to outright hallucinations. She imagines that she had tried to give bone marrow to save Gerard's life but the procedure was botched and she ends up paralyzed. She gets a voice mail message saying that it was all a terrible mistake; her husband hasn't really died even though at this point his body has already been cremated. She looks for him everywhere and frequently catches glimpses of him in a crowd. Meanwhile, she herself seems to be disappearing. When she looks in the mirror, parts of her face are missing and a section of her left arm begins to fade.
And what about Michaela in her grief? Does she have no friends or relatives who can comfort her? Clearly not. We learned at the beginning of the book that her parents had been dead for decades, although later on, it appears that they may not be dead at all, merely out of touch. Perhaps that is the same thing as far as Michaela is concerned. Apparently, she has no siblings or if she does, they are out of touch also. Gerard, though, did have adult children from his previous marriage and did not want them informed so that they could visit him as he lay dying. Michaela acceded to his wishes and even after his death, she delays in informing them. Obviously, this was not a close-knit, supportive family.
Anyone who has ever lost someone they love can empathize with Michaela's situation up to a point. I reached my point about two-thirds of the way through the novel and then I began to lose patience with her. Everyone grieves differently obviously, but most people in the real world have to learn to deal with that and get on with their lives. Michaela, for whatever reason, is incapable of that. She is disoriented in regard to time. Her days pass with excruciating slowness, but at the same time, everything seems to happen very quickly. Her grief controls every aspect of her life. At some point, she begins to feel that Gerard is not the one who died; rather, she is.
Oates' meditation on grief reveals hidden meanings that will probably appear different to each reader based on their own experience of grief. It is an emotionally complicated novel about a woman who has lost her anchor in the real world and now exists only as a shadow in her new hallucinatory existence. Strong stuff. Typical of Oates.
My rating: 4 of 5 stars
books Joyce Carol Oates reading reviews