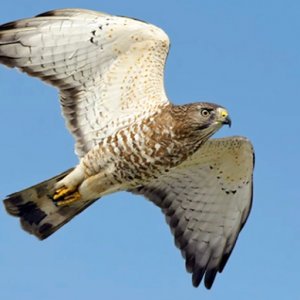 The American Bird Conservancy's Bird of the Week is the Broad-winged Hawk. This is a hawk of the eastern forests. It is about the size of a crow. It is the smallest of the Buteo genus on this continent. If you are looking up during migration season, you might be fortunate enough to witness a "kettle" of Broad-wings. These are large groups of the migrating hawks that can number from a few dozen to several thousand.
*~*~*~*
It is the middle of the migration season and birds are dying by the thousands when they crash into lighted high-rise buildings at night. This week a volunteer with the New York City Audubon found more than three hundred bird carcasses littering sidewalks outside the World Trade Center.
*~*~*~*
Sequoia National Park in California has been closed and evacuations ordered because of the threat posed by the KNP Complex fire. As of Wednesday, the fire had scorched more than 7,000 acres.
*~*~*~*
In an attempt to protect the ancient sequoias of the park, some of the oldest and largest trees in the world, firefighters are swathing their trunks in protective foil. Those being wrapped include the largest of the trees, the one called General Sherman.
*~*~*~*
A new study has found that the production of meat worldwide causes twice the pollution of plant-based food. The production of meat accounts for almost 60% of greenhouse gases from food production.
*~*~*~*
A traditional hunt of dolphins in the remote Faroe Islands has sparked outrage as nearly 1500 of the animals were killed in one day. Conservationists estimate that this was the largest single-day hunt in history. It was definitely the largest ever in Faroe Islands history.
*~*~*~*
The future survival of Florida's manatees is far from certain. This has been the deadliest year on record for the species and scientists and conservationists are scrambling to prevent further disaster.
*~*~*~*
A global study has found that smoke from wildfires is killing people in cities far from the source of the smoke. According to the findings, it causes more than 33,000 deaths per year in 43 countries.
*~*~*~*
In an exceptional event possibly brought on by global warming, nine loggerhead sea turtle babies have hatched in the most northern spot ever recorded. They came from a clutch of 82 eggs that were laid on a beach on the northern Adriatic coast.
*~*~*~*
American parks are being incredibly overcrowded by visitors and all that human presence is reshaping and changing the parks themselves. Park officials say it is not sustainable.
*~*~*~*
Some states are implementing a new strategy in attacking the problem of plastics in the environment: They are making corporations pay.
*~*~*~*
What would the world be like without hummingbirds? Let's hope we never find out, but many species of the little birds are in serious trouble and danger of extinction.
*~*~*~*
The glaciers on Mt. Shasta in California are melting and now the mountain is nearly snowless which is further contributing to the melt. It began losing a lot of its snow cover in midsummer this year which is unusual. It generally comes later in the year.
*~*~*~*
Wetlands, depending on their placement, can help remove nutrient pollution that causes low oxygen dead zones in the sea. Just in case we needed another reason to protect wetlands.
*~*~*~*
Killings of environmental advocates around the world reached a new high in 2020. Most of those killed were indigenous people or small-scale farmers defending their forests against extractive industries.
*~*~*~*
California's wild chinook salmon population is at grave risk, threatened by a combination of the effects of drought and human impediments.
*~*~*~*
Squirrels can be bold, athletic, aggressive, and sociable. In other words, they have a lot in common with humans, at least that is the finding of animal researchers at the University of California, Davis. Their study was published in this month's issue of "Animal Behavior."
*~*~*~*
Scientists have studied the Chicxulub event for more than 40 years. The space rock that slammed into Earth there 66 million years ago terminated the age of dinosaurs and paved the way for a bountiful new world for mammals. But it did much more than that scientists say; it completely modified the geologic and biologic evolution of the planet.
*~*~*~*
Do species awareness days actually serve the purpose of helping the animals that are so designated? Research is finding that there are ways to make such days more effective.
*~*~*~*
A conservation program in Seattle is working to restore the pinto abalone, a native species that is in danger of extinction in the Salish Sea.
*~*~*~*
Harvard University announced this week that it would be ending all of its investments in fossil fuels. This represents a landmark victory for climate activists who have long lobbied major colleges and universities to do just that.
*~*~*~*
Margaret Renkl mourns the lack of butterflies in her garden this year but finds other things in Nature that make her particularly happy just now. One is the migration of birds.
weekly roundup