The Long Call by Ann Cleeves: A review 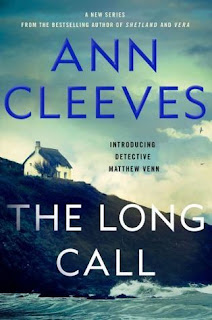 Ann Cleeves is an old pro at writing British mystery series. She has several to her credit already, including probably her most famous two, the Vera Stanhope series and the Shetland series, both of which were adapted for television. But now she has a new one. This is the first in that series featuring Detective Inspector Matthew Venn. It was published in 2019. The books are set in North Devon at the confluence of two rivers, the Taw and the Torridge, thus the "Two Rivers" series.
We meet the protagonist, Matthew Venn, as he stands outside the church where his father's funeral is being conducted. Venn has long been estranged from his parents and he was not welcome at the funeral. The source of his estrangement is revealed to have been his rejection, in early adulthood, of the strict religious community called the Brethren. His parents were devoted to this group, essentially a cult, and had raised Matthew within the stern confines of its philosophy. But once he was old enough to think for himself he rejected it all completely and publicly, leading to an irrevocable break with his parents. Still, even though he no longer practices the religion, he continues to be influenced by its strict moral code.
As Matthew is leaving his post by the church, he receives a phone call informing him that a body has been found on the beach. As it happens the area where the body was found is quite near the house that Matthew shares with his husband, Jonathan. It is clear that the body, a man, was the victim of murder and when he is identified, we learn that he had a connection to the Woodyard, a community center that provides a place to work for artists as well as cultural and art lessons for the public. It also serves as a managed care facility for people who are unable to fully function on their own. The director of the center is Jonathan, which puts Matthew in a bit of an awkward position when it's learned that the dead man had worked in the kitchen there. But with Jonathan's encouragement, he decides to soldier on and work the case in spite of the possible conflict of interest.
Venn's sergeant is D.S. Jen Rafferty, a beautiful redhead originally from Liverpool. She still misses her hometown but she left because she was in an abusive marriage and after the divorce, she wanted a fresh start in a new location for herself and her two teenage children. Matthew considers her the best detective he's ever worked with. The other main member of his team is the brash young Ross May. He's not long on experience or people skills but he is the DCI's golden boy and Matthew is stuck with him.
As they get into the investigation, they learn that the murdered man had apparently befriended a young woman named Lucy who has Down Syndrome and who was served by the center. He rode the bus with her as she went home from the center each day and he sometimes gave her candy. The woman lives with her father, Maurice. When she sees a picture of the murdered man on television, she reacts strongly and her father informs the police that she knew him. Soon after, another young woman with Down Syndrome who went to the center is kidnapped. The woman is later found unharmed but dehydrated. She is unable to provide very much information about what happened to her. But then Lucy is kidnapped. What is going on here? And are the kidnappings related to the murder?
Cleeves gives us this story through revolving points of view from Venn, Jen Rafferty, and Maurice. The various points of view aid in developing the plot and interweaving discoveries made by the investigators. Through each of these points of view, we also learn a lot about the backstories of the characters and about the setting in beautiful North Devon. It is an engaging story and Cleeves performs her usual character development as a means of building the plot. This one develops rather slowly. After all, it is the first in a planned series so she takes care to thoroughly introduce us to the main characters. The story has some painful moments but it ends on a more hopeful and upbeat note and leaves us looking forward to the next entry in the series.
My rating: 4 of 5 stars
Ann Cleeves books reading reviews