The Madness of Crowds by Louise Penny: A review 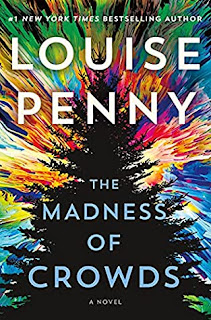 Louise Penny's latest mystery set in the little Quebec village of Three Pines takes place at a time in the future when the present pandemic has been officially declared over. Things are beginning to get back to normal, but the effects of the pandemic and its consequences are still very much on the minds of the residents.
All of those Three Pines residents that we have come to know over the course of this series, characters who feel like our friends that we enjoy spending time with, are present and accounted for and Inspector Gamache is still on the job.
Gamache is marked by a horrendous experience he had during the pandemic. He was called to a nursing home where he discovered that the inmates had been abandoned. They were dead or dying. He feels shame, not that he himself had abandoned these people but that his society had abandoned them and that, as a senior police officer, he had not realized earlier that something like that could happen.
Now it is late December and the holiday season is in full swing. At the height of it all, Gamache is called upon to provide security for a speaking event at a nearby college. When he learns who the speaker is, he is appalled.
The speaker will be Abigail Robinson, a controversial statistician who has been hired by the Canadian government to analyze the country's pandemic-related data. Her conclusion is that the sick and elderly used too many of the country's resources during the pandemic. They were going to die soon anyway but caring for them put a strain on the country's finances, medical supplies, and personnel. She proselytizes for a kind of eugenics and for rationing care for those who are least able to benefit from it. Disgusted by her conclusions and proposed solutions, Gamache asks the college chancellor to consider canceling the event. For his efforts, he is accused of stifling free speech.
The speech goes on and predictable chaos ensues and in the midst of it all, someone tries to shoot Robinson. Gamache pushes her down and the shot misses, but it is a near thing. However, soon after, Robinson's manager who is her close friend is killed while walking on a trail at night during a snowstorm. Could this have been a case of mistaken identity? Did the killer mistake her for Robinson? Gamache must answer those questions and determine a motive for the killing in order to figure out who did it.
Louise Penny's mysteries have always been firmly rooted in the social fabric and in the love of family and friends but she has never shied away from addressing difficult issues. The Madness of Crowds continues that tradition. She remarks upon the fact that crowds of people can lose social inhibitions and act with a disregard for law and norms of behavior. They can even perpetrate cruelty that they would not normally consider. They can, in fact, succumb to a form of insanity or madness.
Gamache is concerned that if Robinson continues spreading her ideas that such madness may overtake his own society. This is very personal for him because his youngest grandchild, his daughter's baby has Down Syndrome. She would be one of those vulnerable people who Robinson believes it is a waste to spend resources on.
This is the darkest Penny mystery that I can recall, but as always, it is lightened by the beauty of Three Pines and all its quirky but lovable residents. It's always a pleasure to visit them again.
My rating: 4 of 5 stars
books Louise Penny reading reviews