The American Bird Conservancy's Bird of the Week is the Great-crested Flycatcher. This is a bird of the upper forest canopy, a cavity-nester whose persistent calls ring out throughout the summer around here before it returns to its winter home in southern Mexico, Central America, and Colombia.
*~*~*~*
After the passage of Hurricane Ida, a Shell refinery in Louisiana has been spewing into the air black smoke from toxic chemicals it is trying to burn off. The storm disabled air quality tracking systems in the area, making the potential harm to public health difficult to gauge.
*~*~*~*
The Biden administration announced this week that they would open tens of millions of acres in the Gulf of Mexico for oil and gas exploration as a result of a court order. However, Earthjustice, a non-profit public interest organization, has now filed suit on behalf of four environmental groups to challenge the move. Their contention is that the environmental analysis behind the auction is flawed and violated federal law.
*~*~*~*
On Wednesday, the administration announced a blueprint for having nearly half of the nation's electricity produced by solar power by mid-century. It is part of an ambitious plan to address climate change.
*~*~*~*
A new analysis by the Washington Post of federal disaster declarations reveals that nearly one in three Americans live in a county that has been hit by a weather disaster in the last three months.
*~*~*~* 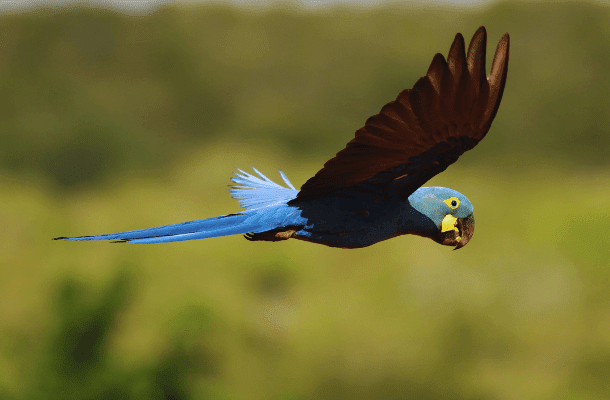 This is the Lear's Macaw, a beautiful Brazilian bird once on the brink of extinction that has been brought back thanks to decades of efforts by Brazilian conservation groups. But now the bird is being threatened again by the development of a wind energy facility in its habitat. The plans have proceeded despite requests of international and local conservation groups to move the project.
*~*~*~*
More than 200 top medical journals are warning that climate change is the greatest threat to global public health and they urge world leaders to take effective action to cut heat-trapping emissions.
*~*~*~*
As residents were forced to evacuate around Lake Tahoe because of the Caldor wildfire local bears moved into the area, digging through trash cans and breaking into houses in search of food.
*~*~*~*
After the devastation of the summer's weather events throughout the country, some lawmakers are hoping that this will improve the possibility of actually taking effective action to combat climate change.
*~*~*~*
When you think of the Thames River, if you think of it at all, you probably do not imagine it with seals living on it, but in fact, since the river has been cleaned up a recent survey revealed 574 harbor seals and 685 gray seals living in the area.
*~*~*~*
The world congress of the International Union for the Conservation of Nature meeting in Marseille has adopted a motion calling for the ban of deep-sea mining. Scientists argued that the consequences for the ocean's ecosystem are unknown if deep-sea mining is permitted.
*~*~*~*
Conservation groups are calling for additional protection for the endangered Greater Sage-Grouse and its habitat. They contend that the Bureau of Land Management's plans for withdrawing certain areas of that habitat from damaging mining are insufficient.
*~*~*~*
The warming climate in Britain has attracted a boom in the population of dragonflies and damselflies. At least six new species have colonized the country in the last twenty-five years.
*~*~*~*
Research has found that animals are "shapeshifting" in response to climate change. They are changing their physiology to adapt to a hotter climate, getting larger beaks, legs, and ears in order to better regulate body temperature.
*~*~*~*
The Kea, a New Zealand parrot, is considered to be one of the most intelligent species of birds. A disabled parrot named Bruce is further evidence of that. Bruce is missing the top part of his beak but he has learned how to use pebbles in lieu of a beak in order to preen himself.
*~*~*~*
The activities of a low-carbon heat cooperative in Surrey have produced conditions that have encouraged a rare and declining species of butterfly, the wood white, to return to the area.
*~*~*~*
Poor air quality can be just as fatal as hurricanes, and yet we have become so accustomed to it that we no longer treat it as a crisis. Meanwhile, it gets harder to breathe.
*~*~*~*
Why do owls have such long legs? As you might expect, it is all the work of evolution to make them more effective at their jobs.
*~*~*~*
It is known that Black Vultures do sometimes attack living animals but reports of these attacks in the Mid-West seem to be increasing. Some bird experts, however, suspect the reports are overblown.
*~*~*~*
A new surveillance system that wildlife rescuers use to track trends in wildlife illness and death can also provide information to help keep humans healthy.
*~*~*~*
A Great Blue Heron in New York has gained hero status there after he was photographed swallowing a New York nemesis, a large rat.
*~*~*~*
One of my favorite memories from childhood is late summer afternoon as dusk came and the fireflies came out. All around me, the growing darkness twinkled with their lights. I don't see many fireflies these days but in the Great Smoky Mountains, not so far from where I grew up, they are something of a tourist attraction.
*~*~*~* 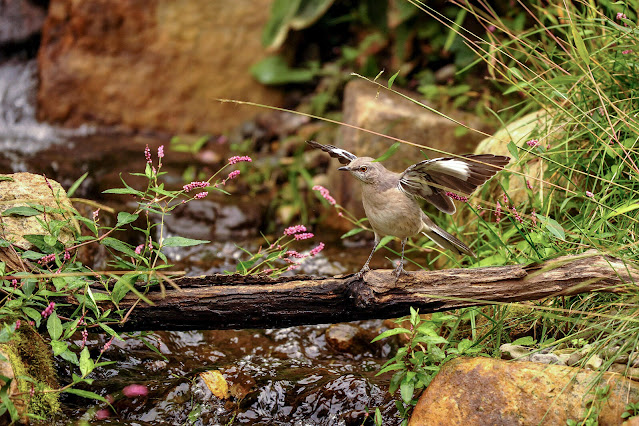 Finally, Audubon has ten fun facts about one of our favorite backyard birds, the Northern Mockingbird.