A Slow Fire Burning by Paula Hawkins: A review 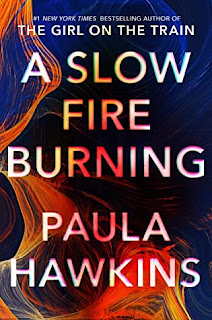 Paula Hawkins had a best seller with her 2015 thriller The Girl on the Train. That book featured a damaged female protagonist. Perhaps on the theory that more is better, her new thriller features not one but three damaged female protagonists. And all of them are suspects in a murder.
The murder victim is one Daniel Sutherland whose body is found on his scuzzy houseboat moored on Regent's Canal in London. He had been stabbed and blood is everywhere including on a set of keys lying near the body. His neighbor from the next houseboat over finds the body when she notices his door open when she is out. For whatever reason, she picks up the keys and takes them with her.
That neighbor is named Miriam and as the discoverer of the body, she is immediately on the police's radar as a potential murderer. As we get to know Miriam, we find that she actually had a tenuous connection to the family of the murdered young man but it is not a happy connection. She is full of resentment and a desire for revenge over a wrong that was done to her, one that has blighted her life. Miriam had written a book and she asked a local author to read it. Well, he read it all right, but he appropriated the plot for his own work which became a best seller. (For some reason, the purloined plot seems to be a very popular plot device for writers this year.) That local author was the murder victim's uncle by marriage.
His aunt is Carla who is our second damaged protagonist. She, too, is full of resentment and anger. Years earlier she had suffered a heart-rending family tragedy, one from which she has never been able to recover and which continues to haunt her every day. She and her husband, the author, are no longer together, and a few weeks earlier her sister, Daniel's mother, accidentally(?) fell down a flight of stairs and broke her neck. She died instantly. And now, Daniel. Eventually, we learn that Daniel and his mother were at the center of the tragedy that Carla endured. Has she had her revenge?
Finally, we have Laura Kilbride, a young woman with whom Daniel had a one-night stand. It was her keys that were found by his body, but, of course, the police don't know that because Miriam didn't turn them over. When Laura was a child, she suffered a terrible accident that has left her damaged both physically and psychologically. These problems reveal themselves through a serious limp and her aggressive outbursts, short-term memory lapses, poor impulse control, and inappropriate social behavior. She feels low (or no) self-worth. Truly, she is one messed-up young woman.
In spite of the tragedies that have damaged their lives, it is somehow difficult to work up much empathy for any of these women. They are all essentially self-serving and narcissistic. Hawkins' narrative leads the reader to suspect one of the flawed characters before taking us in a completely different direction that seems to lead to one of the others and I admit I did not really anticipate the plot twist that she had devised for us at the end. The message of that ending seems to be that trauma can unravel a person's life if it isn't confronted and allowed to heal. And the damage from it can finally manifest itself in strange ways. Such as murder.
My rating: 4 of 5 stars
books Paula Hawkins reading reviews