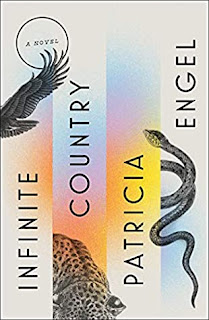 This novel details the lives of a mixed-status, documented and undocumented, family of Colombian immigrants to this country as they struggle to survive and to elude the notice of the authorities. Mauro and Elena, with their baby daughter Karina, were led to emigrate in the first place by Colombia's long history of violence and the lack of economic opportunity there. They sought a better life for themselves and their daughter in the North. They gain tourist visas and arrive in Houston where they find jobs and send money back to Elena's mother in Bogota. When their tourist visas are close to their expiration date, they must make a decision whether to return to Colombia or overstay the visas. They choose to stay and thus undertake the precarious position of undocumented immigrants.
Their son, Nando, is born an American citizen. The family moves often to avoid detection by the authorities. A third child, another daughter named Talia, is born. And then their luck runs out. Mauro is arrested after an altercation and turned over to the Immigration and Naturalization Service. He is deported back to Colombia, leaving Elena with three small children to care for alone. She makes the gut-wrenching decision to send Talia to her mother in Bogota because Elena has to work and is really not able to care for a baby. Thus, Talia, an American citizen by birth, is raised in Bogota by her grandmother. Her father, meantime, has descended into alcoholism after his deportation and is not much of a presence in her life at this time, although he does visit her as often as the grandmother will permit it. It is through Talia's story that we get the narrative of twenty years of her family's history.
As a teenager, Talia gets into trouble at school which leads to her being sent to a reform school. Her mother had bought her a plane ticket to return to the United States to her mother and siblings. Determined not to miss that upcoming flight, Talia escapes from the school and begins to make her way back to Bogota. She depends upon the kindness of strangers to get her there and her faith in strangers is rewarded. She is delivered back to the city to her father's apartment (her grandmother is long dead by this point) and he hides her until it is time for her flight. Talia is terrified that she will be discovered and stopped when she goes to the airport to take her flight, but she knows she must go. She makes it safely to the plane but is not able to relax and breathe easily until the plane is actually in the air.
In telling the story of this family, Patricia Engel who is herself a child of Colombian parents weaves in a lot of the history and folklore of the Andean region. The best parts of her novel for me were those sections that were descriptive of the landscapes and mythology of the region. She also manages to powerfully convey the fraught atmosphere experienced by Elena and Mauro in America as they try to keep their family safe and at the same time remain under the radar so that their undocumented status is not detected. This is increased a hundredfold once Mauro is deported and Elena must try to make it on her own. The tension of their lives is almost unbearable and the knowledge that this is the reality of many immigrants to our country is itself an indictment of our entire immigration system.
This is the first and only novel that I can recall having read that eloquently tells the story of undocumented people in this country. I have known such people and have empathized with them but have truly never completely understood the peril of their lives or the emotional strain under which they live. I'm sure I still don't understand it fully but Patricia Engel has given us all a much closer look into those lives and for that, she is to be commended.
My rating: 4 of 5 stars
books Patricia Engel reading reviews