The Golden-winged Warbler is American Bird Conservancy's Bird of the Week. This is a bird of the forests that nests primarily in the Great Lakes states. Its numbers are in serious decline and its continued survival is threatened primarily by loss of suitable habitat.
*~*~*~*
The Biden administration has launched a government-wide strategy for combatting extreme heat. The strategy includes a plan to set standards for protecting workers from the impact of rising temperatures linked to climate change.
*~*~*~*
Oil and gas companies have a well-known history of drilling wells and then abandoning them, leaving them for others to clean up. Congress has a plan for plugging those abandoned wells but it seems that the taxpayers may be stuck with the bill for the cleanup rather than the oil and gas companies.
*~*~*~*
Six Ojibwe tribes in Wisconsin are suing the state in federal court over its planned autumn wolf hunt. They contend that their treaty rights are being violated by the plan.
*~*~*~*
We need trees and trees need us. It is good to know that some cities acknowledge that fact and are taking steps to protect their trees.
*~*~*~*
Scientists have discovered a 220,000 square mile "seabird hotspot" southeast of Greenland where millions of marine birds spend their winters. Unfortunately, the area is also prey to winter storms that starve birds and contribute to massive die-offs.
*~*~*~* 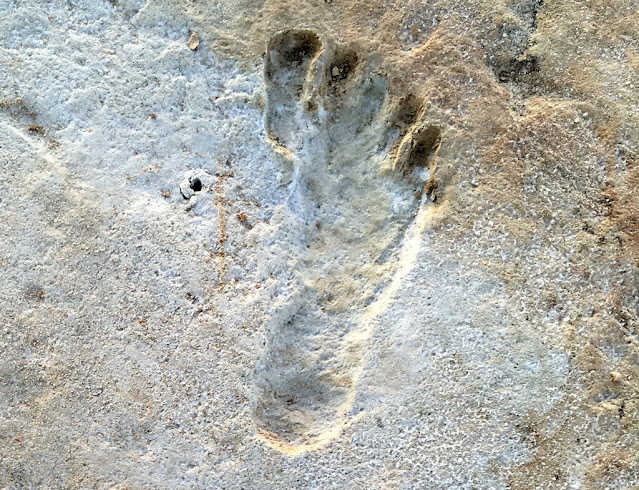 This is a fossilized human footprint, one of many found at White Sands National Park in New Mexico. The footprints have been dated to about 23,000 years ago which would have been during the Ice Age. A study of the footprints has concluded that humans must have arrived in the Americas long before the Ice Age glaciers melted which would be significantly earlier than had been previously thought.
*~*~*~*
The mysterious epidemic that was killing birds in several states in the east earlier this summer has subsided. That's the good news. The bad news is that biologists and state wildlife managers are still not clear on the causes of the epidemic so that it might be prevented from happening again.
*~*~*~*
The Sunda clouded leopard, sometimes called the "tree tiger," exists on just two islands in southeast Asia and it is declining due to loss of habitat. The cat is dependent on forests and it lives in a region that is experiencing the world's fastest deforestation.
*~*~*~*
An indigenous non-profit coalition, the Seal River Watershed Alliance, is partnering with Audubon's Boreal Conservation program to save and protect the Seal River Watershed of northern Manitoba. They have deployed ten automated sound recording units in the watershed to record bird songs in order to identify the birds that use the area.
*~*~*~*
Project FeederWatch begins soon and you can be a part of it. You don't even need a bird feeder in order to participate. The data collected and reported by citizen scientists participating in the program provide important information about the location of birds in winter and the health of the population.
*~*~*~*
In a freak occurrence, 63 endangered African Penguins have been killed by a swarm of bees. The incident happened on a beach outside of Capetown.
*~*~*~*
The new climate reality in the West seems to be drought. It affects people, of course, but it also affects birds and conservationists are working to try to make the arid West more livable for birds which would also make it more livable for people.
*~*~*~*
The invasive spotted lanternfly is a plant-eating threat to the U.S. environment and economy, but one line of defense against the pest is birds. Birds seem to find the insects quite tasty and are doing their bit to reduce the population.
*~*~*~*
The Dixie fire that swept across nearly one million acres in California is nearing its end but it has left a veritable moonscape in its wake.
*~*~*~*
The tar sands pipeline is sucking water from Minnesota watersheds and adversely affecting the lakes and the wild rice that grows in them. The Anishinaabe people who harvest the wild rice are rallying to try to stop the pipeline and save their lakes and the rice that they depend on.
*~*~*~*
The Revelator has a list of ten essential books to read about fighting climate change.
*~*~*~*
Dams on the Tittabawassee River in Michigan failed last year and that failure has led to the spread of a flood of invasive species.
*~*~*~*
The first of three periodic reports from the Intergovernmental Panel on Climate Change states that the climate is warming at an alarming and untenable rate. subsequent reports will deal with the impact and solutions to mitigate the effects of climate change.
*~*~*~*
A study suggests that the water released from dams in California that is intended to help the state's endangered salmon is actually not good at mimicking natural conditions and may not be helping the salmon that much.
*~*~*~*
You can bring more birds to your yard by planting some of the native plants that they rely on. Audubon has a database that allows you to enter your zip code and receive an email list of native plants that will do well in your area.
*~*~*~*
An unconventional but environmentally friendly weapon against future wildfires is a herd of goats. Goats will eat the brush, grass, and leaves that other grazers can't reach or will turn up their noses at. It's just the type of vegetation that fuels wildfires. The goats have the added benefit of enriching the soil with their droppings.
*~*~*~*
The Duck Stamp contest garners thousands of entries every year. Each entry is required to have a hunting theme and some subversive artists have taken that to rather hilarious extremes this year.