At Night All Blood is Black by David Diop: A review 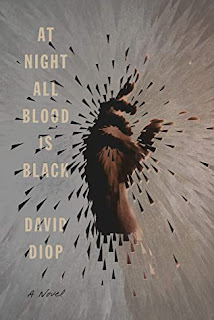 David Diop is a Senegalese-French writer whose book, At Night All Blood is Black, was published in French in 2018. It won the prestigious Prix Goncourt des Lyceens that year. It was subsequently translated into English by Anna Moschovakis and that publication has won the 2021 International Booker Prize. In spite of these honors and acclaim, I don't recall having heard of the book before former President Obama issued his yearly summer reading list. This was one of the titles on it this year. In past years, I've often picked up books that he had on his list and always found them to be worthwhile reads. I decided to give this one a try.
It is a short book, only 192 pages. I was able to read it in one day, virtually in one sitting. Its brevity proved to be a very good thing because I'm not sure how much more I could have taken. The writing is incredibly intense and the story that it tells is one of unspeakable horror and tragedy.
The gist of that story is this: The time and place are World War I in the trenches of France. Alfa Ndiaye is an African legionnaire fighting for France. Fighting alongside him is his best friend, Mademba. But then his friend is fatally wounded in battle. In fact, he is disemboweled and as he lies wounded on the field, he begs his friend Ndiaye to put an end to his suffering by slitting his throat. But Ndiaye cannot find it within himself to do that and so he stays by his friend until the end, trying to comfort him as he dies in agony. Ndiaye is filled with guilt over the incident and his spiritual burden soon unhinges his mind. His time in the trenches becomes a macabre drama. Each night he sneaks away from his comrades and captures a German soldier whom he immobilizes and disembowels and as the man screams in agony, Ndiaye slits his throat. Afterward, he chops off the man's hand as a trophy to take back to his unit.
At first, his comrades and superiors are happy with his actions. As he plays the savage, he strikes terror in their enemys' hearts. But when he continues to do this night after night, his fellow African troops begin to see him as a "devourer of souls" and they become terrified of him. By the time he returns with a seventh hand, their French captain has seen enough. The unit commander sends him to a psychiatric hospital to be treated. Slowly, under the care of a French doctor, the horror in his mind begins to recede and he approaches normal once again. He recalls his vivid memories of his mother whom he adored and who disappeared when he was a child. Now he falls in love with a young woman, but that love like the relationship he had with his mother is not to last.
The central theme of the story is a man trying to understand himself and what he owes others. What does he owe to friends and what does he owe to enemies and are those two things really the same? How does one interpret the ethical questions of life? The story turns somewhat mystical and philosophical at the end, but it is a story that, in spite of its horror, is very hard to put down. The writing is really that good.
My rating: 4 of 5 stars
books David Diop reading reviews