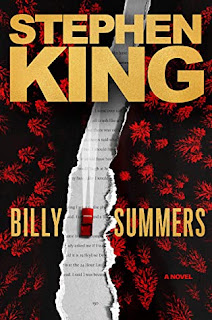 Billy Summers is a killer for hire. But he has his standards. He only kills bad men. Some of the men he has killed have been very bad indeed.
Billy was trained as a sniper in the military. When he got out, with no real prospects in view, he decided to use the killing skills he had learned. This is the "profession" that has sustained him in the years since. When we meet him though, he's decided he's had enough. He's ready to retire. But first, he's persuaded to take one last job. It is a job that will set him up for life. He gets a half a million dollars payment up front and will get one-and-a-half million when the job is completed. It's an offer he can't refuse.
In this final job, Billy will get to use his skills as a sniper. The man he's been hired (by a mob boss) to kill is being extradited from another state to face murder charges. His potential victim will be delivered to the steps of the courthouse near a rented office where Billy is pursuing his cover story of being a writer. And that's where Billy will take his shot.
Billy spends weeks in the town before the wheels of justice finally deliver the man to him. During that time, he adheres to the cover story by actually trying his hand at writing. He decides to write his life story, but in order to remain true to the dumb self persona he has perfected over the years, he assumes the voice of Benjy Compson, Faulkner's "idiot" child from The Sound and the Fury. This is only one of several literary references King makes in this book. He also mentions Dickens, Wordsworth, Shakespeare, Thomas Hardy, and Cormac McCarthy, to name but a few. Billy is actually quite well-read and throughout the book, he is engrossed in reading Emile Zola's Therese Raquin.  Surprisingly, or perhaps not surprisingly, he finds that he enjoys writing and that he has a knack for it. So in a reversal of The Shining where a writer became a killer, here the killer becomes a writer. Yes, King's literary references include himself!
Leading up to completing his job, Billy becomes concerned that there is a plan to get rid of him after he does the deed, and he makes alternative getaway plans. He holes up in a basement apartment in town instead of getting out of town as the mob boss had made arrangements for. While in his apartment one night, he sees three men in a van dump a girl's body on the street by where he lives. He goes out to check on her, finds her alive, and brings her inside. She had been drugged and gang-raped by the three men. I had been enjoying the book quite a lot up to this point, but this addition to the plot just seemed awkward and unnecessary to me. But there it is.
The woman is 21-year-old Alice and she and Billy develop quite a close but platonic relationship over the next several weeks.
All of this takes place in about the first third of the book. The rest of the book involves Billy, with Alice at his side, tracking down the mobster who had reneged on making the final payment for the job and his boss, a right-wing media tycoon (who sounds a lot like you-know-who) who had gotten the mobster to hire him. It is a rousing good tale and even though the book is not perfect, King's ability to keep the flow going and keep the story vivid is impressive. Maybe that's why he remains such a popular and successful writer year after year.
My rating: 4 of 5 stars
books reading reviews Stephen King