One of my very favorite winter visitors is the dainty little Chipping Sparrow, cutest of all the sparrows in my opinion. The chippie is the American Bird Conservancy's "Bird of the Week" and the good news about this bird of open forests, shrubby understories, and human-altered landscapes is that its population is in good shape. Its numbers are actually increasing.
*~*~*~*
The big environmental news in this country this week was, of course, Hurricane Ida. At the end of the week, the full extent of the damage done by the big storm in Louisiana could still not be assessed. Some places were still inaccessible and some people were still without electricity. What was clear was that the hurricane was made much, much worse by the effects of climate change.
*~*~*~*
As the storm worked its way toward the northeast, it created devastation over a large swath of the country but the New York and New Jersey area seemed to get the very worst of it accompanied by a significant loss of life. At the week's end, the final toll of deaths was still uncertain.
*~*~*~*
Like other information about the storm, the amount of environmental damage that it created cannot yet be fully determined. There were reports of an oil slick around at least one oil rig in the Gulf after the storm passed.
*~*~*~*
And on the West Coast, the big problem is still the raging wildfires, particularly the Caldor Fire in California which threatened the Lake Tahoe area resulting in massive evacuations.
*~*~*~*
Museum collectors surveyed the avian fauna of Colombia a hundred years ago. Now modern researchers are investigating how much of it remains in what was once an "ocean of forest" but has been significantly altered by humans over the past century.
*~*~*~* 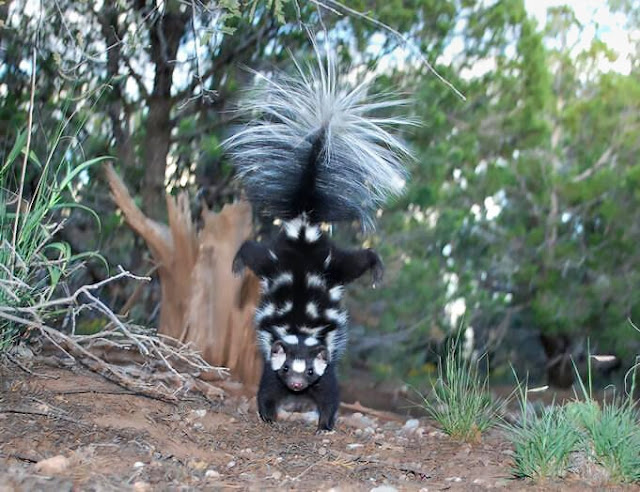 Most of us are probably familiar with the striped skunk, but did you know that it has a very acrobatic spotted cousin?
*~*~*~*
Citizen science data from sites like eBird are helping scientists to learn more about three alpine ptarmigan species, the Willow Ptarmigan, Rock Ptarmigan, and White-tailed Ptarmigan. All three are being stressed by increasing temperatures in their habitats in British Columbia.
*~*~*~*
The Revelator's species spotlight this week feature's Baird's tapir, an endangered mammal that is related to rhinos and horses and has an elephant-like nose. It is called the "gardener of the forest" and is a valuable ally in the fight against climate change.
*~*~*~*
An alarming new global study has found that up to one-half of the world's wild tree species could be at risk of extinction. The researchers call for urgent action to prevent an ecosystem collapse.
*~*~*~*
Tiny tracking devices that can be carried by songbirds without damaging the birds have been an important advancement in avian research in recent years. Now, these devices are being used to track a threatened species of the coniferous forests of Canada, the Bicknell's Thrush. Researchers hope to be able to unravel some of the mysteries of this secretive little bird.
*~*~*~*
The previous administration had imposed an environmental rule that allowed fertilizers, pesticides, and industrial chemicals to flow into small streams, marshes, and wetlands. This week, a federal judge in Arizona struck down that rule citing "fundamental, substantive flaws" in the policy that could cause "serious environmental harm."
*~*~*~*
The mysterious deaths of a family and their dog while hiking in the Sierra National Forest last month remain a mystery. Authorities have not been able to determine the cause of the deaths but the suspicion is that it is related to the environment and the Forest Service has closed trails and recreation sites in the area where the bodies were found while the investigation proceeds.
*~*~*~*
Mississippi Kites are currently passing through Texas on the way to their winter homes in South America. One of my fellow Texas bloggers in Austin was lucky enough to be visited by a large flock of the birds this week.
*~*~*~*
The death of a year-old humpback whale calf in the waters of the Stellwagen Bank national marine sanctuary was a tragedy for the whales but presented a smorgasbord for predators including eight great white sharks that were documented feeding on the carcass.
*~*~*~*
The bird formerly called McCown's Longspur has been renamed as the Thick-billed Longspur because the naturalist for whom it was originally named had an unsavory history. The bird, which is increasingly hard to find, is an iconic species of the Canadian prairie.
*~*~*~*
Some of the smaller mammals that are endangered frequently get overlooked as we focus our attention on the more charismatic species. But these little guys, like mice and voles, are essential parts of their native ecosystems and their loss would threaten the continued survival of those systems.
*~*~*~*
Solar energy is helping to clean up the historic Aztec-era canals of Mexico City. Mexican scientists have developed a "nanobubble" system based on solar energy that improves the water quality in the canals.
*~*~*~*
The "Southern Blob" is a region in the southwest Pacific Ocean that is about the size of Australia and contains unusually warm water. The Blob is contributing to megadrought in South America's coastal region including Chile, Argentina, and parts of the Andes Mountains.
*~*~*~*
Finally, here's an article about "links from the brink" that includes both good and bad news and offers some advice on reversing the "insect apocalypse."
weekly roundup