Strangers on a Train by Patricia Highsmith: A review 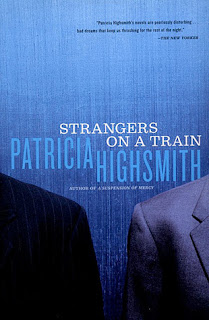 This is the second of Patricia Highsmith's books that I had on my reading list for the summer. (The first was The Talented Mr. Ripley.) This book was actually her debut novel published in 1950. It was adapted as a screenplay for the classic 1951 movie directed by Alfred Hitchcock. Many years later, I saw the movie as the late show on television one night. It made quite an impression on me at the time, although I can't now recall how closely it followed the book. My vague recollection is that there are differences, but don't hold me to that.

The basic plot of the book - and the movie - is probably pretty well known by most people. After all, it's right there in the title of the book. Two strangers meet on a train. One is a successful architect named Guy Haines. He is unhappily married and hoping to convince his wife not to oppose a divorce. He is anxious for a divorce because he is in love with someone else who he hopes to marry. He is on the train to travel to his hometown in Texas where his wife is living. He will meet with her to discuss the divorce.

The other stranger is Charles Anthony Bruno. Bruno is a certifiable psychopath. That becomes clear early on in their conversation. In addition to being a psychopath, he is an alcoholic, a bad combination. Bruno is obsessed with his mother and he hates his stepfather. As the two men talk, Bruno draws Haines out about his relationship with his wife and points out to him how much simpler his life would be if his wife were not on the scene. There would be no worrying about the legal niceties of divorce; he could simply get on with his life.

It's a short step from this conversation to Bruno's next suggestion: He has an idea for the perfect murder or murders. He could kill Haines' wife and Haines could kill his stepfather. The murders would be perfect because there would be no reason to suspect the killers since they don't know the victims and no one would be aware that the two of them had ever met. Guy is horrified by the suggestion and turns him down. The two part company. A few weeks later Guy's wife is murdered. He knows that Bruno must have done it.

Already a nervous wreck after the death of his wife, Guy becomes even more anxious and apprehensive when Bruno starts contacting him and then stalking him. The pressure becomes intense and it seems that the only way he will get any relief is if he does what Bruno wants and kills his stepfather. Eventually, he gives in and does as Bruno has instructed. That doesn't end it though, because Bruno keeps stalking him, showing up wherever Guy goes. His life becomes a nightmare.

The writing in this book does feel dated. Well, after all, it was written more than seventy years ago. Still, Highsmith excelled at constructing and executing her plot in such a way as to create maximum tension and expectation. One can feel the menace build as the true dimensions of Bruno's psychopathy become evident. Moreover, as the psychological pressure applied to Guy Haines begins to push him over the edge into madness, the suspense keeps mounting. Will he or won't he commit murder? And will they or won't they both get away with it? Is there any clue that would allow a sharp detective to piece the whole story together and bring the miscreants to justice? Read the book and find out!