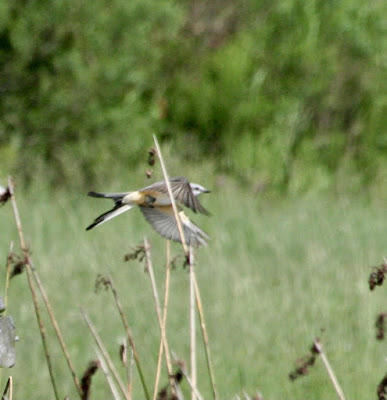 A young Scissor-tailed Flycatcher in flight. He hasn't yet developed the long iconic tail feathers of his species but you can see the beginning of the "scissor."
*~*~*~*
Reservoir levels throughout the West are dropping drastically as the prolonged drought continues unabated. Many are at historically low levels already. The unprecedented heat is further stressing the water supply and the surrounding landscape.
*~*~*~*
The UN has drafted an ambitious plan to halt biodiversity loss and cut the extinction rate by a factor of ten. The plan involves eliminating plastic pollution, reducing pesticide use, halving the rate of invasive species, and eliminating $500 billion of harmful government subsidies. The goal is to help halt and reverse the ecological destruction of Earth by the end of the decade.
*~*~*~*
An aggressive male Mute Swan, a nonnative species, was set to be euthanized in Brick Township, New Jersey, but an unusual twist to his story appears to have given him a reprieve.
*~*~*~*
This is troubling news. Scientists have confirmed that the Amazon rainforest, sometimes referred to as Earth's lungs, is now emitting more carbon dioxide than it is able to absorb.
*~*~*~*
Scientists warn that there could be an increase in flooding in the next decade due to a double whammy from climate change and a "wobble" by the moon as it changes its angle relative to the equator over time. It is something that coastal communities need to be aware of and prepare for.
*~*~*~*
But we don't need to wait for the next decade to see the devastating effects of floods. Raging floods in Western Europe this week have left scores dead and hundreds missing and still unaccounted for.
*~*~*~*
I find it amazing and alarming that there have been no limits set for PFAS "forever chemicals" in Americans' drinking water, but now the Environmental Protection Action is considering placing such limits. Seems like a no-brainer to me.
*~*~*~* 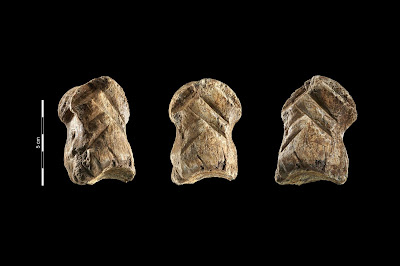 Is this carved deer bone, found in a cave in Germany, an example of Neanderthal art? Neanderthals have long been underestimated in their technological and cultural achievements because so few of their artifacts have been found, but the more we learn about them the more we see that they used sophisticated tools, buried their dead, and, of course, they mated with Homo sapiens. Modern humans of European ancestry generally have one to two percent Neanderthal DNA.
*~*~*~*
People who get tired of their pet goldfish and decide to dump them in a local waterway are creating an invasive species problem. Those goldfish can grow to football size and they can degrade the environment in which they live rendering it uninhabitable for native species.
*~*~*~*
Swarms of fireflies have the ability to synchronize the light flashes from their abdomens. Apparently, the key is for the swarm to reach a particular density, known only to the fireflies, and then their flashes become synchronous.
*~*~*~*
Scientists have discovered that sea otters have metabolisms that work at a rate three times what might be expected for a creature of their size. They use much of that energy to generate heat and thus they are able to keep themselves warm and toasty even in the frigid waters of the Arctic.
*~*~*~*
Froghoppers are amazing little insects that have such strong suction capability that if they were sitting at the top of the Statue of Liberty they would be able to drink from a glass of water on the ground if they had a straw long enough.
*~*~*~*
As we become more sensitized to the effects that words can have, even the names we have given to some creatures are being reevaluated and changed. The latest example of this is "gypsy moths" or "gypsy ants." The name gypsy is deemed to be derogatory toward the Romani people and the Entomological Society of America will no longer use it.
*~*~*~* 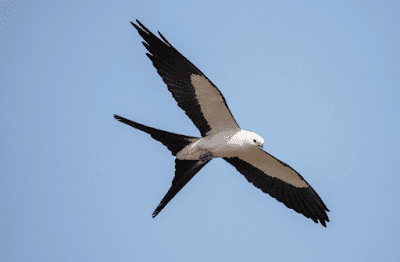 This beautiful bird of prey is a Swallow-tailed Kite. Loss of or degradation of habitat has been a problem for these birds in recent years, but now a coalition of organizations has come together to try to maintain and improve habitat conditions for the kites and other forest birds.
*~*~*~*
Have you ever seen a snail with a computer? Well, you might if you go to the wilds of Tahiti. A project there has fitted rosy wolf snails with tiny computers in order to investigate the reasons for the extinction of some snail species there and the survival of others.
*~*~*~*
The Oregon Fish and Wildlife Commission has declared the Marbled Murrelet as endangered under the state's Endangered Species Act. The state joins California and Washington in giving such protection to the little "forest seabird."
*~*~*~*
The wildfires tearing through the American West are endangering Native American tribal lands in some areas adding even more challenges to people who are struggling to save water.
*~*~*~*
Japanese beetles are back. The attractive little insects can be extremely destructive to over 300 plant species that they feed on in North America. So how do you fight them? There are actually some strategies that can help.
*~*~*~*
Bird conservation groups have filed suit in New York to improve renewable energy regulation there. One of the issues they want to be addressed is minimizing avoidable impacts to birds by wind turbines.
*~*~*~*
Last year pandemic precautions virtually halted all work on raising endangered Whooping Cranes for release into the wild. With the easing of those precautions, the efforts are back on track and fourteen little crane chicks are being raised in facilities from New Orleans to Calgary for release later this year.
*~*~*~*
How to make houses safe in a changing climate is only one of the challenges we now face but experts say that climate-resilient houses are an actual possibility even in the present.
*~*~*~*
Goats are one weapon that New Yorkers are using to fight against invasive plant species in their parks. The goats have been used in parks in the past but last year was skipped. Now they are back in Riverside Park and New Yorkers are delighted. They will even be able to use their new ranked-choice voting system to choose their favorite goat!
weekly roundup