The Maidens by Alex Michaelides: A review 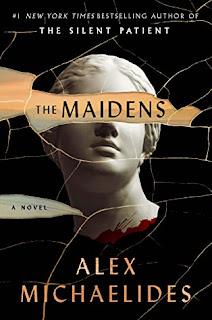 I read and reviewed Alex Michaelides' first novel, The Silent Patient, last year. I mostly enjoyed the experience and so I was up for another ride with him this year. The Maidens is his latest effort and frankly, it almost seems like a ripoff of the earlier book. Once again we have a psychotherapist who tries to solve a mystery. This time it is Mariana Andros, a young woman who was widowed over a year earlier when her husband drowned off a Greek island. She is still mourning that loss when she receives a distraught phone call from her niece, Zoe, who is a student at Cambridge. Zoe is frantic because a young woman, a fellow student who she knows has been murdered. Mariana rushes to Cambridge to support and protect her niece.
Now, I'm not familiar with Cambridge, so I'll have to defer to Michaelides in his description of the culture and society there, but if it is correct, then I think the school is ready for a bit of an update to bring it into the twenty-first century. We have the bowler-hatted porters who seem to control things and the "buttery" that provides food. And Michaelides' Cambridge apparently has been utterly bypassed by any awareness of the possibility and consequences of sexual misconduct between professors and students in the #MeToo era. Here we have a secret society of female-only students who are completely in thrall to a brilliant and handsome classics professor named Edward Fosca. He calls them "The Maidens." Nothing creepy about that.
The Maidens follow Fosca without question. He conducts private tutorials with each of them and throws parties for his students only. There's no mention of any of his male students if he has any or if they get invited to those parties. None of the college's administrators take any notice of this or find it unusual or questionable. Then the Maidens start getting murdered one by one in fairly gruesome and ritualistic fashion. That dead student that Zoe called her aunt about was the first murder. Two more such murders ensue, but the professor seems unconcerned about the fact that his followers are being picked off. He basically shrugs and says, "Oh, well, whattaya gonna do?"
The policeman in charge of the investigation is Chief Inspector Sangha but he doesn't dazzle us with his competence. Mariana is convinced that Fosca himself is responsible but she is unable to persuade others, so she carries on her own investigation. And, oh yes, along the way she locks eyes with a graduate student in mathematics who falls instantly in love with her and proposes soon after.
Meanwhile, this narrative is being interspersed with information about Mariana's backstory and her life with her husband and with Zoe. And we are getting a third perspective from the unknown killer. It's all meant to build suspense and to guide us toward Michaelides' unexpected and, I thought, highly unlikely conclusion.
I finished reading this book a week ago and my assessment of it has been marinating since then. I remember a similar experience with The Silent Patient. In the end, I decided to be generous in my rating for that book but my generosity has taken a hit over the last year. This book feels quite derivative of that first effort. The therapist protagonist of the first book even makes an appearance in this one to give Mariana some guidance at one point. The writing is pedestrian and the characters are flat. None of them really sparked my empathy. (Maybe that has taken a hit, too.) My debate with myself this time was whether to award the book two stars or three. I decided to be ruthless; two it is.
My rating: 2 of 5 stars
Alex Michaelides books reading reviews