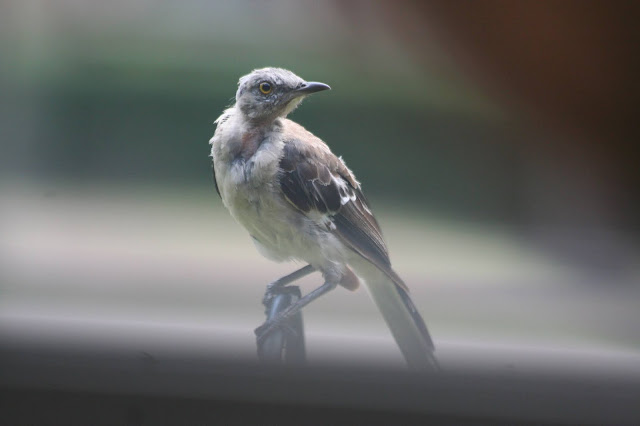 He looks a bit raggedy now but give him a few weeks and this molting Northern Mockingbird will have new feathers and will be sleek and beautiful once again.

Some of the western wildfires are so big and intense that they create their own weather systems. There have been incidents of fire tornadoes, as well as more commonly clouds, haze, and other phenomena. Smoky haze from the fires has even reached as far as New York City.

The lower 48 states cannot look for any relief from the heat in the coming week, according to meteorologists. Another "heat dome" is expected which this time will reach parts of the central and eastern United States that were largely spared from the previous such phenomenon. Early estimates are that the contiguous states will have temperatures that reach ten to fifteen degrees above normal.

Torrential rain resulted in massive flooding in central China this week, overflowing the banks of rivers and overwhelming dams and the public transport system. Thousands of people have been forced to evacuate and the final death toll is still unknown.

The U.S. Fish and Wildlife Service is proposing to withdraw the previous administration's rule that would have slashed millions of acres of critical habitat protections for the endangered Northern Spotted Owl. The new rule would leave far more land protected, reducing the overall protected area by about 2%.

Repeated hurricanes, failed crops, and extreme poverty are driving rural Hondurans to attempt the dangerous trek north to seek refuge at the southern United States border. It is evident that this is not a border crisis, it is a climate crisis.

Scientists and advocates say that neonicotinoid pesticides need tougher regulation. The pesticides have been shown to harm bees, birds, and other wildlife. Scientists urge the Environmental Protection Agency to take action to strengthen regulations within the next year.

The United Nations World Heritage Committee met in the Chinese city of Fuzhou this week and was urged by its Chinese host to designate the Great Barrier Reef as "in danger." The committee was aggressively lobbied by the Australian government to refrain from labeling the reef as such and in the end, their lobbying prevailed. The committee ignored the scientific assessment of UNESCO and did not add the reef to the list of world heritage sites in danger.

A man at a remote mining camp near Nome, Alaska was repeatedly attacked by a grizzly bear over the past week. He was finally rescued when a Coast Guard helicopter aircrew patrolling the area saw his signals for help. The 50 to 60-year-old man had multiple but non-life-threatening injuries and was taken to a hospital.

Maybe we can just blame it all on the men. A Swedish analysis has found that men's spending on goods causes 16% more climate-heating emissions than do women's. The biggest difference, apparently, was men's spending on fuel for their cars.

Research indicates that a virulent and fast-moving coral disease that has swept through the Caribbean could be linked to waste or ballast water from ships. The malady known as stony coral tissue loss disease was first identified in Florida in 2014 and has moved through the whole area since then.

A rare giant opah, or moonfish, three feet long and weighing about 100 pounds, has washed up on the northern Oregon coast. These fish can grow to more than six feet and weigh as much as 600 pounds. It is speculated that the death of the fish may have been caused by the recent heatwave in the area that caused the death of so many marine creatures.

The Straw-headed Bulbul, a resident of Southeast Asia, has a most melodious song and that is its downfall. People want it as a caged bird so they can listen to it sing and the practice of trapping the birds for cages is threatening to drive the bulbul to extinction in the wild.

The science of ecology developed through a western knowledge production process that has existed hand in hand with extraction, violence, and imperialism. As we have become more sensitized to these issues of colonialism, scientists in various fields, including ecology, have made efforts to eradicate the historical symbols of these issues that exist in their fields.

Isla Natividad, a Mexican island that is home to at least 95% of the world's population of Black-vented Shearwaters, had an unwanted visitor in 2019; a rat was seen on the island. Invasive rats could have devastated the shearwaters and that provoked an intense search to find and eradicate the critter.

An ambitious project to rebuild Louisiana's vanishing coastal wetlands promises to provide vital habitat for birds and protection from hurricanes but the project also will disrupt some livelihoods.

Northeastern Siberia has experienced unprecedented 100-degree days recently and now wildfires have spread in the region. The frozen land is burning and this is the third year in a row that residents have seen this happen. It is the worst wildfire season in their memories.

A project in Los Angeles seeks to plant trees in communities that lack tree canopies. Such canopies would, of course, help to protect residents from dangerously high temperatures.

A groundbreaking new law in Maine bans "forever chemicals" as toxic PFAS chemical compounds are known. The ban will take effect in all products by 2030 except in cases where they are deemed "currently unavoidable." Maine is the first state to enact such a broad ban.

There are very many species of birds that have not been observed for long periods of time, but that does not necessarily mean they are extinct. The quest for these lost birds occasionally ends on a happy note as did the discovery of the Black-browed Babbler in Indonesia. The bird had not been seen for 170 years.

In America, we sometimes have raccoons raiding our trash cans for goodies. In Australia, the role of the raccoon is played by the Sulfur-crested Cockatoo. These clever parrots have learned how to open the trash cans in order to explore for tidbits.

Grassland birds, like many others, face a growing loss of habitat but in New England programs are in place to pay farmers for growing crops that give Bobolinks and other grassland birds a boost.

Eugene Robinson of The Washington Post opines that we are fiddling while the world burns and it's time to stop.