The Consequences of Fear by Jacqueline Winspear: A review 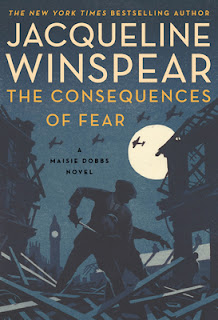 1941 London. England has been at war for two years. German bombs are still falling on the country. Psychologist/detective Maisie Dobbs' contribution to the war effort is to work for British intelligence services evaluating potential candidates for undercover work in France and elsewhere. Meanwhile, she continues to carry on her private detective agency business with the invaluable help of her assistant, Billy Beale.
At the same time, her private life has taken a definite step forward. Her adopted daughter is the light of her life. She stays with Maisie's parents at her home in Kent and Maisie goes there on weekends. Also, she is in an affair with American Mark Scott which seems very promising. Mark better watch his back though. Men who fall in love with Maisie usually wind up dead!
During this period of the war, British intelligence services were employing young boys as runners to deliver messages around London. These young kids ran past decimated buildings and dead bodies, sometimes dodging bombs to deliver their messages. It's outrageous to imagine this now but there was no internet and even phone service was spotty in wartime London of '41. Kid runners were deemed to be the best option.
One of those kid runners was twelve-year-old Freddie Hackett. One night on his way to a delivery, he witnesses two men in hand-to-hand combat. He hides in a doorway and watches in horror as one of the men pulls a knife and stabs the other to death. The murderer walks away. Poor traumatized Freddie continues to hide for a few minutes but then recovers himself and goes to the address he's been given to deliver the message. Imagine his shock when the man who opens the door to receive the message is the murderer!
Freddie tries to report the murder to the police but when they go to check there is no body and the site has been cleaned up. They don't even find any blood. They assume Freddie is simply imagining things and don't investigate any further.
At one time, Freddie had delivered a message to investigator Maisie Dobbs and she had been kind to him. Now he goes to her office with his story and asks for help. Maisie accepts the truth of his report and goes to investigate. At the site, she finds a couple of clues overlooked by the police, including traces of blood, and she determines to find out what has really happened.
Meanwhile, she continues her profiling work for the intelligence services and is sent to Scotland to interview some potential candidates. And there she meets the man who Freddie believes is a murderer. He is with French Resistance and is considered a valuable ally. Maisie's two jobs have collided at this point. How will she resolve her conundrum of helping Freddie while fulfilling her obligations to the intelligence service?
As always in these novels, there is a lot of historical detail and background as well as the background of the characters involved. We learn, for example, that young Freddie's background is particularly fraught with an abusive stepfather and a mother and younger sister with Down Syndrome who he is determined to protect. The tension of it all is driving this twelve-year-old to distraction. But we can be assured that Maisie will find a way to help.
The character of Maisie can often come across as too much of a goody-two-shoes, just a little bit too virtuous, too perfect. And the characters overall do tend to be a bit stereotypical, but the stories are good, the historical facts well-researched. This is the sixteenth entry in the series, the first book of which was published in 2003. On the whole, the quality of the writing has held up well. That remains true with The Consequences of Fear.
My rating: 4 of 5 stars
books Jacqueline Winspear reading reviews