The Decagon House Murders by Yukito Ayatsuji: A review 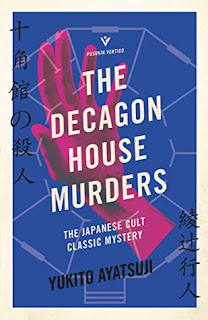 The original Japanese version of this book was published in 1987 during the early "honkaku" movement in Japanese mystery novel writing. In the foreword to this English version, published May 21, 2021, writer Shimada Soji explains that honkaku means orthodox. It is orthodox in the sense that it is a throwback to the golden age of Western mystery writing in the first half of the 20th century. It is a homage to writers like Agatha Christie and John Dickson Carr, to name just two of the most famous.
Honkaku refers to detective stories that are not only literature but to a greater or lesser extent also a game. They generally are "locked room" mysteries or at least take place in isolated locations. This one, for example, takes place on a virtually inaccessible island that has no means of communication with the outside world. The time is March 1986 and the great communication revolution has yet to take place. Honkaku books feature extremely complicated plots and that is certainly true of this one.
During the early part of the movement, the formation of mystery clubs at universities became very popular. The Kyoto University Mystery Club, to give one instance, was founded in 1974. The clubs encouraged the study of classic mysteries and involved the members in playing various whodunit games. Yukito Ayatsuji was an early member of one of these clubs. Ayatsuji's book is a homage to the Queen of Mystery, the great Agatha, and one of her best-known works, And Then There Were None. If you are familiar with that book, you may be able to pick up the clues along the way that point to the solving of the mystery.
The book features seven members of one of those university mystery clubs that decide to visit a remote island where a year earlier grisly multiple murders took place. Four people were found dead there. The body assumed to be the owner of the house was burned beyond recognition. His wife's body had the left hand removed. Two servants who lived with them on the island were also killed. After they were murdered the house where they were found, called the Blue House, was burned. Their murders have never been solved.
There were two houses on the little island, the Blue House that burned and the Decagon House. The Decagon House was designed by the architect who owned both houses and it had ten sides, ten rooms surrounding a common room. There were ten identical doors opening to the rooms which included an entranceway, a kitchen, a bathroom, and seven bedrooms. The mystery club members will stay in this house during their visit and when they arrive each person chooses one of the bedrooms. Throughout the book, these members are not referred to by their Japanese names but by the names of Western mystery writers that each has chosen for him/herself. So, we have Ellery, Agatha, Carr, Orczy, Leroux, Van, and Poe. Two other members - one current and one former - of the club did not make the trip and they remain on the mainland.
A sense of dread seems to permeate the island from when they first set foot on it; not surprising considering the horror that took place there only a year earlier. Each of the members is affected by it to some degree but Orczy is particularly infected with the stress of the place. Meanwhile, back on the mainland, the current and former member of the club who did not make the trip receive anonymous letters which read: "My daughter Chiori was murdered by all of you." The name of the sender on the envelope is Nakamura Seiji, the architect who had supposedly died on the island the year before. We learn that Chiori had also been a member of the mystery club and that she had died after club members encouraged, or maybe forced, her to drink a lot of whisky at a party.
And then the members on the island start dying in mysterious circumstances. The first to go is Orczy who is killed in her own bed. More murders follow. The members are being picked off one by one.
One could be seriously horrified by the multiple murders but the writer saves us from that because his characters are basically one-dimensional paper dolls. We are not meant to identify with them. They are simply tropes for the delivery of the pieces of the puzzle, the game that the writer wants us to play. The game of following the clues to figure out whodunit, even as Agatha Christie would have had us do.
I've read a lot of Christie, including And Then There Were None, and I had a pretty good idea of how this was all going to play out. But there were some surprises along the way and an epilog gives a further twist to the story.
This translation was done by Hong-Li Wong and it was smooth reading for the most part with only a few bits that felt clunky and awkward. The translator's job of remaining true to the original text while also providing a readable text in another quite different language cannot be an easy one.
My rating: 3 of 5 stars
books reading reviews Yukito Ayatsuji