When the Stars Go Dark by Paula McLain: A review 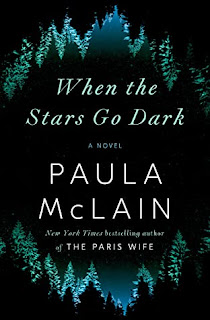 This is billed as Paula McLain's debut thriller and thrilling it certainly is. It is a dark tale set in the early 1990s and featuring a female San Francisco police detective whose job has been searching for missing persons, particularly missing children. Usually, these children are young girls, teenagers, or young women and their stories all too frequently end in tragedy. Then, an unspeakable personal tragedy hits this detective who is named Anna Hart and she flees San Francisco and heads to the town where she grew up, Mendocino. But even there, she finds that the local police, including its chief with whom she went to school, are working on a case involving a missing teenage girl. Cameron Curtis is the daughter of a former movie star who lives in the area and her disappearance has many similarities to a historical case, the disappearance and murder of Jenny Ledford, a girl from Anna's high school. Jenny had been in Anna's circle of friends. Anna cannot help herself; she becomes embroiled in the investigation.
As the investigation proceeds, the detectives learn of other missing girls from towns in the area. Is it possible that the cases are connected? Are they dealing with one perpetrator?
As the narrative unfolds, we learn of Anna's backstory and her own traumatic childhood that has given her a particular empathy for the children in these cases. Anna's mother had overdosed on Christmas Eve when Anna was eight years old, leaving her with two younger siblings whom she adored and tried to care for. Social Services learned of the situation and stepped in. The children were split up and Anna was sent to a series of foster homes until she finally ended up with two loving foster parents who raised her and gave her a grounding for her life. The father was a forest ranger and he taught her to love the outdoors and gave her essential survival skills that would later stand her in good stead. The mother was an empathetic Earth Mother type who had more than a touch of mysticism about her. She imparted all of this persona to Anna. The combination of the skills she learned from both of her parents has made Anna perhaps the perfect match for the job that she does.
Anna's theory about Cameron and some of the other girls' disappearances is that a "certain set of experiences made them vulnerable, and not just in a general way either but to the particular predators who targeted them." She believes that studying the girls' psyches is just as important to cracking the cases as is the profiling of the bad guys. She calls the markers of early childhood trauma "bat signals" and they identify kids to whom really terrible things have happened, things that have broken down the children's ability to cope. The bat signal goes out and every psychopath, sadist, sociopath, alcoholic, narcissist sees it and responds. Reading all of this is difficult but engrossing and I was thankful that the writer did not dwell on the torments inflicted on children. They are a part of the story but she does not wallow in them. Her point in all of this is that trauma should be exposed because when it stays hidden it can fester and ruin lives.
In trying to find out what happened to Cameron and the other girls, Anna is willing to ask for help from unusual sources. From a psychic, for example. She, of course, learned this openness to alternative methods at her mother's knee, and the psychic she consults does actually offer some useful guidance.
As the narrative has progressed, we have continued to learn more about Anna's background and the traumas she has experienced. There's one last trauma as Anna faces down a kidnapper/killer in the forest on her own. But thanks to her father's teaching, she knows how to survive.
And finally, we learn of the gutwrenching event that caused Anna to flee San Francisco and seek solace in her hometown. I was completely invested in Anna at this point and the tears flowed readily as I read. It was the psychic who once again gave Anna and the reader hope that there might still be redemption and joy in life. The book ended on that note of hope.
McLain builds her plot and paces the story just about perfectly in my opinion. Moreover, in Anna, she has given us a character with whom we can identify and empathize. This is not your ordinary dark mystery/thriller; I would term it a literary thriller. The writing is lyrical at times and it educates and informs as well as giving heart-pounding action. I can't think of a thing about it that I would change.
My rating: 5 of 5 stars
books Paula McLain reading reviews