Flights by Olga Tokarczuk: A review 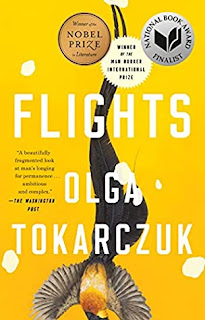 This book is styled as a novel, but, if it is, it is a very strange novel. It is a series of pieces that could be short (some of them only one paragraph) stories, essays, or anecdotal memories. These pieces are not really connected in any way except that they all in one way or another, often very tangentially, relate to travel. Several of them take place on plane trips from here to there. They are all set in Europe, often in the author's native Poland, but reading them is a confusing experience that leaves the reader - at least this reader - rather adrift. I would read a bit and then stop for a while to do something else, but when I came back to the book I would be lost. It was hard to pick up and remember where I was. Not that it mattered, I guess, since the next section might have nothing to do with the last.
The narrator, if indeed one can call her that, seems to be the author herself but is she relating experiences she has had, conversations she has had, observations she has made? She seems to take us back and forth through time and through fact and fiction with no delineation in between. The book reminds me most vividly of Rachel Cusk's Outline trilogy, but in Cusk's work, we get to know her protagonist and so we know that we are dealing with her experiences and observations. That just isn't the case here. This novel seems experimental in its concept and execution. It is certainly creative, but that doesn't necessarily make for an enjoyable reading experience.
And yet, Flights has been highly acclaimed, and it was the winner of the Man Booker International Prize for 2018. That was the same year that Tokarczuk received the Nobel Prize for Literature for her body of work.  In 2019, I read and reviewed her book Drive Your Plow Over the Bones of the Dead and I loved it. It was one of my favorite books of that year. So I was eager to read her other work such as this earlier book. There were some parts of Flights that I really enjoyed, particularly some of the longer "short stories." There is one about the mysterious disappearance of a mother and her child on a small island. Another one involves a woman who returns to Poland after many years abroad in order to help the first man she ever loved to end his life because he is terminally ill and in pain. And then there is the bizarre and apparently true story of how when Chopin died in Paris, his sister carried his heart in a jar back to Warsaw so it could be buried in Poland. These stories captured my interest, but just as I was getting invested in them, they ended and the writer moved on to something else, often to tales of Nature's mistakes, things like fetuses with two heads preserved by specialized museums that feature such oddities. I found it disorienting in the extreme.
So this is a book about travel, civilized travel. As the author notes at one point, "Barbarians don't travel. They simply go to destinations or conduct raids." But I felt a bit like a barbarian reader of the book; I was simply going to a destination but I wasn't able to appreciate the sights or the culture there. And perhaps that is entirely my fault, a lack in my ability to understand what the writer is trying to accomplish here.
I did learn one valuable lesson from this book - the word lethologica and its meaning. It means the inability to remember a particular word or name and I suffer from it occasionally. Now if only I can remember that word I will know how to describe my malady.
My rating: 2 of 5 stars
books Olga Tokarczuk reading reviews