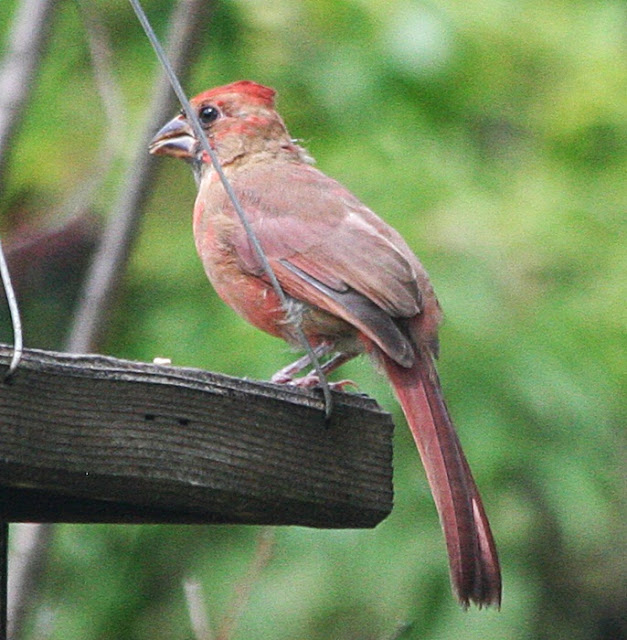 A young Northern Cardinal, identifiable by the dark beak, visits the platform feeder for a snack.
*~*~*~*
Of course, the biggest news of the environment, at least on this continent, this week has been the unprecedented heat wave that has hit the northwestern U.S. and Canada. The poster setting for this incredible event has been the unfortunate village of Lytton in British Columbia which became the first place in Canada to record a temperature of above 113 degrees F last Sunday. But the heat wave had more in store for Lytton. On Tuesday, it posted an almost unbelievable high temperature of 121 degrees F. By Wednesday, wildfires had broken out in British Columbia, and one of them roared through the village, leaving a hellscape behind. There is not yet an accounting throughout the region, where few have air conditioning, of all the lives that have been lost because of the heat but it is believed that the final total will be in the hundreds.
*~*~*~*
It's not just the Northwest of course. Al Jazeera has a map that shows the hottest places on Earth, records that will probably be broken in many places this year.
*~*~*~*
Do you think this will change the minds of any of the climate change deniers? 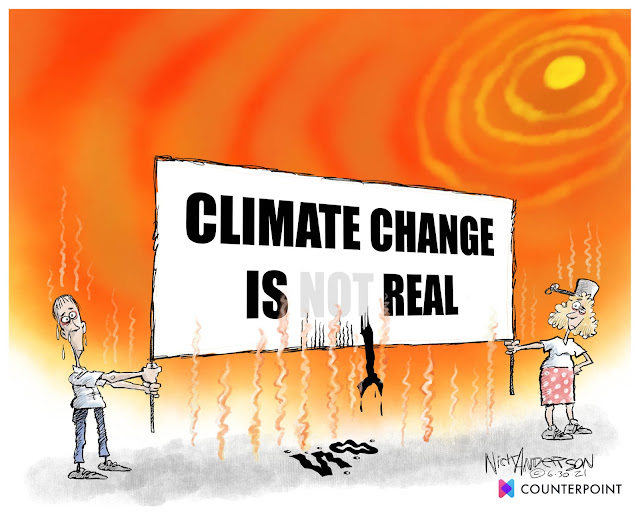 Maybe Senator Inhofe would like to bring his snowball back to the Senate floor to prove it's all just a hoax dreamed up by the Chinese!
*~*~*~*
And what does all of this mean for the birds that migrate through that region? Nothing good. Extreme drought conditions have already stirred struggles over water in the Klamath Basin, an area of particular importance for migratory birds. The millions of birds that migrate through the basin each year rely on a complex of wildlife refuges that are quickly running dry.
*~*~*~*
What are the best and worst news stories for the environment in the first half of this year? The Revelator has a list.
*~*~*~*
One of our strongest allies in the battle against intense and killing heat waves is trees. Scientists say their presence can lower urban temperatures by as much as ten degrees. I can personally confirm that. It's why I have benches stationed under various trees in my yard. When I'm working in the brutal Texas heat, all I need to refresh myself is to go and sit for a few minutes in the shade of one of my trees. I'm sure those trees also help to reduce our electric bill in the summer by helping to keep the house cooler. Superheroes, indeed.
*~*~*~*
Just north of Los Angeles is the 270,000 acre Tejon Ranch with its centuries-old native oaks and grounds roamed by endangered mountain lions and patrolled from above by endangered California Condors. Now developers would like to build a city there. Scientists and conservationists say that would be a disaster.
*~*~*~*
Yet another consequence of the western drought is that animals are seeking refuge from the drying landscape and are increasingly finding their way into urban areas. This brings animals like bears and snakes as well as others into closer contact with humans and unfortunately that is often not a good thing for the animal.
*~*~*~*
Florida has also been much in the news this week because of the tragic condo collapse and the approaching hurricane. It seems likely that climate change once again has played a part and some Miami activists are facing up to the problem and teaming up with activists from other regions to try to find equitable solutions.
*~*~*~*
The House of Representatives has given legislative approval to a resolution undoing a Trump-era environmental rule that relaxed requirements of a 2016 Obama administration rule that targeted methane emissions from leaks and flares in oil and gas wells.
*~*~*~*
Methane is a powerful greenhouse gas and reducing emissions of it is an important step in fighting climate change. This includes the capping of abandoned oil wells across the country that are still spewing the gas.
*~*~*~*
Climate change does seem to hit hardest at communities that may not have the resources to combat it. Its effects are falling particularly heavily on Native American communities that are often located on marginal lands.
*~*~*~*
A new study has found that the Arctic's last ice area, a refuge for polar bears and other Arctic wildlife that depend on ice, may not be as stable as had been supposed. It appears it is less resilient to warming than thought.
*~*~*~*
In the world of astrophysics, gravitational wave detectors in the U.S. and Europe have detected the first signals from two neutron stars crashing into black holes hundreds of millions of light-years away. If you understand the implications of that you have a better mind than mine but it certainly makes the hearts of astrophysicists beat a little faster.
*~*~*~*
The countries of the European Union on Monday gave their final seal of approval to a law that will make the union's greenhouse gas emissions targets legally binding. Meanwhile, their policymakers are preparing a huge new package of policies to fight climate change.
*~*~*~*
The Old Faithful geyser in Yellowstone National Park could be faithful no more if the temperatures continue to rise. If temperatures rise by 10 degrees F by the century's end as has been predicted, scientists believe that the geyser may stop erupting altogether.
*~*~*~*
The current heat wave in the Northwest is only a taste of what is to come. It is expected to be a blistering summer for people without air conditioning and deaths from the heat will continue to rise.
*~*~*~*
Canada has announced huge cuts to its commercial fishing in order to protect and conserve the wild salmon that are food for orcas.
*~*~*~* 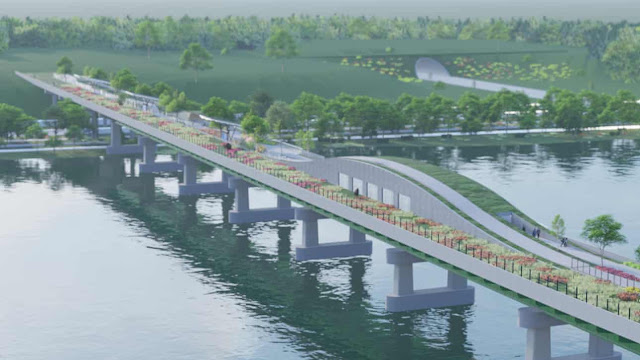 This is an artist's rendering of a potential bridge across the Mississippi River that conservationists are hoping will become a highway for bison. The departments of transportation of Iowa and Illinois are considering the proposal. If completed, it would be the longest human-made wildlife crossing in the world.
weekly roundup