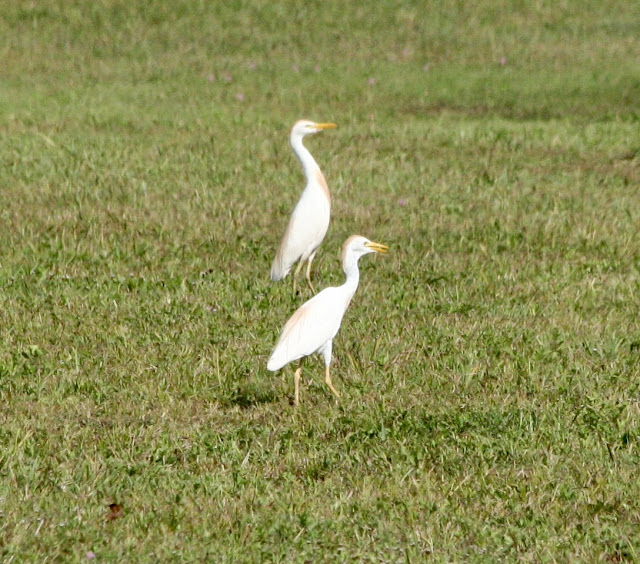 Two Cattle Egrets in their breeding plumage explore a field in Brazos Bend State Park.
*~*~*~*
Birds are still dying in significant numbers from an unknown disease in at least ten states. Scientists have been able to rule out some causes such as chlamydia or West Nile virus but so far they have not been able to identify exactly what the disease is or from where it might be emanating.
*~*~*~*
It will probably not come as a surprise to anyone who has been paying attention to learn that the month just past was the hottest June on record for North America. Satellite data show that temperature peaks are higher and they last longer than they have historically.
*~*~*~*
It will also not be a surprise to most readers of this blog that the analysis of recent record-breaking heat in the West indicates that human-caused climate change has played its part. An international team of climate researchers states that it would have been virtually impossible for temperatures to reach the extremes that they did without an assist from global warming.
*~*~*~*
We have become somewhat accustomed to stories about rising sea levels, but it's not only the oceans that are being affected. In North America, for example, the Great Lakes are being expanded into uncharted territory by the effects of climate change. The expansion of Lake Michigan presents a considerable problem for Chicago which was essentially built on a swamp.
*~*~*~*
Good news for Giant Pandas! China has announced that their iconic animal is no longer endangered in the wild. There are now approximately 1800 of the critters roaming the Chinese forests and their status has been upgraded to vulnerable.
*~*~*~*
Honduran indigenous environmentalist Berta Caceres was murdered by hired hitmen on March 2, 2016, after years of her fight against the building of a huge dam. Now, a U.S.-trained former Honduran army intelligence officer who was the president of an internationally financed hydroelectric company that had pushed for the dam has been found guilty of collaboration in ordering the assassination.
*~*~*~*
Wildfires in forests we understand but what about a fire on the surface of the Gulf of Mexico? That is what happened last week and it was apparently the result of leaks from an underwater oil pipeline. This raises serious questions about the safety of such pipelines.
*~*~*~*
Seahorses are fascinating and charismatic little creatures that could serve as a flagship species for ocean conservation but they are in danger of extinction and their greatest threat seems to come from the destruction of their habitat. Conservationists are working to reverse that destruction.
*~*~*~*
You might suppose that rock glaciers would be fairly barren places, but you would be wrong. In fact, they provide refuge habitats for a number of species in Glacier and Grand Teton National Parks.
*~*~*~*
The governor of California has requested the people and businesses of his state to cut their water usage by 15% as the West continues to suffer through a devastating drought.
*~*~*~*
Researchers from England and Germany have correlated data from human fossils and climate models to show that climate has an effect on human evolution. Their theory is that climate has played a part in shaping both the human body and brain.
*~*~*~*
Hawaii is one of the wettest places on Earth, but even it is suffering through a season of wildfires. The fires there are fed by invasive grasses and by development.
*~*~*~*
Following in the wake of the wildfires in the West comes a new scourge: grasshoppers. The drought has created ideal conditions for grasshopper eggs to hatch and the hatchlings to reach maturity and in adulthood they are insatiable. They are ravaging the land particularly in arid parts of Oregon and Montana.
*~*~*~*
The Maoris may have been the first people to visit Antarctica in the seventh century. Now, a recently published study proposes that Maori principles on the concept of guardianship and stewardship of the environment should govern the management and conservation of the continent.
*~*~*~*
Another somewhat unexpected victim of climate change is Maine's fields of wild blueberries. This is an important crop for the state but the blueberry fields are warming up at a faster rate than the rest of the state and this may render the climate inimical to the growth of the fruit.
*~*~*~*
It is estimated that after protections for gray wolves were removed by the Fish and Wildlife Service about one-third of the population of the animals in Wisconsin was slaughtered by hunters.
*~*~*~*
East Africa's Coral Refuge off the coast of Kenya and Tanzania offers a rare refuge for the species that live there and for the coastal communities who have relied on its waters for food and livelihoods for generations. Here is a history and some amazing pictures of the place.
*~*~*~*
It's estimated that the heat dome that hovered for days over the Canadian Pacific coast probably killed more than a billion marine animals along that coast.
*~*~*~*
Kelp forests are the ocean's most important carbon capture system. They help to clean the air but their population has fallen precipitously. Environmentalists are worried for the future of these forests and for the future of the planet if they disappear.
*~*~*~*
Members of the cephalopod family are very brainy animals and that's no pun. Scientists now think that cuttlefish may hold the key to understanding the evolutionary secrets of that intelligence.
*~*~*~*
Snow leopards are elusive big cats that have historically been able to survive alongside pastoral communities of humans, but can they continue to sustain themselves in the face of large-scale changes in land use? Conservationists are trying to make sure that the answer to that question is yes.
*~*~*~*
This blogger went looking for the endangered western Monarch butterfly in a milkweed meadow in Montana. He didn't find them but he did find a number of other creatures that also depend on the milkweed, which he prefers to call Monarch Manna.
weekly roundup