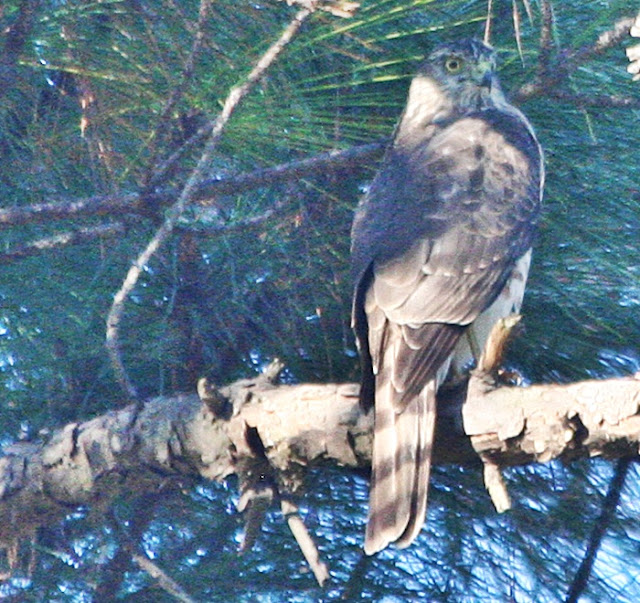 A Cooper's Hawk keeping a close eye on my backyard from a neighbor's pine tree.

A new study tracking the planet's vital signs has found that many of the key indicators of global warming, such as carbon emissions, ocean acidification, and clearing of the Amazon rainforest, are getting worse and are either approaching or already exceeding key tipping points in the global climate crisis.

Utah's Great Salt Lake is not so great anymore. Its water level has reached a historic low and it is expected to continue to drop in the coming months. This could prove disastrous for the millions of birds that rely on the lake.

Meanwhile, California's Salton Sea, once an idyllic lake, is shrinking and has become a home to dangerous algal blooms, endless dust, and toxic air that is making residents sick.

Wouldn't it be great to have Shazam for birds so you can point your phone app toward a singing bird and it will be identified for you? In fact, such an app exists. The Cornell Lab of Ornithology has recently released an updated version of its Merlin Bird ID app that though it doesn't claim to be 100% accurate is pretty close to it.

How do wildfires start and spread? The Capital Weather Gang explains.

Wildfires are a problem right around the globe. In Sardinia, an area in the western part of the Italian island has been hit by an unprecedented wildfire that has burned a 25-mile swath.

One method used to counteract and control wildfires is prescribed burns. An area is deliberately set alight to burn off brush and fallen trees that could otherwise fuel a wildfire.

The state of Wisconsin seems determined to extirpate its wolf population. After allowing hunters to blow right past the quota set during the February hunt that took place during the animals' breeding season, the state now plans to allow another hunt in the fall. Unless the Fish and Wildlife Service chooses to once again put the animals on the Endangered Species protected list, their chances of survival appear slim.

Juvenile great white sharks are colonizing new areas along the central and southern California coast. The young sharks swim near the beaches where surfers and swimmers play. They show no interest in the humans with whom they share the waters.

A team of 99 scientists has finally deciphered the entire human genome two decades after the first draft was unveiled. In the process, they uncovered more than 100 previously unknown genes that are probably functional and many new variants that may be linked to diseases.

Researchers studying grizzly bears in British Columbia have undertaken a new project of tracking orphan cubs that have been reared in a shelter and returned to the wild to see if they are actually able to thrive in the wild.

What happens to us when a part of our world disappears, when a species that we have known becomes extinct? What, for example, would our world be like if there were no more Bobolinks?

Humans are able to use the stars to navigate around the planet. This was more common in the past, of course. But we are not the only ones who use starlight to navigate; many animals do so. Even dung beetles!

An analysis that used public health studies concluded that for every 4,434 metric tons of carbon dioxide produced, one person globally will die. This figure represents the average lifetime emissions currently being generated by 3.5 Americans.

From the world of archaeology comes the announcement that a Stone Age Acheulian ax found in Morocco has been dated to 1.3 million years ago. The find pushes back by hundreds of thousands of years the start date in North Africa of the Acheulian stone tool industry that is associated with a key human ancestor, Homo erectus.

Thunder Bay National Marine Sanctuary in Lake Huron is part of a system of underwater reserves around the country. This sanctuary is home to nearly 100 known well-preserved shipwrecks, some more than a hundred years old.

Big oil has a filthy legacy in Africa. They move out and leave their mess behind. In Nigeria, the fisherwomen of the Niger Delta are fighting back. They are demanding that Chevron and other big oil companies be held to account for the pollution they have created. (Shades of How Beautiful We Were by Imbolo Mbue which I read earlier this year.)

The drought and a confluence of extreme conditions are threatening the trout population in Montana's legendary waters. The state this week announced a slate of new restrictions, including some outright closures, in order to protect the top trout streams.

A new study of 176 nations found that the top ten countries most vulnerable to climate change impacts and environmental pollution are located in Africa and South Asia, with the Democratic Republic of Congo being the worst off.

Researchers have identified threats facing dozens of bat species in parts of the world that are predicted to get hotter and drier. This means that many species will have to shift their ranges to find suitable habitats. There are some steps that humans can take to help them.

Gardeners can now grow okra in Anchorage! Jeff Lowenfels has written a gardening column for The Anchorage Daily News since November 1976. Though he never intended it, his column over those 45 years has documented the changes caused by climate change. 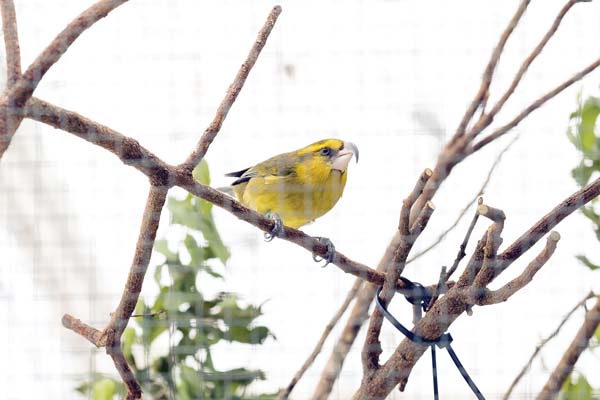 This is a male Kiwikiu, a rare Hawaiian native that was thought to be dead, after having been released to the wild in 2019. But recently, after having been missing for 605 days, he has been found again. He lives! Never give up hope.
*~*~*~*
Can you answer ten questions about the warming climate?