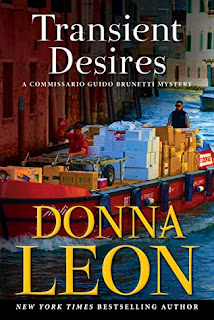 Donna Leon published her first Guido Brunetti mystery in 1992. Twenty-nine more have followed. This is the thirtieth in the series. A few years ago I was seriously addicted to this series and I read the first thirteen entries in order. Then I tired of it and moved on to other things. When I read a synopsis of this latest book, my interest was piqued once again and I decided to read it. It goes a bit against my nature, but I have to admit I am never going to read all the seventeen intervening books in order, so why not read number thirty? Guido won't mind.
In fact, in reading this book, it seemed to me that no time had passed and nothing had changed between number thirteen and number thirty. All the well-known characters are still there and the main character, Venice, seems not to have changed at all. Government corruption, bureaucratic inertia, rampant nepotism, and rising seas still plague the city. The tourists are still as badly behaved as ever and immigrants both legal and illegal are a challenge to the city's social services. People are judged by their accents and in order to tease out information, Brunetti is often forced to speak the local vernacular, Veneziano, rather than more cultured Italian. Veneziano is virtually incomprehensible to outsiders. At one point, Brunetti ruminates on the differences between Veneziano and the Neapolitan colloquial speech and the assumptions that he and others make based on those differences. Prejudice, it seems, is rampant in Venetian society and even exists in someone as compassionate and enlightened as Guido Brunetti. These kinds of cogent observations are one of the hallmarks of this series.
The mystery that Guido is called upon to solve this time involves two young Italian men and two young American women tourists. The four had gone for a joyride in the laguna on one Saturday night, but the joyride came to an abrupt end when the motorboat they were in hit an underwater pylon. The impact knocked all four of them off their feet and three of them, the pilot of the boat and the two women, were seriously injured. The pilot of the boat had taken it out without the permission of the owner, his uncle. As we eventually learn, the uncle is involved in nefarious activities, including smuggling. Among the things he smuggles are women to be sold into the sex trade. Human trafficking, apparently, has become big business in Venice and the boat used for the joyride is one of the vessels used in that business.
After the accident, the two men take the women to the dock of the hospital and unload them there. They are both unconscious by this time. One of the young men goes to push the emergency button to alert hospital staff, then he jumps back into the boat and the men flee. What they don't know is that the emergency button is disconnected and no one knows the women are there until an employee goes to the dock for a smoke break and discovers them.  Guido and his team are called to investigate, but since the accident happened on the water, they must coordinate with the Guardia Costiera and so they become involved in the probe into smuggling and human trafficking. All of this forces Guido out of his comfort zone and makes him confront the ugly abuse of immigrants as human cargo.
Meantime, Guido continues his practice of going home for lunch every day where his professor wife will have managed to cook him a gourmet meal which he will enjoy with her and their two almost-grown children. The whole thing will be repeated at dinner where another lovingly prepared and described gourmet meal will be consumed. These interludes with the family are another hallmark of this series, one that marks it as different from the usual fictional detective with a dysfunctional personal life.
Leon's unique method of combining observations on culture and society with a thoughtful exploration of crime and justice or lack thereof has been a winning combination for her for almost thirty years now. In Guido Brunetti, she has invented the perfect vehicle for telling these stories. He is humane and likable, with all too human foibles. In other words, he is someone we can identify with and root for. Her plots sometimes, as in this case, take a while to really get going. They tend to meander along for a bit until Guido becomes clearly focused on the problem at hand. But in the end, she manages to bring it all together for a not always satisfying but generally believable conclusion. I would not be surprised if she has at least thirty more of these stories in her.
My rating: 3 of 5 stars
books Donna Leon reading reviews