The Talented Mr. Ripley by Patricia Highsmith: A review 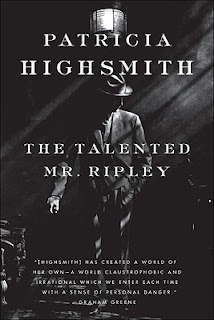 Patricia Highsmith - yet another famous writer that I've never bothered to read even though she's been recommended to me numerous times over the years. Well, time to rectify that omission starting with The Talented Mr. Ripley.
Tom Ripley is a fascinating literary character. His persona has been adopted and adapted by various other writers and filmmakers since he was introduced by his creator in 1955. I confess I haven't seen any of the films either, yet I felt that I knew him even before I picked up this book. The character has long since passed into society's consciousness and his story is well known even by those of us who have not personally encountered him. At this point, a summary of that story seems almost superfluous.
The first thing to be said about Tom is that he is a sociopath. A charming sociopath to be sure but totally cold-blooded and lacking in empathy. He is someone who thinks nothing of committing murder when it suits his purpose. He arrives in Manhattan in the 1950s, a young man who is the product of a broken home and a dismissive and abusive aunt who helped raise him and upon whom he is still somewhat financially dependent. He presents a suave and handsome exterior that helps him to gain entrance to the moneyed set. He becomes friends with one of their members, Dickie Greenleaf. When Dickie, who wants to be a painter, moves to Italy against his father's wishes, the father prevails on Tom to go after him (all expenses paid, of course!) and convince him to return home and enter the family business.
Tom is happy to travel on the Greenleaf dime, but he's not all that eager to persuade Dickie to go home. He likes it in Italy, and he becomes obsessed with Dickie and is jealous of his relationship with an American dilettante named Marge Sherwood. Marge seems to be in love with Dickie but although Dickie likes her as a friend, he is ambivalent, to say the least, about a sexual relationship. Highsmith never straightforwardly addresses Tom's sexuality (or Dickie's) but the clear implication is that he is homosexual. At the time that she was writing, homosexuality was stigmatized and criminalized so perhaps it is not surprising that Tom's sexuality is ambiguous. In the relationships portrayed in the book, he is entirely asexual in his actions.
Highsmith tells the story in third person but the all-knowing narrator is able to give us full entry into Tom's mind. The story is told through him and all the action centers on his personality. We see Europe through his eyes as he travels around the continent. As his obsession with Dickie Greenleaf progresses, it becomes obvious that he wants to be Dickie and the reader can sense that this is not going to end well. At least not for Dickie.
Tom is the character who holds our attention. He is after all the talented Mr. Ripley. Even though we are appalled by his actions, we can't turn away and we can't get enough. Highsmith relates the tale in a propulsive manner that makes it very hard for the reader to disengage. And even after we've finally shut the book for the last time, Tom still lingers there, a smiling louche character who we almost root for in spite of ourselves.
In the event that you are not fully apprised of the story, I don't want to offer any spoilers, but just let me say that the book turns into a taut thriller with characters that almost leap off the page, a plot that engrosses, and an ending that leaves you wanting more. Good thing there are five books in the series.
My rating: 4 of 5 stars
books Patricia Highsmith reading reviews