Whereabouts by Jhumpa Lahiri: A review 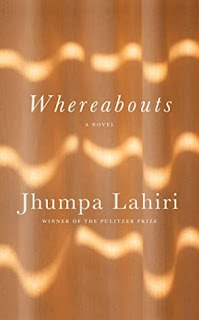 In 2011, Jhumpa Lahiri moved to Rome. Since then she has fully embraced the Italian experience to the extent that she wrote her most recent book in Italian and later translated it into English. It was this English version of Whereabouts that I read and it felt as if the book's original language had been English; I could not discern any clues that it had been translated from another language.
Lahiri presents us with yet another novel with the famous "unnamed narrator." How did this technique ever become so popular with today's writers? It seems to have become de rigueur for writers of a certain type of literary fiction. Sometimes it works and sometimes it doesn't. In the present book, in my opinion, it is mostly successful.
What we know about our unnamed narrator is that she is an Italian woman living in an unnamed Italian town. She is single, in her 40s, and works at a university. Her mother is still living (in another town) and her relationship with her is somewhat problematic, but she visits her on a regular basis. Her father died prematurely and her mother is left alone and lonely. The narrator is alone but she is happy with her life. She is shy and insecure and lives quietly. That suits her. She has friends, both men and women, and she is known in her neighborhood and interacts with her neighbors and acquaintances. She has an ex-lover whom she sees around the neighborhood occasionally and there are some hints that there may be a current love interest but nothing is made explicit.
The book is a character-driven study of this woman's life. It is told in a series of vignettes or essays that often seem unconnected or unrelated to each other but taken altogether they give us a view of this woman as she moves through the seasons of a year of her life. They read almost like nonfiction and could, in fact, be seen as a series of nonfiction essays. We see the woman in various settings around town - at the swimming pool, at the beach, in a bar or restaurant, shopping, or just walking on the sidewalk. The city itself is a character in her story but there is no easily definable plot; it's just an open window on an ordinary woman's life.
As we go through the seasons with her, the narrator reveals more of herself and her thoughts, how she came to be where she is, and where she would like her life to go. But the reader gets the sense that she may not be so sure about any of this herself. She contemplates how one person can ever truly know another, or even how we can be sure that we know ourselves.
Lahiri's writing is lyrical, yet lucid, and it pulls us along, keeps us wanting to turn that next page. The book is deeply introspective, showing a woman at what appears to be a turning point in her life and the ending leads us to believe that she has made a momentous decision that may change that life. This is a nuanced and melancholy depiction but one is left at the end feeling a certain awe at what a talented writer can convey through the vehicle of what is essentially one character. One unnamed character.
My rating: 4 of 5 stars
books Jhumpa Lahiri reading reviews