To the Lighthouse by Virginia Woolf: A review 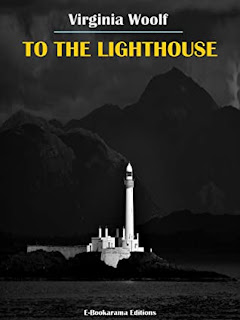 This book is considered Virginia Woolf's masterpiece. It was published in 1927 and has landed on many "best of" lists. For example, in 1998, the Modern Library named it as number fifteen on its 100 best English-language novels of the 20th century. In 2005 Time magazine named it as one of the 100 best novels since 1923. I decided that this would be one of the classics that I read this year.
I had never read any of Virginia Woolf's work and her style of writing took some getting used to. In fact, the writer of the book that I had just read before this one, Rachel Cusk, might have taken her cue from Woolf. Woolf's narrative spends most of its time inside the minds of her characters. We view the events of the novel through the thoughts of its characters. At first, this was a bit distracting and hard to follow for me, but as I got used to the style, I began to enjoy the novel quite a bit.
The novel concerns the Ramsay family, a husband and wife and eight children, and various of their friends and acquaintances. All of the action takes place at the family's seaside summer home. Within view of the house is an island where there is a lighthouse. The youngest child of the family wants to visit the lighthouse and there is debate back and forth as to whether the weather will allow them to do so. It is decided, much to the child's disappointment, that it is not safe on this day.
We visit that family home on two days ten years apart. The first visit is prior to World War I. The second visit is after that war and after much has changed in the family.
At the center of the family is Mrs. Ramsay. When we meet her, she is 50 years old and represents the Victorian ideal of privilege and womanly self-sacrifice. She spends a lot of time knitting and looking out at the lighthouse and thinking. We are privy to her thoughts. The crotchety Mr. Ramsay is a philosopher who is short-tempered and impatient with his children and everyone else. In addition to these two are the eight children and various guests, servants, and hangers-on who fill the summer home.
We meet each of the characters through their thoughts. We learn of their impressions of each other and of their memories of the past as they consider all of this on this one summer day and evening. On this day, two of the house guests become engaged and they all sit down to enjoy a sumptuous dinner. Another of the guests is a young, unmarried woman artist named Lily Briscoe who seems somewhat obsessed with Mrs. Ramsay. While at the dinner she begins to puzzle out how she might complete a painting that she had worked on in the afternoon.
And that is essentially how day number one ends. Ten years pass and during that time the Ramsays do not return to the house on the coast. The house is battered by Nature. The family is battered by life and death. Mrs. Ramsay dies, possibly of influenza. The oldest daughter marries and then within one year she, too, dies of complications of childbirth. The oldest son dies in the war. This middle section of the novel is entitled simply "Time Passes." In her notes about the book, Woolf referenced the "gradual dissolution of everything." The only permanence she found was in Nature. In spite of destructive forces, Nature endures and, she wrote, "every gull, flower, tree, man and woman, and the white earth itself seemed to declare...that good triumphs, happiness prevails, order rules." She portrays the sorrow of the family over its losses as an ongoing process that will be worked out through time. Sorrow endures but the passage of time ameliorates it.
The last section of the novel happens on that day that occurs ten years later. Mr. Ramsay and the two youngest children, now teenagers, return to the seaside home and Lily Briscoe returns with them. At long last, the Ramsays actually make their trip to the lighthouse. Meantime, Lily is still working on that painting she started all those years ago and she's hoping she will now be able to finish it. She is still obsessed with Mrs. Ramsay and "sees" her and feels her presence everywhere on the property.
This book is an evocation of grief and how it disrupts one's perception of time. It is all about perceptions, thoughts, how each character thinks of and relates to the world. Woolf wrote the book nine years after the end of the war that had killed or wounded some 40 million people, and it was seven years after the global influenza pandemic had killed at least that many. Grief was in the very air and Woolf sought to show through the dissolution of this family how society itself had dissolved but also how it might be restored. The book ends on a hopeful note. The irascible Mr. Ramsay has been softened by his sorrow and he treats his two children with more understanding than he had ten years before. He has lost much but is still grateful for the abundance that remains.
In the end then, To the Lighthouse seems like a book meant for our times, even as it evoked the years just prior to when Woolf wrote it. Just like the Ramsays and all who lived in that time, we have lost much yet so much remains for which we can be grateful.
My rating: 4 of 5 stars
books reading reviews Virginia Woolf