Things We Lost to the Water by Eric Nguyen: A review 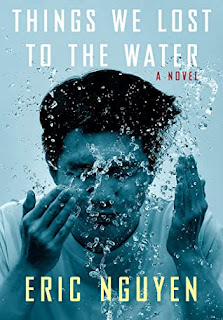 Eric Nguyen's debut novel, Things We Lost to the Water, covers thirty years of a Vietnamese family's history, beginning in the chaos of 1975 in Vietnam when so many were desperate to leave the country in the wake of the Communist takeover and ending in New Orleans in 2005 in the chaos after Hurricane Katrina. The thirty years encompass this family's transition from being strangers in a strange land to being Americans. It is, in a sense, the story of all of us.
Huong and her husband had planned to leave Vietnam with their young son, Tuan, on one of the boats carrying refugees. At the last minute, when Huong and Tuan were already in the boat, her husband could not bring himself to get on board. (His reticence is related to his experience with water which is explained late in the book.) Huong is panicked to leave him behind but must keep her son safe. What she has not told her husband is that she is carrying another child. The pregnant Huong and Tuan survive their terrible boat experience which many of their fellow travelers did not. They are delivered into the refugee system and eventually after Huong has had a second son, Binh, they arrive in New Orleans.
In New Orleans, the priest who is coordinating assistance to Vietnamese refugees places Huong and her sons with a totally inappropriate couple. The man is a former policeman but now a full-time drunk. The wife is already overwhelmed, just trying to hold on. Huong takes her sons and her suitcase and walks away, ending up at a hotel. At this point, she speaks and understands only rudimentary English and one feels her frustration and bewilderment as she tries to make sense of this strange language and city and to keep her children safe and fed. She does find allies in the Vietnamese community and she finds a job in a nail salon. She gets an apartment in a complex populated by immigrants and refugees like herself and she begins to make a home.
In the years after arriving in New Orleans, Huong's heart is still in Vietnam and she writes regularly to her husband at the last address she knows for him, and eventually, she sends tapes of herself and her sons to that address. She never hears back from him until finally, she does get a letter from him telling her not to contact him anymore. She is devastated but does as he asks.
Meanwhile, her sons are growing up. The older one, Tuan, as a teenager gets involved with the Southern Boyz, a local gang of Vietnamese refugees. This does not portend well for his future. Binh, who has never really known any home except New Orleans, adopts the name Ben. He is a bit of a misfit in school and becomes best friends with another misfit, a young Haitian refugee girl. As he grows older, he begins to realize that he is not like the other boys he knows; he is not interested in girls. In fact, he is gay and he leans into that, finding comfort in his queerness.
At the same time the kids are growing up, Huong is growing, too. She takes over as a bookkeeper for the nail salon. When she goes in search of a used car to buy, she meets a salesman named Vinh who advises her. She does buy a car but not from him - from the dealership across the street from his. But she keeps returning to the area and "accidentally" running into Vinh until it becomes clear it is not an accident. He becomes her lover, offering her solace and support and finally becoming the fourth member of her family.
These are tumultuous years for the family. They split apart in spite of Huong's best efforts. Tuan ends up with his own apartment, living with his girlfriend who turns out to be that Haitian girl who was once a friend of his brother. Binh (Ben) ends up in Paris, trying to be a writer. Huong and Vinh continue to live at the apartment with the bayou just at their back door.
And then comes August 29, 2005, and Hurricane Katrina and another desperate struggle to get away from the water to higher ground and safety. In Paris, Ben has nightmares about water.
Nguyen escorts us through all of these years, unerringly conveying the vertigo felt by Huong as she strives to learn a new language and a new way of life. Early in those years, she is torn as she keeps expecting and hoping that her husband will follow her to America and they can become an intact family again. She still thinks of herself as Vietnamese. And then one evening the realization hits her: "It was when they were strolling along the river walk, eating ice cream cones, that she realized this had become her city, the place she lived but also a place that lived in her." Almost without realizing it, she has become American. I can't recall ever having read a book that makes this refugee transformation more illuminating. And Eric Nguyen has done it on his first try. Kudos to him!
My rating: 5 of 5 stars
books Eric Nguyen reading reviews