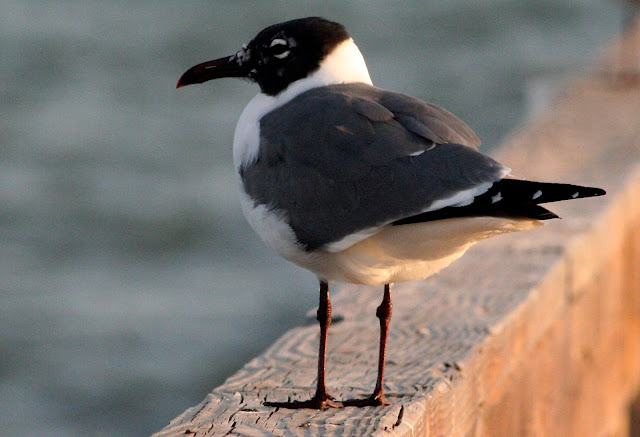 This ubiquitous (on the Texas coast anyway) Laughing Gull is enjoying the late afternoon sun on a Rockport pier.
*~*~*~*

First of all, happy Juneteenth, now a federal holiday. It has been a state holiday in Texas for more than forty years. We are happy to share it with the rest of the country.

It seems to be the zombie that just will not die: A federal judge in Louisiana has ruled that the Biden administration cannot pause new leases for drilling oil and gas on public lands. This includes the Arctic National Wildlife Refuge in Alaska. Global warming be damned! There is no word yet as to whether the decision will be appealed. Congressional Democrats are planning to move forward with legislative efforts to limit drilling on public lands.

As the state swelters in a heatwave, the Electric (un)Reliability Council of Texas has urged customers to conserve energy, turn thermostats up and delay washing and drying clothes or using other energy-gobbling appliances; otherwise, we may suffer blackouts while temperatures range between 95 and 100 degrees F. or above. Not unlike the blackouts we suffered in February when temperatures dipped below 10 degrees F. for days. You could be excused for imagining that our state government might have addressed these issues during the recent legislative session, but you would be wrong, of course. The legislature was much too busy passing bills to further restrict women's right to an abortion and to try to keep all those brown and black citizens from exercising their rights to vote. And, oh yes, restricting how teachers can discuss racism and current events in school.  And there you have my Texas rant of the week.

Interior Secretary Deb Haaland, as expected, is recommending to the president that the Bear Ears national monument and Grand Staircase-Escalante in Utah be restored to their previous size and protection before the previous administration reduced them.

Scientists from NASA and NOAA say that Earth is trapping nearly twice as much heat as it did in 2005. The increase was described as unprecedented and alarming. The study that resulted in this information found that the growth was caused in part by an increase in greenhouse gases and water vapor, as well as decreases in clouds and ice.

In the full budget proposal for fiscal year 2022 that was recently released, the Biden administration has requested increased federal investments that would protect birds, restore habitat, drive energy innovation, and protect communities. The robust funding levels would support bird conservation and climate action.

A dead "murder hornet" has been found in Seattle representing the first confirmed report of the Asian giant hornet in the country this year.

Conservationists in Kenya are mourning the death of this 14-year-old lion that was known as Scarface. He was a well-known and iconic presence on the Mara and had been the top lion of many prides. Conservationists say he died peacefully without being disturbed by vehicles or hyenas.
*~*~*~*

The extreme heatwave in the West is breaking long-standing records in many places. Readings have been 15 to 30 degrees above normal and have brought dangerous conditions of temperatures above 100 degrees to 40 million people.

Tawny Eagles are endemic to much of Africa and South Asia, but their numbers have been reported as decreasing throughout their African range. The cause of their decline is undetermined although changing environmental conditions and poisoning are both likely to have played a role.

Not only is the plastic and other human debris littering our oceans an unsightly and toxic mess, it is also offering a highway for nonnative species to invade and colonize new territories.

Overexploitation and loss of habitat have combined to drastically reduce the population of fishers, a relative of otters, minks, and martens, along the West Coast of the United States. But now the state of Washington is reintroducing the animals in a bid to restore the native carnivore in the ecosystem.

Tidal turbines can harness the power of underwater currents to turn turbine blades and produce clean electricity. A Scottish-based company has launched the world's most powerful tidal turbine that will be tested off the coast of the Orkney Islands.

Severe flooding in Australia has caused many humans to seek higher and drier ground. They are not alone. Arachnids are fleeing to such spaces as well, with the result that some areas are being covered in spider webs.

Coelacanths are giant human-sized, slow-moving fish that have been around for at least 400 million years. They had been thought to be extinct but were found alive and thriving off the coast of South Africa in 1938. Researchers believe that the fish can live for up to 100 years.

The last two northern white rhinos are a mother and daughter living in Kenya. Their father and grandfather, the last male white rhino died in 2018; thus the species is now functionally extinct. Mother and daughter will continue to live out their days in the care of conservationists in a wildlife conservancy in Kenya.

Presenting the first findings of the world's largest-ever expedition to the North Pole, scientists are warning that global warming may have already passed an irreversible tipping point. Arctic ice is retreating faster than ever before and we may have literally passed the point of no return.

Fences can be insurmountable barriers to the migration of animals such as pronghorn antelopes and mule deer in the West. Fences can halt or change their migration routes sometimes to the detriment of the animals. Efforts are underway to require more "wildlife-friendly" fences that will allow animals to pass.

A new species of brittle star has been found off the coast of New Caledonia. The animal has a thorny set of teeth and eight arms. The echinoderm has been described based on the collection of one specimen.

Here's why protecting the Tongass National Forest in Alaska matters.

A new ecolabel will identify freight and cruise companies that take steps to keep their ships from colliding with whales. There are specific rules that companies must follow in order to earn the label. It is hoped that companies will voluntarily sign up and comply with the new program.