The Other Black Girl by Zakiya Dalila Harris: A review 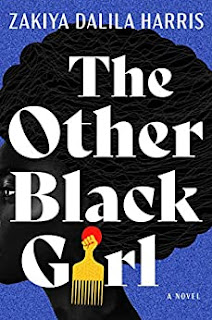 Harris' book begins as a straightforward literary fiction telling of the systemic racism that is inherent in the publishing industry in this country. The protagonist, Nella Rogers, is a young Black woman who works as an editorial assistant to a demanding White woman editor at Wagner Books in Manhattan. Nella is very ambitious and longs to advance to being an editor, but upward mobility seems very limited with her employer. Add to that the fact that Nella is the only Black person employed in the mid- to upper levels of the company; the only other Black employees work in the janitorial or mail departments. Her position seems fraught with expectations as to her "representing" Black people and at the same time, any weakness or perceived error is magnified. A "perceived error" as when Nella speaks frankly in a conference with her editor and one of the firm's most successful writers, an older White man, about the main character in his new book. The character is a Black woman and she is a "collection of tropes...all the unflattering ones." In fact, Shartricia (for that is the name he gives her) is an excellent example of every derogatory stereotype ever imposed on Black women by the dominant White culture. Nella's boss and the author are shocked and angry at her criticism.
So, shortly thereafter, when another young Black woman named Hazel-May McCall is hired as an editorial assistant for another editor, Nella is thrilled. At last, she feels she will have an ally at Wagner Books, someone she can talk with, commiserate with, someone who will understand and relate to her life. Her joy is short-lived, however. Soon, she begins to suspect that Hazel is undercutting her in order to advance herself. Hazel, for example, puts a more positive spin on the book that Nella had criticized, much to the delight of Nella's boss. Hazel's influence grows as Nella seems to fade into the background in spite of all her hard work. And then the threatening notes start appearing.
The notes turn up on Nella's desk or in her portfolio and their basic message is that she should leave Wagner Books now! It is dangerous for her to stay there. Of course, Nella does not report the notes to HR or to the police or to her boss. She does tell her best friend and she tells Hazel. And somehow after that, word does get around to the president of the company who confronts Nella and assures her that she is appreciated and that he has her back. Nella is not pleased that he knows or that he seems quite close with Hazel, who she is beginning to suspect is her enemy and may even be the one leaving the notes.
What had been straightforward literary fiction now becomes a mystery-thriller. The twisty turns keep coming and it begins to take on aspects of the horror genre, sprinkled with more than a little magical realism. And the ending? Well, sci-fi maybe? So which section should this book be filed in? Fortunately, that's a question for librarians and not for me.
Harris is very good at delineating the experience of working in an office in close quarters with other human beings. She gives full rein to the everyday grievances and tensions and she does not even spare us the odors, from stomach-turning food smells to people's farts - it's all here in glorious detail and is, in my opinion, one of the strengths of the book. And, of course, there are the hair odors, particularly cocoa butter, which it seems is a staple of Black hair care. This book contains more about the different types of Black hair and their care than I, frankly, ever knew existed. I knew that Black hair is fragile and requires special care, but that was the extent of my knowledge. I resorted to Google frequently to explain to me what 4A, 4B, 4C, etc. hair types were and how they related to different hairstyles. A Black woman reading this book would probably understand the nuances immediately and feel a connection to the narrative. For the rest of us, all of this was a revelation.
I was less enamored of Harris' genre-bending switching of styles in the book. I found it all a bit disorienting and I generally don't like being disoriented. I like the author to pick a style and stick with it. Overall, the book was saved for me by its sense of humor which seemed to say, "Yes, this is a serious subject, but you don't have to take everything quite so seriously!"
My rating: 4 of 5 stars
books reading reviews Zakiya Dalila Harris