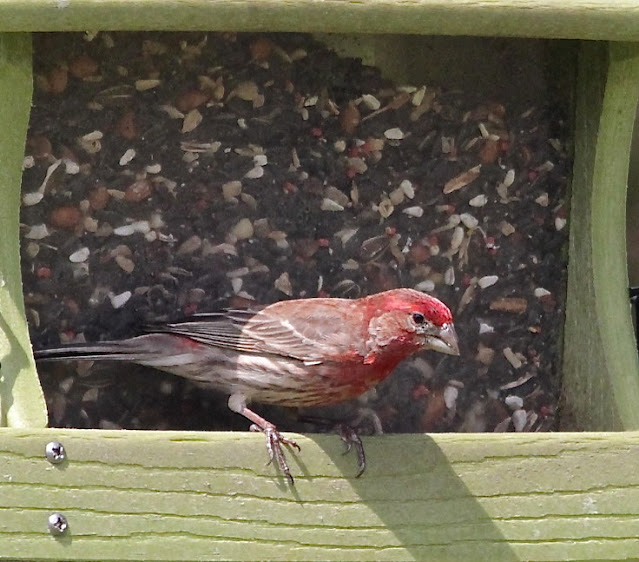 I always enjoy his dulcet songs when I'm out and about in my yard. House Finches are an almost constant presence.
*~*~*~*
One of the biggest environmental stories of the week was the cancellation of the Keystone XL pipeline. The sponsor of the pipeline pulled the plug on it after Canadian officials were unsuccessful in changing President Biden's mind about the project. Environmentalists who had fought the project since it was first announced in 2008 called the cancellation a "landmark moment" in the effort to curb the use of fossil fuels.
*~*~*~*
More good news for the environment: Officials of the Biden administration have moved to reinstate the roadless rule in the Tongass National Forest in Alaska. This revives the 20-year-old protections for the forest that were stripped by the previous administration three months before the end of its term in office.
*~*~*~*
And in more reversals of policies put in place by the previous administration, President Biden moved to undo many of the ways that administration altered the means by which habitats of plants and animals on the verge of extinction are protected and kept from total collapse.
*~*~*~*
Lake Mead is the largest reservoir in the U.S. by volume but it has fallen to historic lows as a result of the devastating drought in the West. It will be at its lowest point since the 1930s when Hoover Dam was built and officials are expecting it to go even lower. The human-made lake is currently at approximately 36% of its capacity.
*~*~*~*
In a 2011 survey by the Fish and Wildlife Service, it was found that 93% of birders were White and only 4% were Black. Black Birders Week was instituted to bring attention to the hobby for those who might feel left out of it. The message is "Birds are here for everyone."
*~*~*~*
How can the world's richer countries best help poor countries deal with the challenges associated with climate change? The G-7 leaders meeting this week acknowledge that adequate climate financing for the most at-risk countries must be a central priority.
*~*~*~*
One of the climate problems facing some of those poor countries is wetter monsoons. Scientists have known for years that climate change is disrupting the monsoon season. Increased moisture in the warmed atmosphere is expected to result in rainier summer monsoon seasons and unpredictable, extreme rainfall events.
*~*~*~*
The desert seems an ideal place for constructing large solar projects to generate clean energy but it is important to plan such projects so that they do not harm rare plants and animals.
*~*~*~* 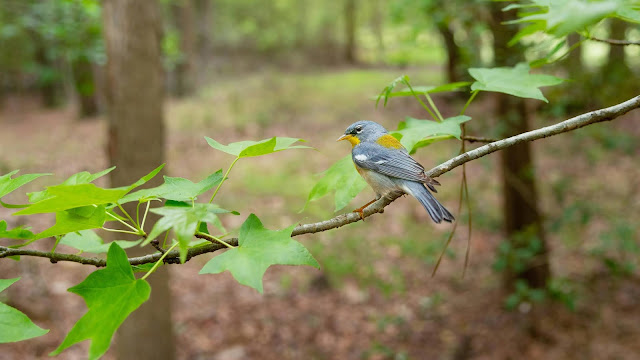 In 2019, Audubon reported that without meaningful action to mitigate the effects of climate change, two-thirds of American bird species like this Northern Parula could be at risk of extinction. Now they have published the Natural Climate Solutions Report that provides a scientific framework for addressing the existential threat.
*~*~*~*
Salmon are facing extinction in the American West and four dams are the prime cause of their plight. But 17 million juvenile Chinook salmon that need to reach the ocean in order to complete their life cycle are getting a helping hand from the state of California. The state is transporting the fish to the ocean in trucks.
*~*~*~*
Microscopic animals called rotifers that were frozen in the Siberian permafrost when woolly mammoths still roamed the planet have been restored to life as though no time had passed. These must surely rate as some of the toughest creatures on the planet.
*~*~*~*
Analysis of the fossil record shows that there was a mysterious mass extinction of sharks some 19 million years ago. The event decimated the diversity of sharks in the world's oceans and they have never fully recovered that diversity.
*~*~*~*
Protection Island, Washington, about two-and-a-half miles off the coast of that state, has one human resident and plenty of wildlife. The human, Marty Bluewater, has a lifetime tenancy on the Protection Island National Wildlife Refuge that has been his home for fifty years.
*~*~*~*
Peacocks that are descendants of a small population that were imported by a wealthy businessman in the late nineteenth century are threatening to overrun Los Angeles County. The birds have flourished in the climate there and are often fed by residents. But now such feeding is being forbidden by ordinance and scofflaws can be fined up to $1000 or sent to jail for six months.
*~*~*~*
In other news from California, the majestic redwoods that were seriously damaged by wildfires last year are showing signs of recovery.
*~*~*~*
Republicans in several states around the country are taking their stand on the side of global warming. They are threatening retaliation against banks that refuse to lend to coal, oil, and gas companies. Apparently, they don't believe in the power of the marketplace after all - at least when it behaves in ways they don't approve of.
*~*~*~*
This story just makes my blood boil! A drone that was being flown illegally over the Bolsa Chica ecological reserve in California crashed on a beach that was the nesting site of Elegant Terns. The frightened terns, believing they were being attacked by a predator, abandoned their nests. Those nests had about 3,000 eggs in them waiting to hatch.
*~*~*~*
The EPA is set to reverse the previous administration's efforts to scale back the number of streams, marshes, and other wetlands that fall under federal protection. The EPA and Army Corps of Engineers will craft a new set of protections for waterways that provide habitats for wildlife and safe drinking water for millions of Americans.
*~*~*~*
The annual count of Red Knots along Delaware Bay beaches has shown another severe drop in the numbers of the birds. It is the steepest decline in years and it threatens the Red Knots' continued survival.
*~*~*~*
Scientists have compiled a detailed database from tens of thousands of hours of observation of African elephant behavior.
*~*~*~* 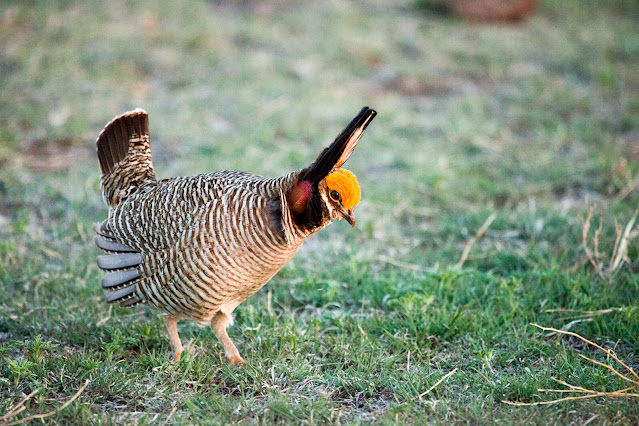 The Lesser Prairie-Chicken will now be protected under the Endangered Species Act according to an announcement from the U.S. Fish and Wildlife Service this week. The bird's range includes parts of five states: Texas, Oklahoma, Kansas, Colorado, and New Mexico.