What's Bred in the Bone by Robertson Davies: A review 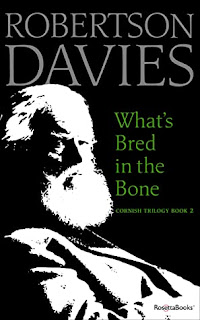 What's Bred in the Bone is actually the second book in a trilogy by Canadian author Robertson Davies, but it was recommended to me as a standalone and indeed it is a book that I had long intended to read. I found that it works perfectly well as a standalone and that it was a very enjoyable read.
Francis Cornish is dead when we first hear of him. We hear of him as three trustees of his estate gather to discuss a biography of Francis that one of them, Simon Darcourt, has been commissioned to write. The other two trustees are Maria Theotoky and Arthur Cornish, Francis's nephew. Maria and Arthur founded the Cornish Foundation, a benevolent body meant to advocate artistic patronage. The biography was the initial work commissioned by the foundation, but Darcourt reports that there is a problem; he has been able to uncover too few facts of Cornish's life to write a comprehensive biography of him, but what he has discovered leads him to suspect that there was much more to that life that he has been unable to track down. He is stymied in his research and does not know how to proceed.
And that might be the end of it but fortunately for the reader, there are two supernatural beings hovering over the scene. The beings are a minor angel of biography called the Lesser Zadkiel and Francis's own personal daimon called Maimas who guided and watched over him throughout his life. These two know all about Francis Cornish's life and they are ready to dish.
From them, we learn all about his beginnings and the opposite elements that shaped his childhood and were the source of the dichotomies that were evident throughout his adult life. His father was a Protestant from a distinguished family in Cornwall, England. His mother was from a devout French Canadian Catholic family that became rich and powerful through the timber industry. The values represented by these two families warred for supremacy in the adult Francis. (It is possible, as I read in researching this book, that Davies also meant this contrast as an emblem of the forces that contest for ascendancy in the Canadian national identity.)
Francis was born in the remote Canadian hamlet of Blairlogie, a "jumping off point" as it was called. He later was educated in Toronto and then Oxford. While he was at Oxford, things were beginning to heat up again in Europe. This was in the '20s and '30s but Francis was essentially oblivious to politics; he was consumed with a passion for art.
He had a talent for drawing and he came to the attention of an artist and art restorer/forger. After Oxford, he went to Italy with this artist and served a kind of apprenticeship with him for several years. During this time, he learned to create art in the manner of old masters of 16th-century painting. He learned so well that a couple of his works passed inspection by art experts and were believed by them to be actual works from that period. But that was much later.
Francis became an undercover agent and aided the allies in World War II. He fell in love with a woman who also served in such a capacity and he lost her - the only woman he would ever truly love - in the bombing of London. He helped to save artworks from the grasp of the Nazis and after the war, he helped to authenticate artworks and ensure they were returned to their rightful owners where possible. As a result of his work, his international renown as an art expert grew. Once back in Canada to handle his family's estates, he began his extraordinary collection of art and campaigned for the museums of the country to obtain top-quality works.
Throughout Cornish's life, he was strongly influenced by his associations in Blairlogie, particularly that of Zadok Hoyle, an embalmer/bootlegger who helped to show Francis the beauty of the human body and to instill a reverence for it. It was in watching Zadok at work that Francis learned to draw the human body. The strongest parts of Davies's book for me were in these descriptions of his protagonist's early life and influences. After he got out of Blairlogie, in the middle part of the book, the narrative became quite wordy and the action slowed as there are long conversations where my eyes glazed over just a bit. In the latter part of the book, the action picks up again and carries us to a satisfying conclusion.
I saw one description of Davies's writing of this book as part Trollope, part Samuel Johnson, and part Nabokov. That's quite a combination and I would say that it is not inaccurate. The book is an impressive expression of the author's views on life and art, and in Francis Cornish, he has created a memorable character who embodies and explicates these views. Francis is compelling in the variety and pathos of his life, even as much of that life remained hidden from the view of the world. I pity Simon Darcourt in trying to capture it without the aid of the angel and the daimon.
My rating: 4 of 5 stars
books reading reviews Robertson Davies