A World on the Wing: The Global Odyssey of Migratory Birds by Scott Weidensaul: A review 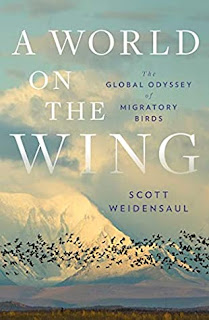 My favorite of all the books that I read in 2020 was Migrations by Charlotte McConaghy. It was a novel about the amazing migratory flight of the Arctic Tern and of one woman's obsession with it. Scott Weidensaul's book is the nonfiction version of that and many other birds' migration stories and of the scientists and dedicated amateurs who track and study those migrations to better understand and protect the birds. Weidensaul is a naturalist and an active field researcher himself and he also offers his commentary and insights. We know that the numbers of songbirds, shorebirds, waterfowl, and raptors have all plummeted in recent years. The study of their migrations offers some clues as to why this is happening.
Studying bird migration also offers us a panoply of almost miraculous stories. There are the tiny Ruby-throated Hummingbirds that cross the Gulf of Mexico in a single nonstop flight. Then there are Whimbrels that nest in the Canadian Arctic and in the fall travel east for the width of the continent before flying into the North Atlantic, straight into the violent winds of seasonal storms. It turns out that Whimbrels know what they are doing; the winds give them a boost for their nonstop transoceanic flight from the Canadian Maritime Provinces to Brazil where they spend the winter.
In addition to the actual flight, there are equally amazing preparations for flight. In getting ready for their flights, birds pack on the fat. If they were human, they'd be termed morbidly obese and yet they do not suffer the negative effects of such obesity. They are also able to add muscle where they need it and during the long flights, the birds can actually cannibalize their own organs to provide the sustenance they need. Many species arrive at their destination with their organs shriveled and they need to feed immediately to restore them. And then, of course, there are their remarkable eyes that contain electrons that allow them to "see" Earth's magnetic fields which they can use as navigation aids. Weidensaul is able to relay all of these incredible facts in a manner that is accessible for the layperson but in no way shortchanges the science.
The writer spends a considerable amount of time explaining the advances in technology that have enhanced the capability of scientists to track the birds every mile of the way on their flights. There are ever-more-sophisticated miniaturized tracking devices that can be attached to the birds (even tiny hummingbirds) without interfering with their ability to fly and these allow the scientists to see not only where the birds end up but also where they stop along the way. Protecting those layover sites where the birds stop to rest and feed becomes one of the most essential parts of safeguarding migratory routes. One of those sites is the Yellow Sea, an expanse along the Chinese coast that provides a banquet for millions of migrating shorebirds each year, including some that are critically endangered. It is absolutely essential to the continued survival of these birds that this area be protected.
Sensitive readers should be forewarned that parts of this book make for difficult reading. The obstacles faced by the migrating birds on their routes are many and varied and most of them are human-made. For example, songbirds migrating from Africa across southern Europe must evade those humans who consider them delicacies for their cooking pots. Some of the methods that these people use to capture the birds they want to eat are particularly cruel.
But in contrast to these horror stories, there are also some heartening tales of humans working to ease the way of the migrants. In one such instance, conservationists came up with a plan to pay the rice farmers of California's Central Valley to flood their rice fields during the times when wetland birds would be arriving in the area to provide appropriate habitat for them. The plan has worked brilliantly benefiting both the birds and the farmers. A World on the Wing presents such stories as a way that conservation can be a win-win for both birds and humans.
Weidensaul is a passionate advocate for the birds and he seeks to inspire his readers to take up the battle to staunch the flow of losses that threatens to deprive future generations of the joy of birds. We cannot bring back the three billion birds that have vanished from North America over the last thirty years, but if we can stop or slow those losses, then we can trust birds to find a way to survive and regenerate. They have outlived the other dinosaurs; they are nothing if not adaptable. Given half a chance they will outlive us as well.
My rating: 4 of 5 stars
books reading reviews Scott Weidensaul