Earthlings by Sayaka Murata: A review 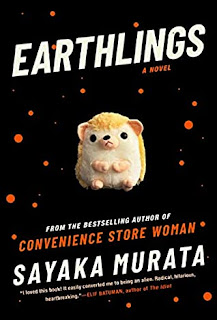 I frankly don't have a clue how to sum up this strange little book or how to rate it. I was fully on board with the plot for about three-quarters of the book and completely sympathetic to the protagonist, Natsuki. Then in the last quarter, the plot really began to go off the rails for me. No spoilers here but I found the ending to be a bridge too far and the writer lost me with it.
But first, let's concentrate on the positive three-quarters.
Natsuki is nine years old when we meet her and she is a complete misfit. She has an older sister who is the favorite of her parents, especially her mother. The mother is psychologically, emotionally, and physically abusive to Natsuki. The child cannot do anything right in her eyes. The father seems to be a bit of a cipher. He really doesn't take much interest in his children. He certainly does not defend Natsuki.
Natsuki's "best friend" is a plush toy hedgehog that she imagines comes from a far planet with an unpronounceable name. She holds conversations with her hedgehog and he assures her that she has magical powers.
Every year the extended family gathers in the mountains at the home of Natsuki's grandparents during the holidays. There, Natsuki plays with her cousin, Yuu, who is also emotionally traumatized by his mother. (His father is absent.) These two abused children bond. Yuu confesses that he is from that same far planet that the hedgehog hails from and Natsuki decides that she probably is, too. The two 9-year-olds make a secret pact to eventually get married and, in the meantime, to do whatever is necessary to survive.
The idyll in the mountains ends and Natsuki's family returns to their everyday life, which for her means going to school. There, the horror of her life multiplies when she is sexually assaulted by her teacher. When the assaults begin, she cannot tell anyone, but sometime later she tries to tell her mother with predictable results. The mother accuses her of lying and describes the teacher as a paragon of virtue. The assaults continue.
During the next family vacation in the mountains, she convinces Yuu that they should have sex. The two prepubescents are caught in the act and punished. The two do not see each other again until they are adults.
As an adult, Natsuki enters into an empty, contractual marriage with an asexual man named Tomoya, who also comes from an unloving family. By so doing, she at least gets out of the home with her cruel mother. She and Tomoya live as roommates in a spacious apartment. They feel that they have escaped the clutches of their hateful families and of a repressive society that expects them to be part of the "Baby Factory." They deny their sexuality and live in their own fantasy. Natsuki still believes herself to be an alien.
Meanwhile, Yuu is now living in that mountain home where their misadventure took place all those years ago. Tomoya is entranced with stories of Natsuki's vacations there and he wants to visit. The two do go to visit Yuu and the platonic duo becomes a platonic trio and things begin to get very, very complicated and weird.
Earthlings at its core is essentially about the effects of child abuse on the adults that these children become. All three arguably suffer from PTSD and struggle mightily to construct a world in which they can feel safe and secure. If that world is a fantasy based on their being aliens from outer space, then so what? If it works, it works. Murata tells their stories in a kind of flat, expressionless prose that reminds one almost of anthropological texts. She might be Margaret Mead writing about the traditional cultures of the South Pacific. And so she is able to report about child abuse, rape, incest, murder, and cannibalism as a disinterested observer. Unfortunately, I can't really disengage that completely. I have opinions and biases and they interfered with my enjoyment of the last quarter of this book. But I have to admit that Murata is an imaginative writer with a fertile imagination. That imagination encompasses a rather dark view of humankind.
My rating: 3 of 5 stars
books reading reviews Sayaka Murata