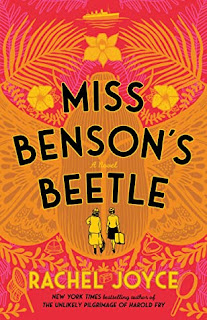 I cannot recall the last book that gave me such uncomplicated joy in reading it as Miss Benson's Beetle did. This story of two utterly mismatched English women and their hazardous trip to New Caledonia to search for a golden beetle that has never been found by science hit all the right spots for me. It was well-written. The scientific research necessary to provide all the information about beetles as well as other things was quite impressive. The story was told with a lot of laugh-out-loud humor. The plot was well-constructed to keep those pages turning. And perhaps most importantly, the characters were well-developed and were people the reader could believe in and like. I had not read anything by Rachel Joyce before, but I will be looking for her name on works in the future.
The story begins in 1914 in London. World War I is underway and Margery Benson's four older brothers have joined the army and are fighting in France. Ten-year-old Margery is left at home with her parents. On this particular day, Margery is enjoying some time and attention from her beloved father. He is showing her a book called Incredible Creatures that contains illustrations of animals that may or may not exist. Margery is entranced.
She is particularly captivated by a creature called the golden beetle. Her father explains that it is believed to be endemic to the wilds of New Caledonia but no one has ever collected one for scientists to view and study, so as far as science is concerned, it doesn't exist. Margery immediately wishes that she and her father could travel to New Caledonia and find the beetle.
While they are looking at the illustration of the beetle, there is a knock on the door and the father goes to answer it. The visitor gives him the devastating news that all his sons have been killed in battle. Mr. Benson returns to the room and takes something from his desk. He walks out on the terrace, leaving Margery with the book, and he shoots himself, committing suicide. In one day, Margery has lost all of her family except her mother, and soon, without her father, they will lose their home. She and her mother move in with two of her aunts and it is in the uncompromising atmosphere of their home that Margery grows up.
Fast forward thirty-plus years. It is 1950 and England is still recovering from the latest world war. Privation still rules the day. Margery is a 40-something ill-dressed spinster teacher, a walking stereotype. Her students make fun of her and her fellow teachers find her an object of abuse or pity. Margery is quite miserable and one day something happens that tips her over the edge. She quits her loathsome job and makes plans to go to New Caledonia to search for her golden beetle.
Margery gathers all of her meager financial resources and then advertises for an assistant to accompany her. She receives four responses. One respondent takes herself out of the running; a second one is a former prisoner of war in Burma who is so damaged that he seems incapable of coherence. A third respondent's reply borders on the illiterate and Margery does not deign to reply to her. Fortunately, the fourth applicant is acceptable and Margery hires her. Everything seems set, but then practically on the eve of sailing, her assistant quits, leaving her in the lurch. In desperation, Margery contacts her "illiterate" applicant and arranges to meet her. Enter Enid Pretty.
Enid is the exact opposite of Margery. She is petite where Margery is tall. She is a flashy dresser who is never seen without her makeup, while Margery is a frumpy dresser who is a stranger to makeup. Margery is a planner who makes lists; Enid is utterly spontaneous and responds in the moment. She enjoys engaging with people, while Margery would prefer to ignore them as much as possible. This does not seem to be a partnership that will flourish, but together they begin their long journey to New Caledonia.
As Joyce writes regarding Margery: "It was so easy to find yourself doing the things in life you weren't passionate about, to stick with them even when you didn't want them and they hurt. But now the time for dreaming and wishing was over, and she was going. She was traveling to the other side of the world. It was not just the ship that had been unmoored. It was her entire sense of herself."
And so we travel with Margery and Enid on their long voyage and then into the interior of New Caledonia. The adventures that they have along the way are sometimes uproariously funny and sometimes heartrending but through it all, almost without noticing, the two are bonding and becoming friends.
"The truest friendships are those that allow us to step out of the confines of what we once were, and to realize instead what we might be."

Rachel Joyce has written a gloriously offbeat bit of historical fiction featuring two characters who have been damaged by what happened to them in the past and who are healed and made whole by their friendship. The secondary characters are rendered with equal care. In spite of the fact that he becomes a stalker of Margery and causes almost unbearable damage, it is impossible not to feel empathy for that former P.O.W. Even the obnoxious and bitchy Mrs. Pope, the consul's wife, is given personality and depth. Joyce obviously takes great care with her characterizations and it is a strong point of this novel. Moreover, her plot offers real insight into the lives of women in this period, the lingering tragedy of war, and the power of simply continuing to put one foot in front of the other and take care of daily things. As Margery realizes at one point: "There was always darkness and in this darkness was unspeakable suffering, and yet there were also the daily things - there was even the search for a gold beetle - and while they could not cancel the appalling horror, they were as real."

That is a perception that could just as well apply to our time.