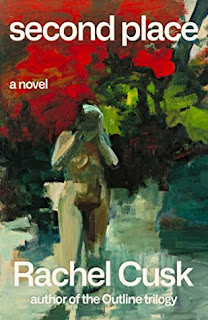 There's a lot that feels familiar in Rachel Cusk's latest book. Just like in the Outline trilogy (all three of which I loved - Outline, Transit, and Kudos), we have the unnamed narrator who is the conduit for all information about the other characters and about the action of the novel. But in Second Place, our relationship with the narrator is more intimate. We know a bit more about her history and her emotions.
We know, for example, that she had an unfortunate first marriage that resulted in a daughter. A daughter for whom she has always had difficulty expressing her love and whose present relationship with her now 21-year-old daughter is a bit problematic. We know that she got a second chance and now has a more successful marriage with a man who seems like a paragon among husbands. We know that she and her husband live in an idyllic setting on a marshland. We know that the land belonged to her husband's family historically and we know that in clearing part of the land, they found an abandoned cabin which they restored and turned into a guest house. This became their "Second Place."
Our narrator, who has a sincere interest in all things arty, has from time to time invited various artists to come and stay in the Second Place for extended periods. When we meet her, she has been on a trip to Paris and has seen an exhibit of paintings by an artist referred to only as L. She is enchanted by the paintings and subsequently contacts L and invites him to come and stay in her cabin and paint the marshland. After various delays and back-and-forth communication, L accepts the invitation. But when he arrives, the narrator is nonplussed to discover that he has brought a beautiful young woman name Brett with him. The narrator immediately resents her.
All of this is relayed by the narrator to someone called Jeffers. We have no frame of reference for Jeffers. We don't know who he or she is or how he or she relates to the narrator. Is Jeffers a therapist perhaps? A random acquaintance or friend? But our narrator doesn't seem to have friends so a therapist seems more likely. Jeffers never speaks so we have no idea what his/her response to the narrator's recital of events and conversations might be. His/her sole purpose seems to be as a listener, a role analogous to our own as readers. In fact, Jeffers serves as a stand-in for the reader.
Our narrator feels a strong need to be in control, and Brett's addition to the mix throws her for a loop. She complains to Jeffers, "It wasn't at all how I'd planned it! I feared, suddenly, that my belief in the life I was living wouldn't hold, and that all I'd built up would collapse underneath me and I'd be unhappy again." This is a woman who needs things to go exactly according to her scheme and who feels that any alteration to that scheme may cause everything to fall to pieces around her. She feels even more betrayed when her daughter, who along with her boyfriend is now staying with her and her husband, becomes friends with Brett and spends a lot of time with her.
It's never entirely clear to us or, it seems, to the narrator exactly what she wants from L. Does she desire a romantic liaison? Or something decidedly more esoteric? We learn that she wants L to paint her. She is disappointed when he only seems to be interested in painting her husband. But when he does finally agree to paint her, the whole enterprise ends in disaster. The painter seems to actually hate the narrator and she, in turn, suffers a dichotomy of feelings for him. She both loves and loathes him. She sees him as the epitome of arrogant male dominance. He feels entitled to everything simply because of who he is.
At this point, we can clearly see the pun in the title of the book; the guest house is the Second Place but the narrator always feels herself to be in second place, not quite good enough. It is revealing that after her daughter's failed relationship with the boyfriend, the narrator tells her that she "will always be able to find a white man to be obliterated by, if that was what she wanted."
Those who require a lot of action in the novels they choose to read would be disappointed with a Rachel Cusk novel. The narrative ambles along, seducing us with its ordinariness. We see a woman with certain preoccupations and failings, as well as certain privileges and assumptions and we may start to feel superior until we are brought up short realizing that we have our own ingrained set of preoccupations, failings, privileges, and assumptions. We are not so different from our anonymous narrator. That is really the genius of Cusk's writing. These meandering one-sided "conversations" have a way of revealing us to ourselves. It comes as a shock but as the narrator says at one point, "shock is sometimes necessary for without it we would drift into entropy."
There is no entropy in a Cusk novel. She always has a well-planned point in mind.
My rating: 4 of 5 stars
books Rachel Cusk reading reviews