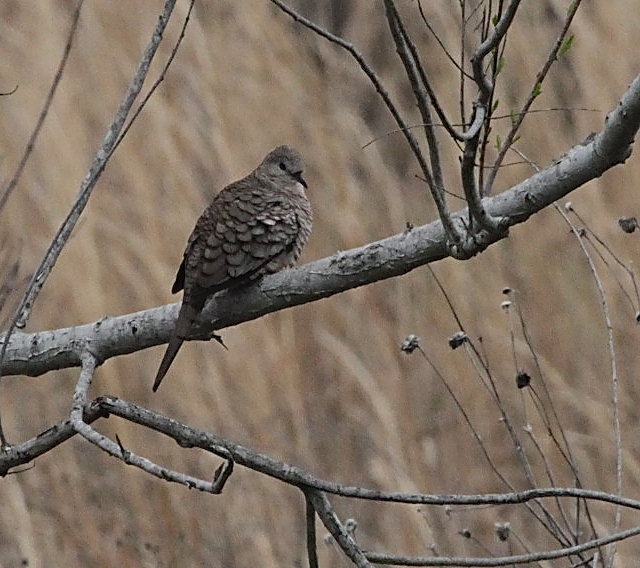 An Inca Dove hangs out on a bare limb at Aransas National Wildlife Refuge on the Texas coast.
*~*~*~*
As expected, the Biden administration has suspended oil and gas drilling leases in the Arctic National Wildlife Refuge in Alaska, the largest tract of undeveloped wilderness in the United States. The formal order from Interior Secretary Deb Haaland paused the leases until her agency has completed an environmental analysis of their impact and a legal review of the Trump administration’s decision to grant them. This opens a process that could permanently halt drilling there.
*~*~*~*
Florida's Everglades have been in trouble for years due to agricultural pollution, saltwater intrusion, and rampant real estate development. The subtropical preserve may be doomed to extinction unless we find the means and the will to save it. Perhaps help is on the way from both the state and federal government.
*~*~*~* 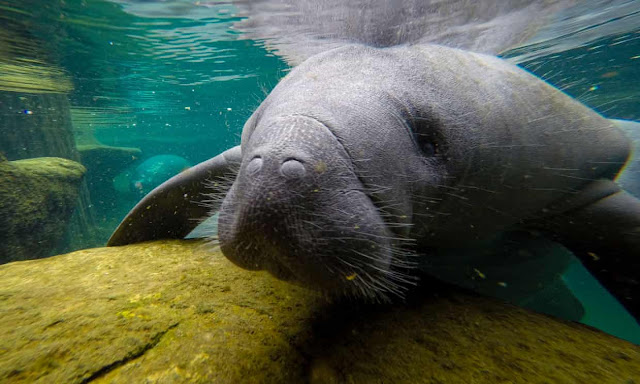 Here's another Florida treasure in desperate need of help. The death rate among manatees this year has been appalling. The current death toll of 749 is on course to surpass the previous record in 2018. The deaths are attributed at least in part to agricultural pollution that has encouraged algal blooms that contaminate and destroy manatees' food sources.
*~*~*~*
Over a third of common French bird species are in decline, including the European Goldfinch, the European Turtle Dove, the Common House Martin, and 40 others. From city centers to rural fields, human activity has decimated populations of France's most common bird species, scientists warned this week, citing data collected over 30 years by volunteer ornithologists.
*~*~*~*
Here's a mystery for you: A herd of fifteen Asian elephants is marching across Yunnan province in southwestern China and no one seems to know why. Maybe they are lost or looking for better food or maybe they are just off to see the world. In the past year, they have traveled about 300 miles.
*~*~*~*
And speaking of elephants, their defining appendage, the trunk, is truly amazing in the things it can do. It is incredibly versatile.
*~*~*~*
Miami is the American city most vulnerable to the rise in sea level, but there is a proposal that might help to protect it. The U.S. Army Corps of Engineers has recommended the building of a 20-foot high sea wall to protect the city, but there is resistance to the idea.
*~*~*~*
The World Wildlife Fund reports that penguins, puffins, and many other key species will be at risk if the planet is allowed to heat up by more than 1.5 degrees Centigrade. Such an increase would cause habitat loss and food insecurity to proliferate.
*~*~*~*
One at-risk species will be getting an assist in California. A coalition of conservation groups along with the California Department of Fish and Wildlife and the environmentalist organization River Partners will be working to plant 30,000 milkweed plants across the state to extend a lifeline to that state's dwindling Monarch butterfly population.
*~*~*~*
At many places across the country, wildlife is getting its own special "highway" to allow the animals to cross busy highways safely.
*~*~*~*
A study evaluating the intelligence of Eurasian Jays has proved that the brainy birds are very difficult to fool.
*~*~*~*
A plague of mice is ravaging parts of Australia, devouring crops, gnawing through electrical lines and appliances, even biting people. This represents a heavy blow for many farming communities that have already been devastated by a series of natural disasters in recent years.
*~*~*~*
The Tasmanian devil has been long extirpated on the Australian mainland but it is being reintroduced. Conservationists recently discovered seven tiny baby devils in the pouch of their mother, representing the first devils to be born in the wild on mainland Australia in 3,000 years. This is a hopeful sign but the odds still seem to be stacked against them.
*~*~*~*
National Park Service scientists have found that the Castle fire in California in 2020 devastated the state's population of ancient trees. They estimate that as many as one-tenth of the world's population of giant sequoias may have been destroyed by the fire.
*~*~*~*
A tiger poacher who had been wanted for twenty years has finally been arrested by Bangladeshi police. The poacher known as Tiger Habib is believed to have killed as many as 70 endangered Bengal tigers in more than two decades.
*~*~*~* 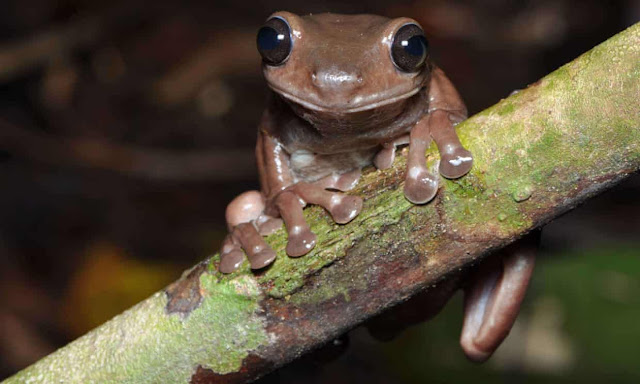 This cute little fella is called the "chocolate frog," species name Litoria mira. It was discovered in the New Guinea swamps by an Australian scientist. It has been given status as a separate species even though it looks very much like the Australian green tree frog, except for its color. It is that frog's closest known relative.
*~*~*~*
An indigenous-led resistance movement is raising the alarm about yet another tar sands pipeline from Canada that would cut through treaty territory of the Anishinaabe people, threatening wild rice, fresh water, and the climate. Activists are hoping that the Biden administration will put a stop to the pipeline.
*~*~*~*
There is outrage and anger in the town of Mead, Nebraska since environmental regulators have been forced to admit that under their oversight an ethanol plant that moved to the area ten years ago has been contaminating the area with an array of pesticides at levels much higher than what is considered safe.
*~*~*~*
A recently released study reports that more than a third of all deaths related to heat can be attributed to the additional warming related to climate change.
*~*~*~*
California's governor has declared an emergency in 41 of 58 counties as water shortages and dry conditions as a result of drought are already affecting the state.
*~*~*~*
Who are the biggest emitters of methane? There are some surprising names on the list. According to a new analysis of the latest emissions data disclosed to the Environmental Protection Agency, five of the industry’s top ten emitters of the particularly potent planet-warming gas are little-known oil and gas producers, some backed by obscure investment firms, whose environmental footprints are extremely large relative to their production.
*~*~*~*
Biologists studying the southern California bobcats have found a mother and three kittens in an unusual den - the cavity of a tree that was severely burned by a 2028 wildfire. Dens in trees are not the norm for the animals. Their dens are generally in out of the way, well-hidden places on the ground. 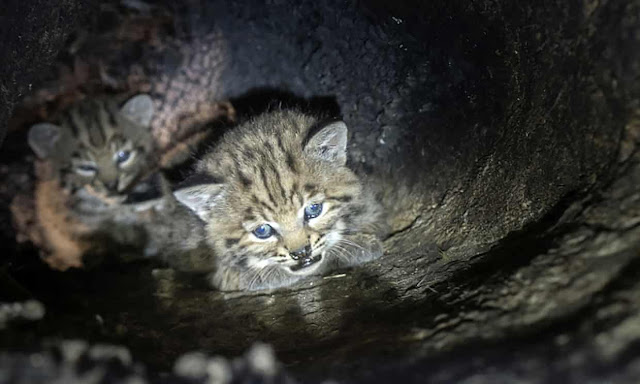 One of the kittens surveys the world from its home in a large oak tree.