A Murder of Quality by John le Carré: A review 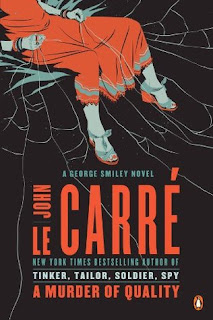 One of my reading goals for this year was to reread all of John le Carré's George Smiley books. I read the first one, Call for the Dead, back in January, and now here it is October and I'm finally getting around to the second one. Yes, I did get a bit distracted along the way.
This second one references boarding schools which, in a foreword, the author states that he was sent to from age five to sixteen. He hated them and something of that sentiment comes through in the book which finds Smiley being prevailed upon to help investigate what turns out to be a murder of the wife of an instructor at such a school, a sort of posh prep school. He becomes involved when he receives a request from a former wartime colleague. The woman, Ailsa Brimley, is now the editor of a publication called the "Christian Voice" and she has received a note from one of her long-time and valued subscribers who tells her that she is afraid her husband is going to kill her. Unwilling to go to the police with such sketchy information, Miss Brimley calls Smiley, and since he is at loose ends he accedes to her request and travels to the city of Carne. Unfortunately, he arrives too late. The woman had been killed the night before.
Since he arrived too late, Smiley feels an obligation to find out what happened and secure justice for the murdered woman. Thus, in this book, we get not Smiley, the spy, but Smiley, the investigator. He teams with the police to try to discover the murderer. It develops that there is no shortage of suspects. Could it be a jealous wife, one of the tutors at the private school, or a possessed lady? Or maybe it really was the husband.
As an investigator, Smiley gets to use some of the same skills that he employed as a spy. He is a careful observer, a student of human nature, and he is not easily fooled. The author leads us through the process that Smiley takes to solve this heinous crime and the reader, along with Smiley, soon begins to get an idea of just who the killer is. Even though I felt pretty confident early on just who that killer was, it was fascinating to watch Smiley work as he followed the clues to their inevitable conclusion.
Reading John le Carré is such a pleasure. Each individual sentence has such crispness and it seems that not one could be removed from the book without changing its meaning. Here, for example, is a description of Smiley which left me feeling that I understood his soul: “It was a peculiarity of Smiley's character that throughout the whole of his clandestine work he had never managed to reconcile the means to the end. A stringent critic of his own motives, he had discovered after long observation that he tended to be less a creature of intellect than his tastes and habits might suggest; once in the war he had been described by his superiors as possessing the cunning of Satan and the conscience of a virgin, which seemed to him not wholly unjust.”
And then there is Smiley's assertion that one must take the facts just as they are without embellishing them: “A fact, once logically arrived at, should not be extended beyond its natural significance.” That's advice from which we all might benefit.
The characters, the plot, and the pacing in this book are just about perfect. Le Carré really was one of the best writers of the twentieth and early twenty-first centuries of not just genre espionage novels but novels period. How lucky we readers are to have had him.
My rating: 5 of 5 stars
books John le Carre' reading reviews