The Final Revival of Opal & Nev by Dawnie Walton: A review 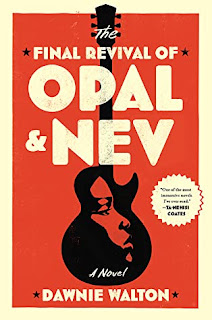 SarahLena (after Sarah Vaughn and Lena Horne), now called S. Sunny Shelton, has just been appointed as the first-ever Black editor of "Aural," a fictional print magazine that is struggling to survive in the world of the internet. The magazine has an illustrious past but its future is tenuous at best. In her new position, Sunny has the opportunity to investigate a news story that is very personal for her. She eagerly takes it on.
Back during the golden age of rock music and the dawn of the civil rights movement, Sunny's father, a talented drummer, played with a singer called Opal Jewel and a guitarist called Neville Charles. During a musical showcase in which they were performing in 1971, the whole thing became a melee that descended into a race riot that was later dubbed "Altamont East" by the media. At the height of the riot, Sunny's father was beaten to death. The partnership of Opal and Nev deteriorated after that experience. Opal was blamed by many for instigating the riot. Her career never recovered. But in the present day, the rumor is that Opal and Nev are reuniting for one last performance. Sunny seeks to interview them to create a kind of written "rockumentary" that will allow her to learn more about what happened on the night her father was killed and also to learn if the rumors of his intimate relationship with Opal are true.
Dawnie Walton has constructed her novel as that written rockumentary. We get Sunny's interviews with Opal and with Nev as well as other people who were involved with the group or who were present at the musical showcase on the fatal night. It is a brilliant strategy for presenting the story. It brings us back to a time when great numbers of people were able to routinely clump together for artistic performances and to a time when such gatherings were recorded by photographers with cameras that used film. It conveys the exhilaration of such gatherings, as well as the relative innocence of that time. We get to know Opal and Nev through their own words as they explain themselves to Sunny.
We learn of Opal's background growing up with a sister, Pearl, who had the voice of an angel but was only interested in using it for the glory of God. From the beginning, Opal was more interested in the entertainment business. Even though her voice was less pure than Pearl's, she was determined to make a career as a rock singer. She had some challenges to overcome in regard to her appearance. She was tall and skinny and she suffered from alopecia which left her with very little hair. With the help of her stylist and best friend, Virgil LaFleur, she was able to transform those "problems" into assets. Unfortunately, Virgil could not so easily help her with the misogyny and racial prejudice that she faced in the rock music business at the time.
Along came Neville Charles from Birmingham, England. Pearl and Opal had come of age in Birmingham, Alabama so, in a sense, this is a tale of two Birminghams. Nev was a ginger-haired guitarist who wanted a Black female singer to balance his act in America. Opal seemed to fit his needs in that regard. They developed a somewhat prickly relationship that was professional but may also have devolved into something more personal. Together they created an album called "Polychrome" that drew a devoted cult following of fans who called themselves Mercurials. Although they never reached superstar status, their fans were intense and devout.
I really liked this book. The narrative was propulsive and very hard to put down. Walton has given us not just the interviews but also lyrics and liner notes that seem straight out of that era for those of us who remember it. They often relate to the political issues of the day and that helps to make the story real. There are moments of despair and grief but also quite a lot of humor. I found myself often smiling in recognition as I read the book and once I turned the last page, I found it had given me quite a lot to think about. As is often the case with the best of fiction, this story felt very true to life.
My rating: 5 of 5 stars
books Dawnie Walton reading reviews