Matrix by Lauren Groff: A review 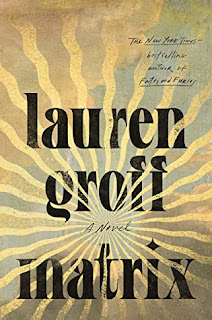 This is the fourth Lauren Groff book I've read and I've loved them all. I love the subtlety of her writing, the way that she builds her characters, and the feminist vibe of the writing. In her acclaimed Fates and Furies, she gave us a dissection of a modern marriage as seen from the two points of view of those in the marriage. In this new book, she delineates the life of a 12th-century poet named Marie de France about whose actual life very little is known. This leaves the writer free to imagine it without worrying about historical accuracy. The result makes for fascinating reading.
The Marie that she gives us is, in 1158, a member of the court of Queen Eleanor, history's Eleanor of Aquitaine who in her life was the queen of both France and then England. Marie was an awkward and unwelcome member of the court. She was extremely tall and had a giant bony body. She was too unattractive to ever be considered for a marriage, so what to do with her? She was educated and had had to fend for herself since she was twelve years old and her mother died, so she was resourceful and well able to manage an estate. Eleanor reasoned that if she could manage an estate, she could just as easily run a nunnery and as it happened she had just such a place in mind.
The particular nunnery that needed someone to take it in hand was a "dark and strange and piteous place, a place to inspire fear." Marie was seventeen years old and had already discarded the religion in which she was raised. She could not accept the paternalism of that religion. She did not wish to leave the court because she harbored an unrequited love for Eleanor and could not bear the thought of being separated from her, but she wasn't given a choice. So off to the nunnery she goes.
What she finds there would be enough to make anyone quail. It was a community of sick and starving women who had no resources to feed or cure themselves. Marie used some of her own money to buy food and then to buy animals who would later provide more food. She organized the women who were able to do so to plant and care for gardens that would provide food as well as medicinal herbs. Gradually, she was able to transform the failing community into a sprawling and successful complex tucked away in the Arthurian forest. She had been filled with self-pity when she first came to the nunnery but she soon began to realize that she had a unique opportunity with the real estate and the women who could be organized to work the land. She could make this into a successful enterprise.
She created a scriptorium to provide copying services at a fraction of what the monasteries charged, and the nunnery began to flourish. Through the long years of Marie's life, it achieves ever greater success and renown as she continues to ignore the paternalism of the church and to pursue her own feminist philosophy. This sometimes causes concern for the nuns as Marie takes on priestly functions an action which some of them deem blasphemous, but she manages to override those concerns more or less through the force of her personality. Female ambition and power are the themes of the novel as Marie continues to refuse to acknowledge an inferior position for women in the church.
This narrative is essentially without men except as incidental characters. It focuses tightly on the grand life of one remarkable woman. She started as an orphan who was entrusted with the lives of others and through the force of her will, she molded them from a group of weak and dying women into a strong and resourceful community. We follow Marie year after year as she completes this work and through all those years up until the time of Eleanor's death she continues to love her from afar and to hope that she will some day retire to the nunnery that she has transformed. Alas, it is not to be. It is one of the few but defining disappointments of her life.
Marie is not always an entirely lovable character but one always has to admire her strength and the fact that she remains true to her vision throughout. It makes for a compelling and entertaining story.
My rating: 5 of 5 stars
books Lauren Groff reading reviews