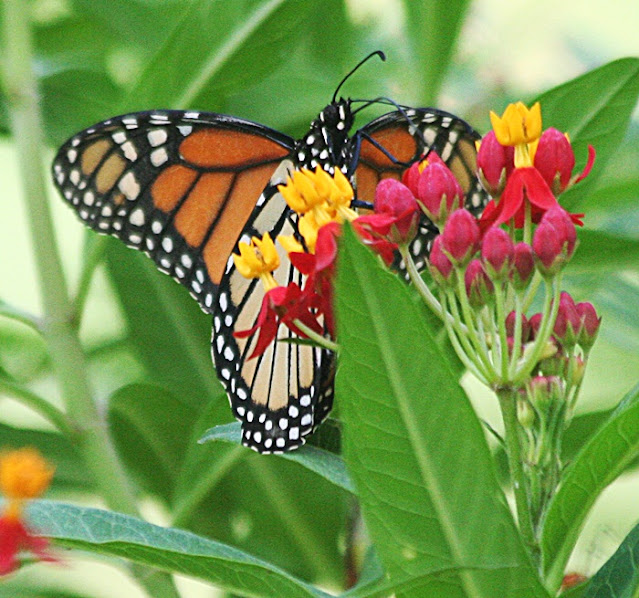 The yard has been unusually quiet of bird activity this week, but we have had a lot of silent visitors. Monarch butterflies have been passing through on migration. Every time I've been outside this week I've seen them. This one is sipping from some tropical milkweed.
*~*~*~*
The good news is there has been progress on arresting climate change since the Paris accord of 2014. The bad news is it's not enough.
*~*~*~*
As nations prepared for the major climate summit in Glasgow, many vowed to do more to curb their warming, but even if these plans are put into effect, the world would still be on a path to dangerous warming.
*~*~*~*
The Biden administration this week announced plans to rescind two environmental rollbacks that took effect under the previous administration. This will have the effect of restoring habitat protections for endangered plants and wildlife.
*~*~*~*
In Malawi, a center of international illegal wildlife trade, a judge has sentenced a Chinese citizen to as much as 14 years for charges related to illegal wildlife trade of which he had been found guilty. After he serves his sentences, he will be deported to China. This represents a major victory for those seeking to put a stop to this trade.
*~*~*~*
California's historic drought has been interrupted by a historic downpour that extinguished some still smoldering wildfires but also created some flooding. Welcome though the rains were, however, what the state really needs is a wet winter to break the drought. Whether it will get such a winter is problematic.
*~*~*~*
The town of Bunn, North Carolina has a vulture problem. Turkey and Black Vultures have found the town to their liking for some reason, but their droppings and vomit are creating actual damage. Efforts to move the birds have not been successful. Both species are protected so lethal methods cannot be used.
*~*~*~*
Did you ever wonder how animals like elephants got their tusks? And why? Often they are not actually used for fighting, so, in such cases, what purpose do they serve? Evolution has an answer, of course.
*~*~*~*
Evolution also, it seems, produced another previously unknown species in the human line. Researchers have announced the naming of the species. It is called Homo bodoensis and it lived in Africa 500,000 years ago during the Middle Pleistocene Age. According to scientists, it is a direct ancestor of modern humans.
*~*~*~*
The pikas living on the tops of the Cascade Mountains are in a precarious position and could disappear altogether. That would be one more link in the chain of life lost.
*~*~*~*
Like many other groups reassessing their names, the Audubon Naturalist Society has decided to drop Audubon from its name because the man was a slaveholder. The National Audubon Society, the largest group still holding his name, has not to this point announced any change.
*~*~*~*
The effects of climate change are obviously no longer an abstraction, something that will happen in the future. It's happening now and throughout the world, we are seeing not only intense heat waves but also an increase in raging wildfires and in deadly destructive rainfalls.
*~*~*~*
All of that is made worse by China's race to extract more coal to meet its electricity shortage. In doing so, it ignores the risks to miners' safety, the environment, and the economy.
*~*~*~*
Meanwhile, the Arctic is literally melting and the thawing of permafrost threatens to release powerful greenhouse gases that have been trapped there for thousands of years. That could cause irreversible damage to the environment.
*~*~*~*
The Environmental Protection Agency has released an "action plan" which is intended to seek solutions to the many barriers that Native American communities have in securing running water and wastewater services.
*~*~*~*
A group of scientists and ocean life advocates has reported that the population of the North Atlantic right whale fell by 10 percent in the last year. In 2019, there were 366 of the whales left alive. In 2020, that dropped to 336, the lowest number in nearly twenty years.
*~*~*~*
Last year, the Hawaii state legislature passed a law that blocks new utility contracts for coal power. The purpose of the Act is to eliminate the use of coal for producing electricity. Moreover, a 2015 law mandates that all power in the state be 100 percent renewable by 2045.
*~*~*~*
Hi-tech is being brought into the battle to save honeybees from destruction. An array of methods is being used to help manage and protect beehive colonies from collapse. Those methods include artificial intelligence programs that can game out the future health of colonies and make adjustments to keep them healthy.
*~*~*~*
Nuclear reactors are part of France's plan for carbon-neutral goals at the cheapest cost. A new report says that it must build fourteen new reactors alongside a surge in renewables investment if they are to meet their goals by 2050.
*~*~*~*
When you think of New York City, you probably don't think of it as teeming with wildlife, but apparently, you would be wrong. There is actually an amazingly diverse population of wildlife from eagles, beavers, and sea turtles to bats, coyotes, bobcats, and mink.
weekly roundup