His Only Wife by Peace Adzo Medie: A review 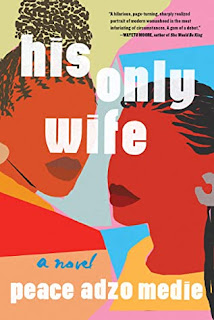 Peace Adzo Medie's novel masquerades as a take on the old fairy tale trope - poor but beautiful girl marries a rich and handsome man and they live happily ever after. But don't be fooled. This is a feminist manifesto about a young woman who is stronger than she ever dreamed she was and who dares to make an independent life for herself.
The novel is set in Medie's home country, Ghana. Her protagonist is young Afi Tekple. Afi had hoped to go to university along with the rest of her friends but in the end, she wasn't able to win entry there and had to settle for staying in her small town with her widowed mother and working as a seamstress. She and her mother exist on the forbearance of Afi's uncle who gives them a home along with his many wives and children. It's hardly a comfortable existence but there are few options available for two women without a husband and father in Ghanaian village life.
Afi's mother works for a rich woman named Faustina Ganyo and she has her eye on Afi. Faustina's son, Elikem, is a rich and powerful young entrepreneur. Unfortunately (in Faustina's view), he is involved in a long-term relationship with a woman whom the family will not accept and if the family doesn't accept her, they can never be married. But they have a daughter together, a daughter who has sickle cell anemia, and Elikem is devoted to her. Truth be told, he is devoted to the mother of his daughter as well, the woman that his family refers to as "That Liberian woman!" Faustina is determined to win him away from this relationship and she has a plan. She will arrange a marriage between her son and Afi. Afi will be "his only wife." She makes the proposal to Afi's mother and she readily accepts. The deal is struck and the marriage is arranged.

“Elikem married me in absentia; he did not come to our wedding.”

And that should have been Afi's first clue that this will not be a normal marriage. Her groom sends a surrogate to take the vows for him. He cannot be bothered. He is very busy and important. After the ceremony, Afi and her mother are whisked off to Accra to a life of wealth and ease that they could scarcely have dreamed of. Wealth and ease but no husband. Eli's family assures Afi that he will show up soon and that she should make herself beautiful and ready to greet him, but time goes by and no Eli.

When he does finally show up, he is handsome and kindly beyond Afi's dreams and she is instantly in love with him. They get along well in their initial meeting but then he leaves with no indication as to when he will return. But he suggested to Afi that in order to fill her time, she might want to enroll in a school to hone her skills as a seamstress and to teach her more about designing clothes since that is her passion. It's a suggestion that she readily accepts.

Afi still dreams of having a real marriage with Eli, but now she has a new dream as well. She wants to develop her talents and make a name for herself in the fashion world. So this is where the fairy tale trope diverges. Afi did not require saving by the handsome prince; she found the will to save herself and learned that she had strengths that she had hardly even imagined. And when she finally meets "That Liberian woman!" she is in for even more of a revelation.

In a sense, Medie's book does have a fairy tale ending but it is definitely a modern version of that. She has given the whole thing a contemporary spin and has explored how an independent woman is able to navigate her way through a strongly patriarchal society and still manage to maintain her integrity and reach her potential. As I said: A kind of feminist manifesto.

I finished reading this book a couple of weeks ago and tentatively awarded it four stars, but I've had time to consider that now and I can't think of anything about the book that I would change. I think that translates to five stars.