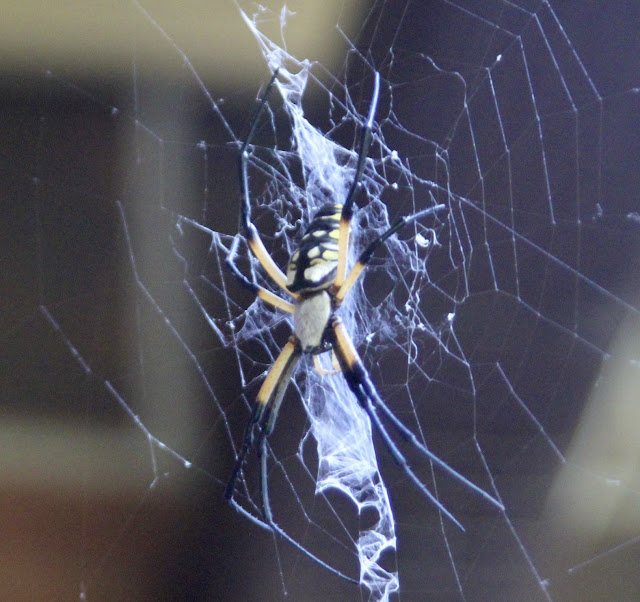 What kind of bird is this, you ask? I thought I would give you something completely different this week in honor of the season. This is my friend who lives just outside my office window these days. She is a golden garden spider, Argiope aurantia. Golden garden spiders, in fact most spiders, are our friends and allies. They have a voracious appetite for insects and are very efficient predators. They are able to subdue and eat prey twice their size. These spiders are sometimes called the "writing spiders" because of the squiggles they put in their webs. It was such a spider that was the inspiration for E.B. White's Charlotte's Web. If you are lucky enough to have one around your yard - and they are most often seen in the fall - please be kind and don't disturb her. She's doing important work. My friend's name is Charlotte, of course.
*~*~*~*
The United Nations biodiversity conference, meeting in China this week, has not received much notice in the press but it represents an important effort by countries to stop the biodiversity collapse which scientists warn could equal climate change as an existential crisis.
*~*~*~*
The Biden administration wants to establish wind farms along almost the entire coastline of the United States. Interior Secretary Deb Haaland has announced that her agency will begin the process of identifying federal waters where the wind farms can be leased.
*~*~*~*
According to research published this week, at least 85% of the world's population has already begun to be affected by climate change.
*~*~*~*
A new kind of perennial grain called Kernza could be what environmentally-friendly farming could look like in the future and it could represent a recipe for fighting climate change and for feeding a hungry world.
*~*~*~* 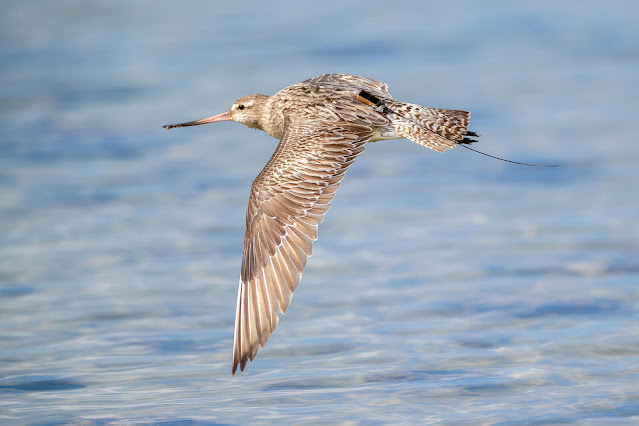 This is a Bar-tailed Godwit in flight wearing a tracking device. These amazing shorebirds can fly more than 7,000 miles non-stop. A research project that has tagged twenty of the birds is now tracking them in real-time.
*~*~*~*
Hawaii which possesses an exceptional richness of unique species is also, unfortunately, the extinction capital of the world. In order to fight against and stop the extinctions, it is necessary to restore biocultural diversity, which is elements of both the natural environment and of native Hawaiian culture.
*~*~*~*
Feral hogs are capable of causing enormous damage to the environment and now they have been confirmed to be in one of Canada's national parks. Hunting them is often counterproductive as firearms can spook the animals. Trapping is generally considered the best option for controlling them.
*~*~*~*
It may seem counterintuitive but apparently, sea otters who uproot sea grass in their search for clams may actually be doing the grass a favor by encouraging it to flower.
*~*~*~* 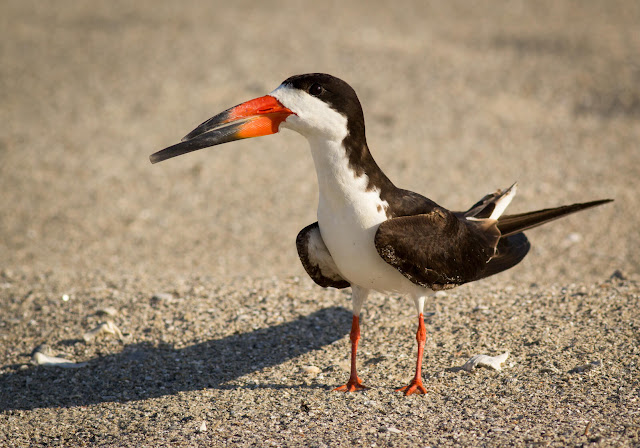 Thanks in part to a project to restore beaches in the southwestern corner of Louisiana, Black Skimmers like this one have successfully nested on the state's mainland for the first time in ten years.
*~*~*~*
The Revelator's species spotlight this week is on the greater hog badger, a small, fearless Asian carnivore that looks a lot like a miniature bear except that it has a piglike snout.
*~*~*~*
After days of high winds increased evaporation rates, the water levels in drought devastated Lake Tahoe fell to the basin's natural rim for the first time since 2017, the end of the state's last drought.
*~*~*~*
There has been a boom in the market for avocados and in Colombia that has led to avocado plants replacing coffee crops in many rural areas. Environmental scientists warn, however, that the switch may have unintended consequences for some local wildlife.
*~*~*~*
A bill that would provide for a coordinated scientific effort to inform effective management and conservation of Saline Lake habitats in the West has been introduced in the U.S. House of Representatives by a Republican and a Democratic House member.
*~*~*~*
Among all the other negative impacts of a loss of biodiversity on the planet, it could be jeopardizing the future discovery of useful drugs.
*~*~*~*
Sawfishes are weird-looking animals, but like all things in Nature their weirdness serves a purpose. But they are vanishing from habitats everywhere. Their extinction would have serious consequences for the environment.
*~*~*~*
Tracking grizzlies as therapy? The activity is actually helping some Canadian veterans recover from the trauma of battle.
*~*~*~*
Communal irrigation systems called acequias have sustained communities, cultures, and birdlife for centuries through recurring droughts in the Southwest, but the current devastating drought is causing them to begin to run dry.
*~*~*~*
A new grant from the National Oceanic and Atmospheric Administration will fund a partnership with stakeholders around the Gulf of Mexico to measure and refine the effectiveness of coastal stewardship to protect birds from human disturbance. It should give birds that breed or overwinter along the Gulf a better chance for survival.
*~*~*~*
Plans to cut down 2,000 acres of beautiful hardwood forest in Tennessee to provide habitat for the endangered Bobwhite Quail is generating opposition from a wide variety of interests across the political spectrum. It seems there may be better options; for example, cutting down nearby state-owned tracts of pine.
*~*~*~*
Finally, enjoy this video of a giant leatherback sea turtle that became stranded on a beach in Cape Cod and was successfully rescued by a group of volunteers.
weekly roundup