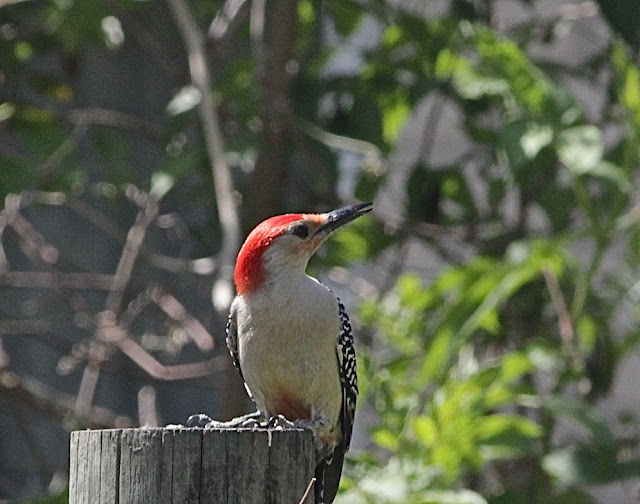 The Red-bellied Woodpecker is one of the most common woodpeckers in our area. He is a permanent resident here. Common he may be but it is always a pleasure to see him in the yard.
*~*~*~*
Three reports released by the Biden administration this week warn of conflicts fueled by the climate crisis. It is likely to aggravate conflicts over water and migration and to cause instability which can threaten global security.
*~*~*~*
Another aspect of the climate crisis is its potential to provide an "emerging threat" to the financial system of this country and to upend global markets and economies.
*~*~*~*
The weather pattern known as La Niña is likely to further prolong the severe drought in the western U.S. this winter but it may bring some relief to Northern California and the Pacific Northwest.
*~*~*~*
Just what are El Niño and La Niña weather patterns anyway and why are weather forecasters always referring to them? Here's an explanation.
*~*~*~*
Factory farms are obviously not environmentally friendly, and they are incubators of disease. They could well be the source of the next pandemic which could be even more deadly than the one we are currently experiencing.
*~*~*~*
The family of chemicals known as "forever chemicals", or PFAS, are found in everything from drinking water to furniture. They have been linked to cancer. The E.P.A. administrator has set regulating those chemicals as one of his priorities.
*~*~*~*
Global heating is hitting wildlife hard right around the world. It is causing problems with fertility, immunity, and behavior with the potential for lethal results.
*~*~*~*
In order to assess the status of a species, it is necessary to know their numbers and how widespread they are. And the only way to really determine that is to count. That's what counting bees is all about.
*~*~*~*
The hippos introduced to Colombia by drug lord Pablo Escobar as a part of his private zoo have more than doubled in numbers since 2012. They have no natural predators to keep them in check. So the country's wildlife services department is engaged in a project to sterilize them in order to control the potentially destructive invasive species.
*~*~*~*
By 2030, the plastics industry in the United States will be releasing more greenhouse gases into the atmosphere than coal-powered electricity generating plants. This is according to a new report released on Thursday.
*~*~*~*
Honestly, it is difficult not to despair at times when one contemplates the damage we have done to our planet and the inadequacy of our response to the problem. But Jane Goodall refuses to despair. She has written a new book, a hopeful guide for the survival of our species.
*~*~*~*
And sometimes when despair for our present circumstances threatens to overwhelm us, it is useful to consider where we have come from, humanity's long history. This is quite a long read, an adaptation from a new history of the species, but if you are interested in our prehistory, it is well worth it and quite fascinating.
*~*~*~*
Discover the wonders of the East African coral reefs with this link.
*~*~*~*
One of the two last living northern white rhinos, both females, has been dropped from the breeding project which hopes to use preserved sperm from dead males to create an embryo that would then be implanted in a more abundant species of rhino.
*~*~*~*
Remember the tragic story of the young family and their dog who mysteriously died from unknown causes while hiking in Sierra National Forest? It has taken several weeks but post mortem examinations have finally determined that their deaths were caused by heat exposure and possible dehydration. Temperatures on the trail they were hiking had reached 107 to 109 degrees Fahrenheit on the day of their deaths.
*~*~*~*
Northern peatlands are a carbon sink that helps to cool the planet, but the heating climate may be turning them into a carbon bomb which will make global warming even worse.
*~*~*~*
The World Meteorological Organization, along with other agencies, released a report this week stating that climate change threatens to destroy Africa's rare glaciers within the next two decades. The continent that contributes the least to global warming will likely suffer from it the most.
*~*~*~*
The Stads K'un is a genetically unique subspecies of the Northern Goshawk that is one of the most endangered species on the planet. The search is on in British Columbia to locate habitats of the bird so that they can be protected from logging and habitat loss.
*~*~*~*
The Environmental Protection Agency has located more than 120,000 locations around the country where people may be exposed to the toxic "forever chemicals." Colorado tops the list with an estimated 21,400 such facilities.
*~*~*~*
Russia is allowing massive leaks of methane, as shown by satellites, to the planet's peril.
*~*~*~*
Environmental themes seem to be very popular with novelists this year. Here is a list of twelve such novels that have been released this year.
*~*~*~*
There has long been justifiable concern about the decreasing numbers of western Monarch butterflies, but here's some good news on that score: This week thousands of the butterflies returned to a sanctuary in California.
weekly roundup